A short, sharp camp on Bleaklow

Our friend James was off on a quick overnight camp on Bleaklow with his staffie, Reuben. On a whim, I said me an' Tilly would join him. So James picked us up from home late Friday afternoon and, leaving his car in Old Glossop, we set off in the heat up, via Yellowslacks. 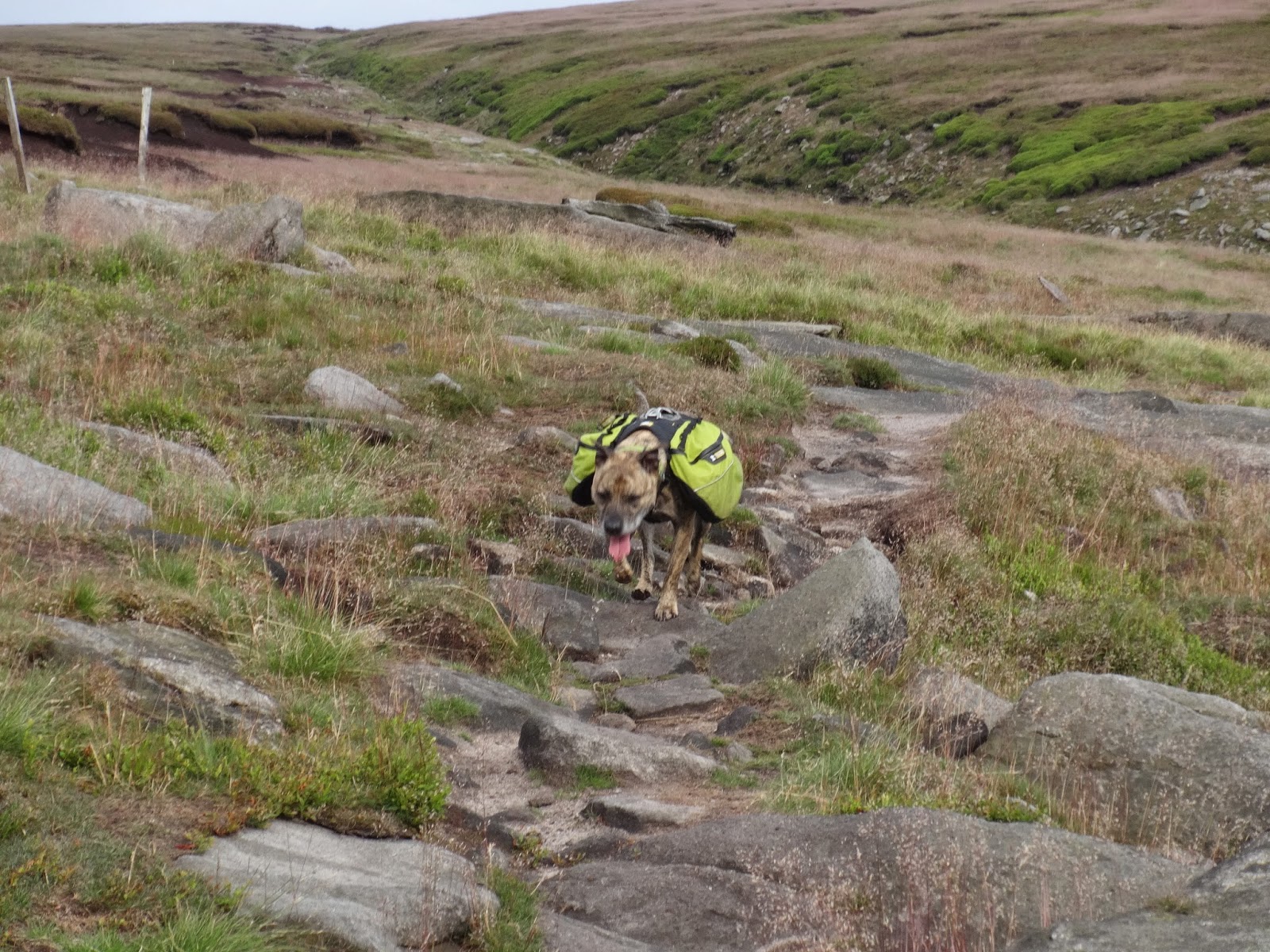 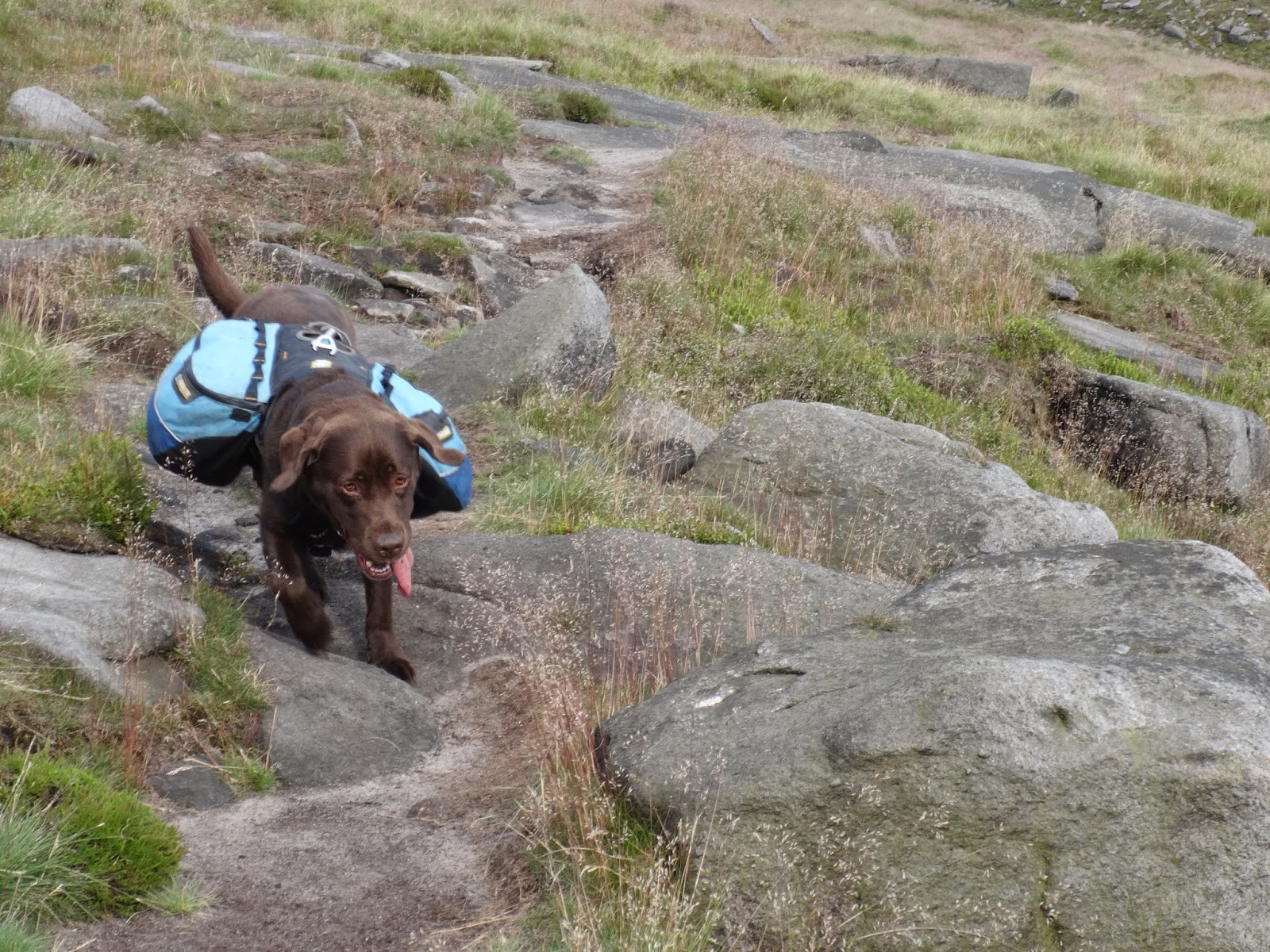 James is off on a backpacking trip to Swedish Lapland soon. Concerned about the weight he'll be carrying over 8 days, he was using this as a trial. Expecting no water at our proposed camp, we were both toting around 5 litres of the wet stuff. Coincidentally, both our packs weighed the same ... 20kg! That equated to James' estimate for his Swedish trip. 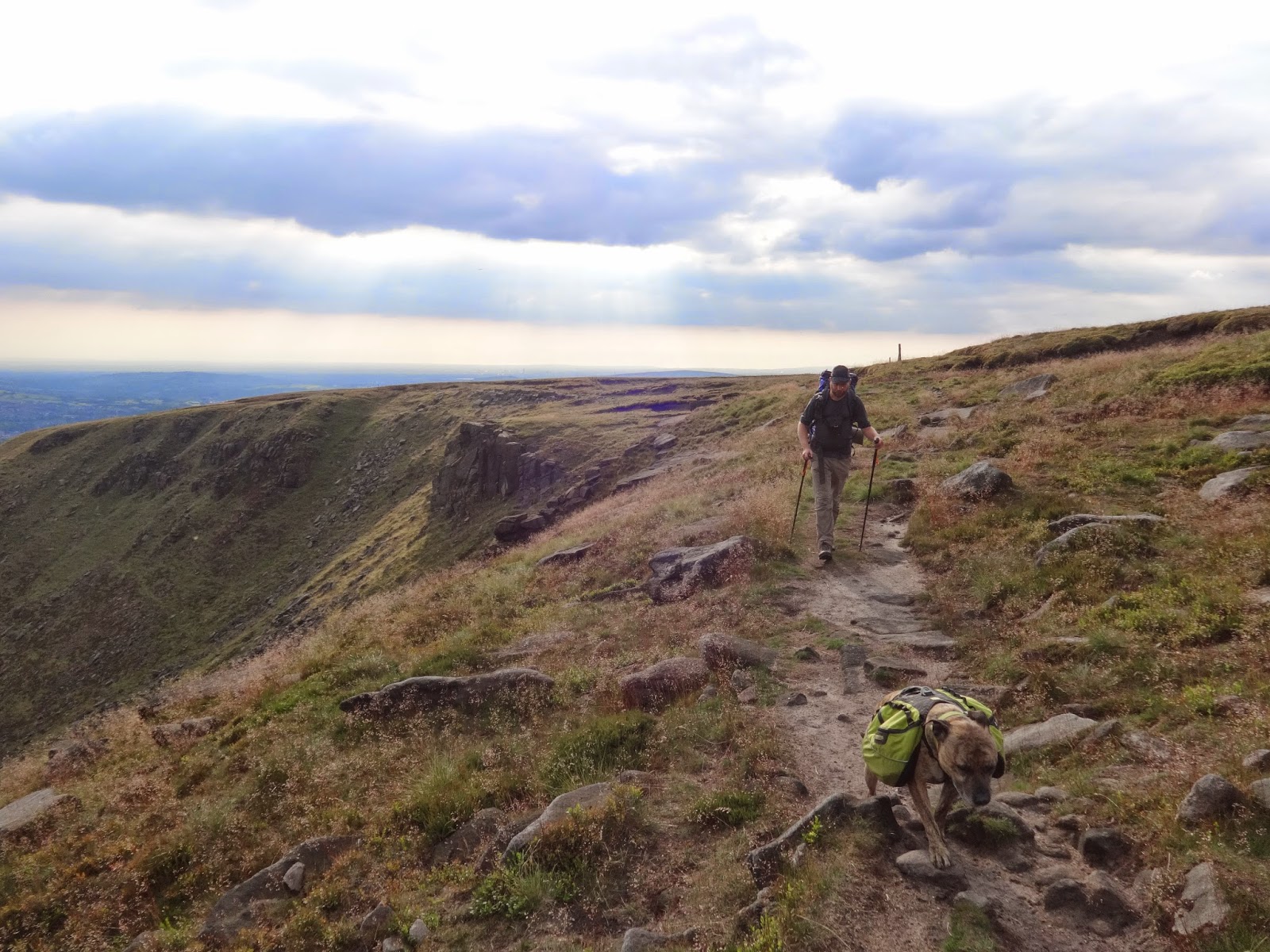 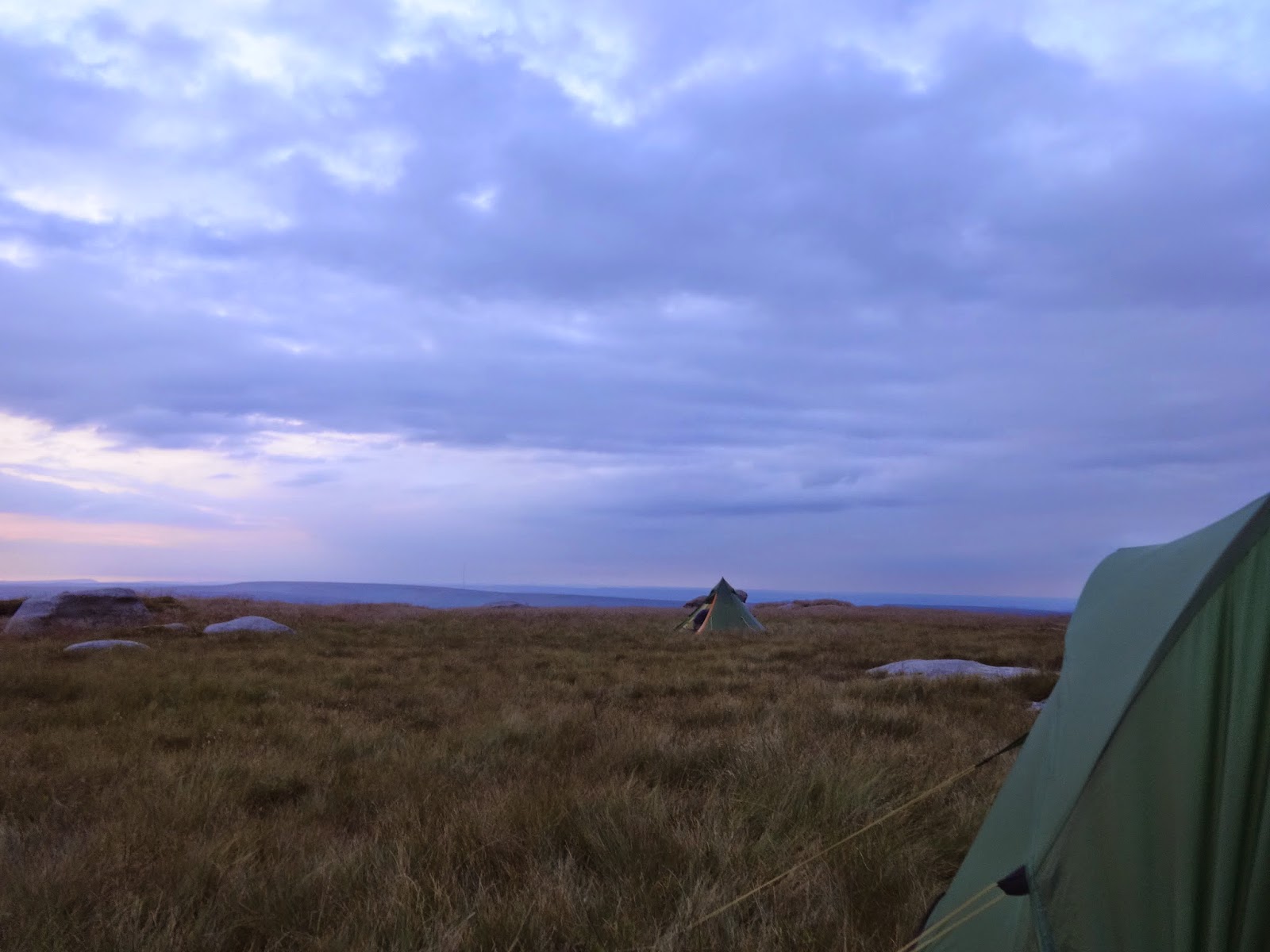 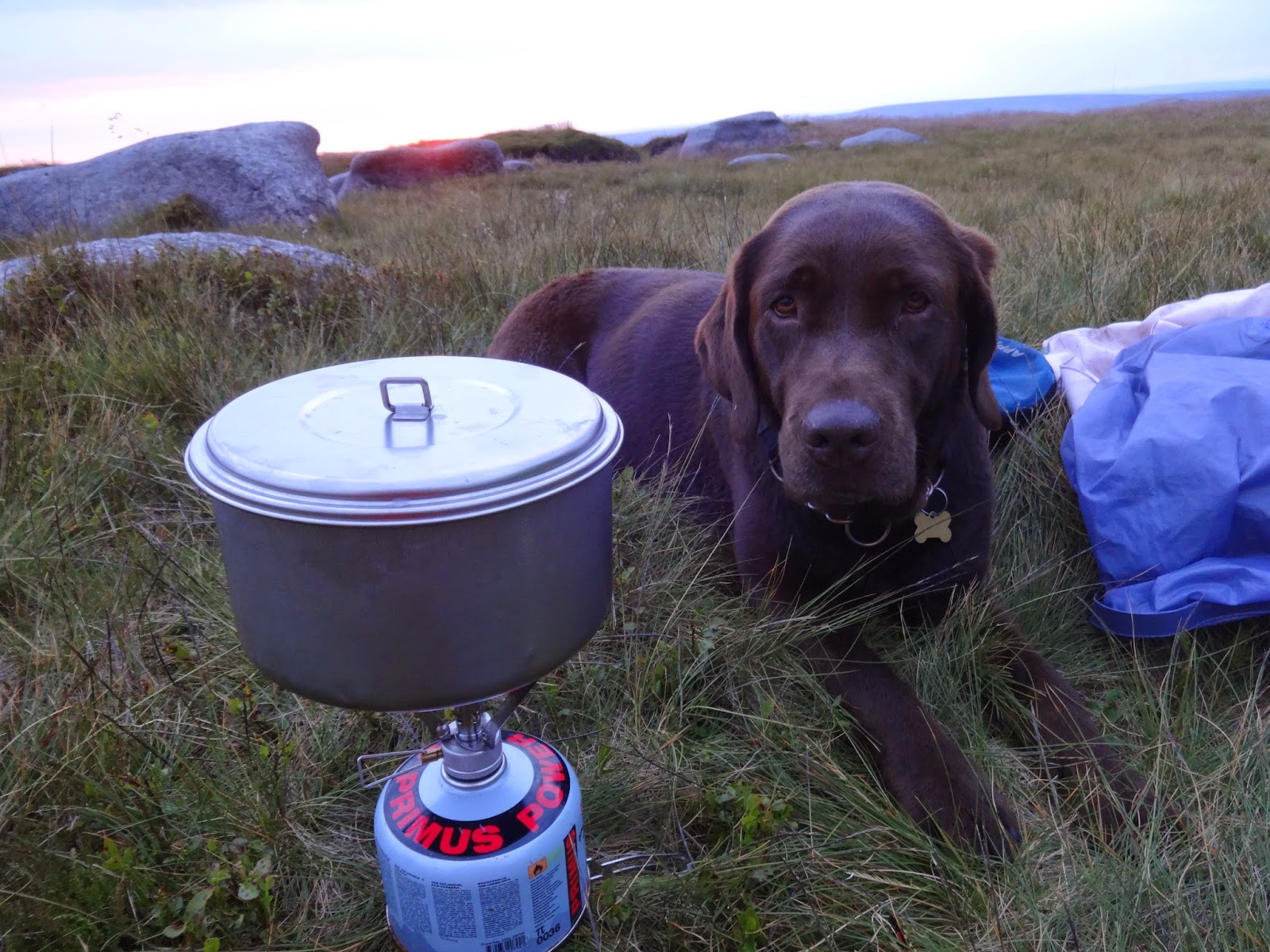 Sadly, for her, it was nowt but hot water, to rehydrate my backpacking meal. To be fair  ... as usual, I'd fed her first.

We had a beautiful sunset. 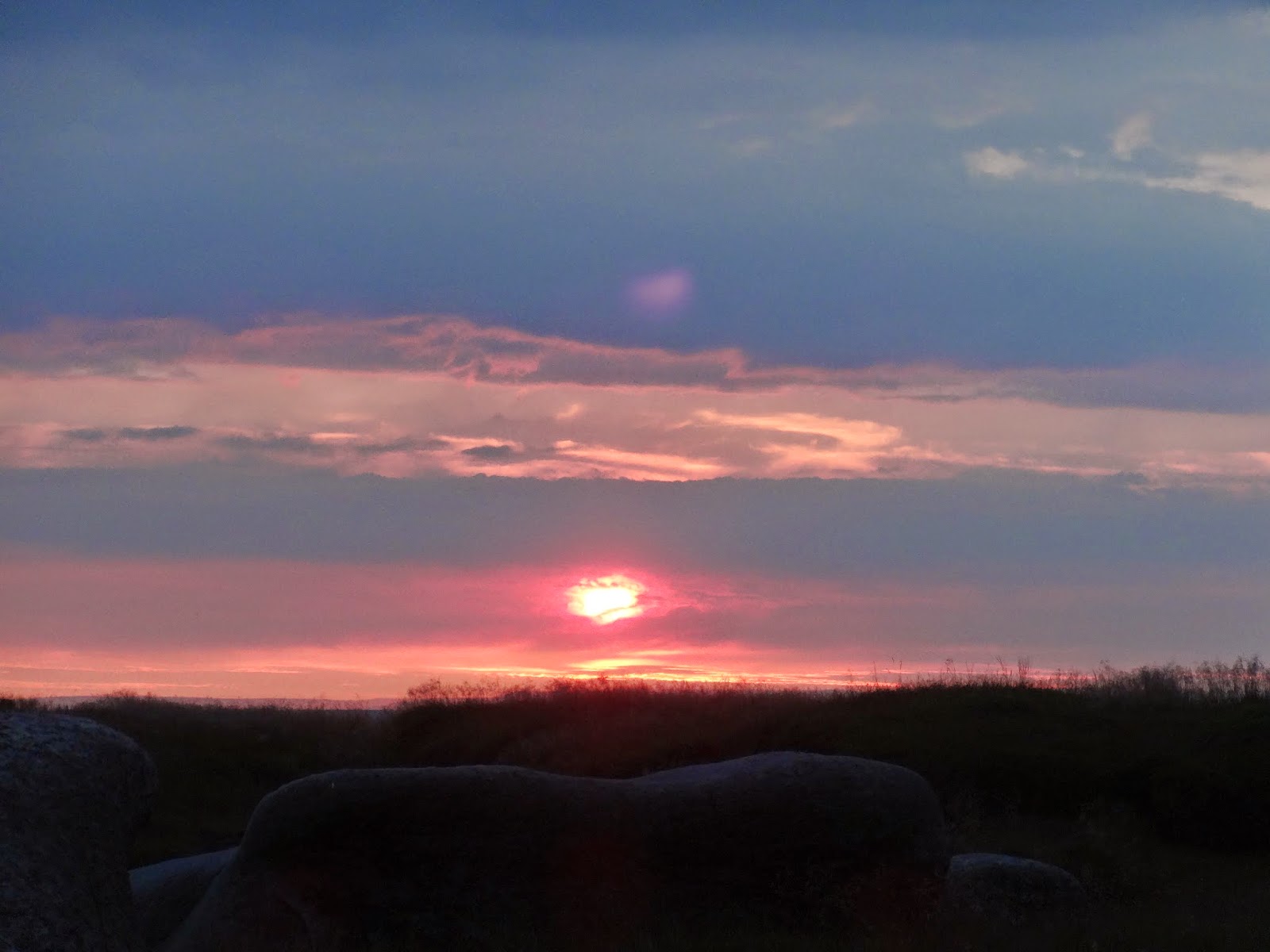 At 4:30am Tilly heard noises from James' tent. She insisted on getting up for a pee. I forced her back into the tent and settled back into my bag. But Tilly was havin' none o' that. She wanted to get up. She whined, winged and pawed me. At 5am I let her out again for a poo and a drink. She came back but still continued to whine. I ignored her and slept fitfully until around 6:45 when I eventually gave in to her and got up. 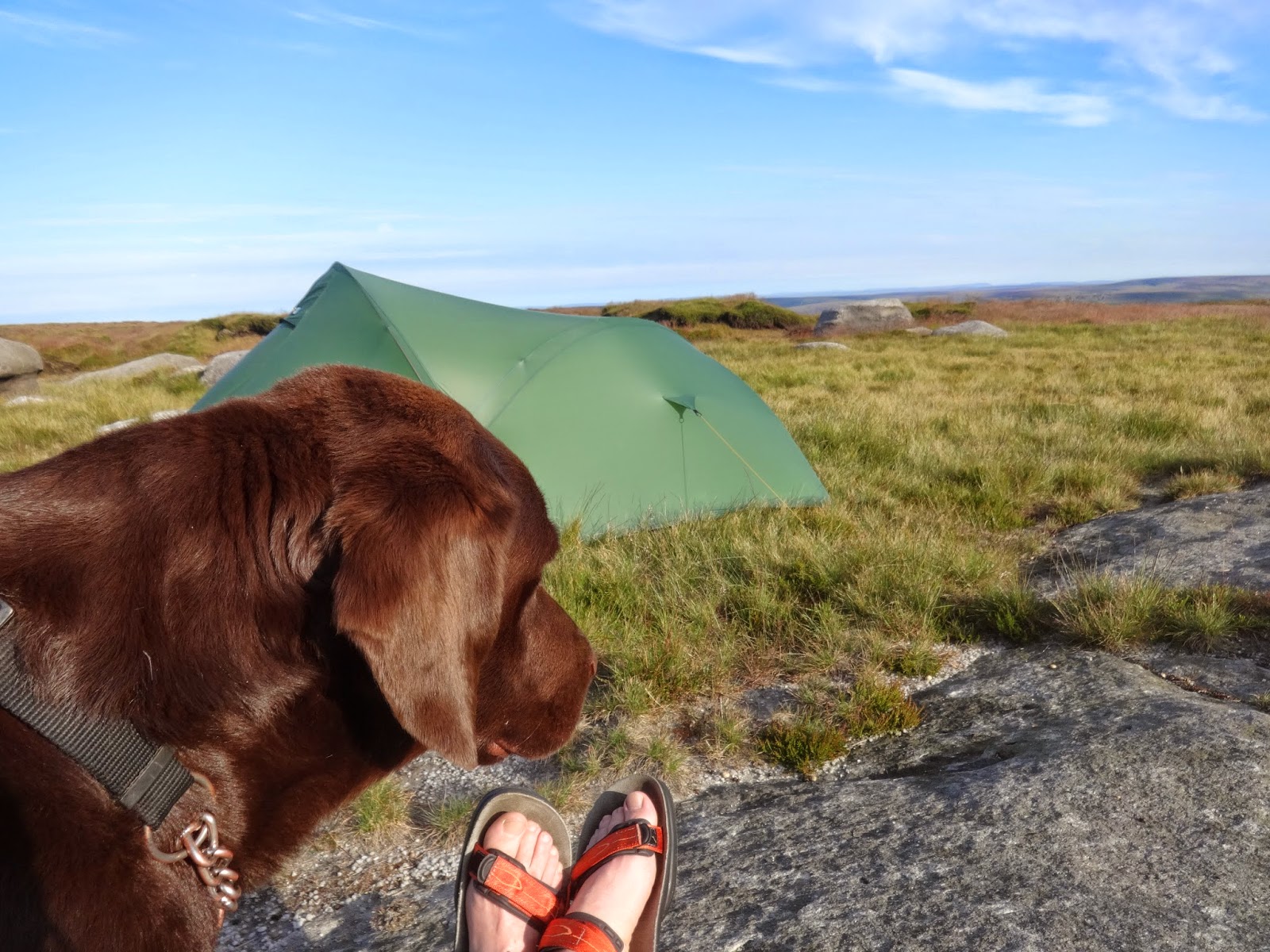 The sky and the views were magnificent. 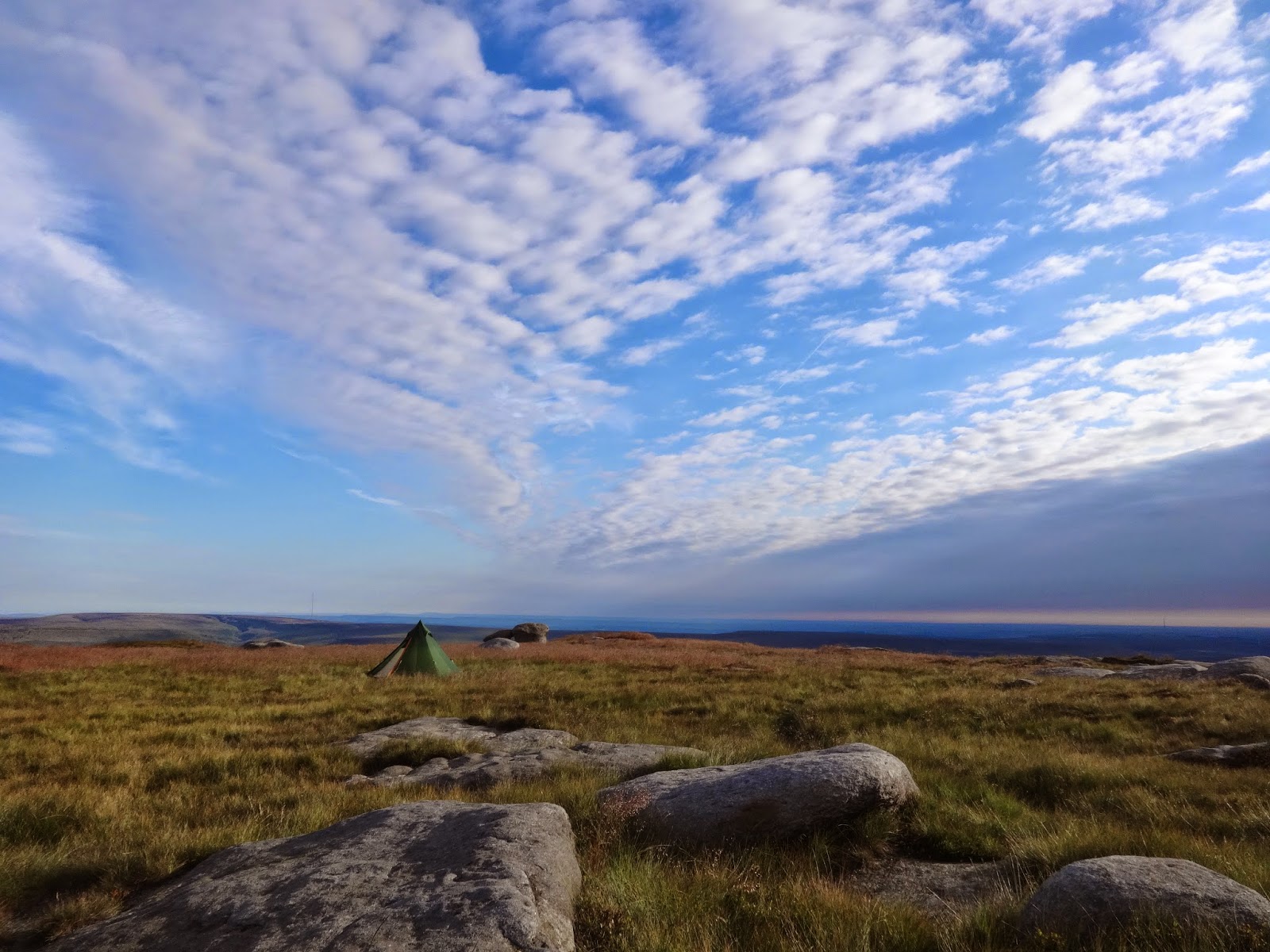 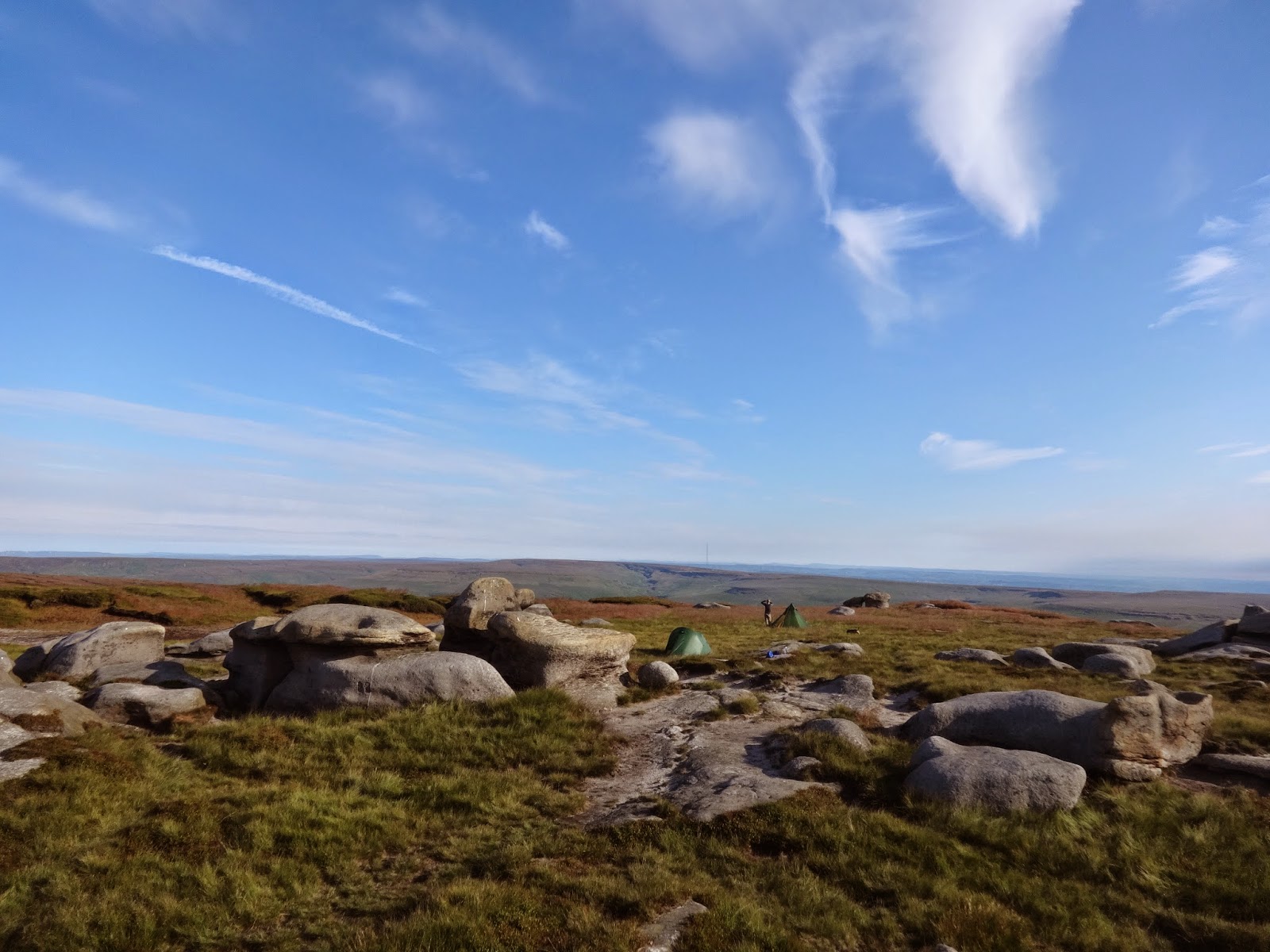 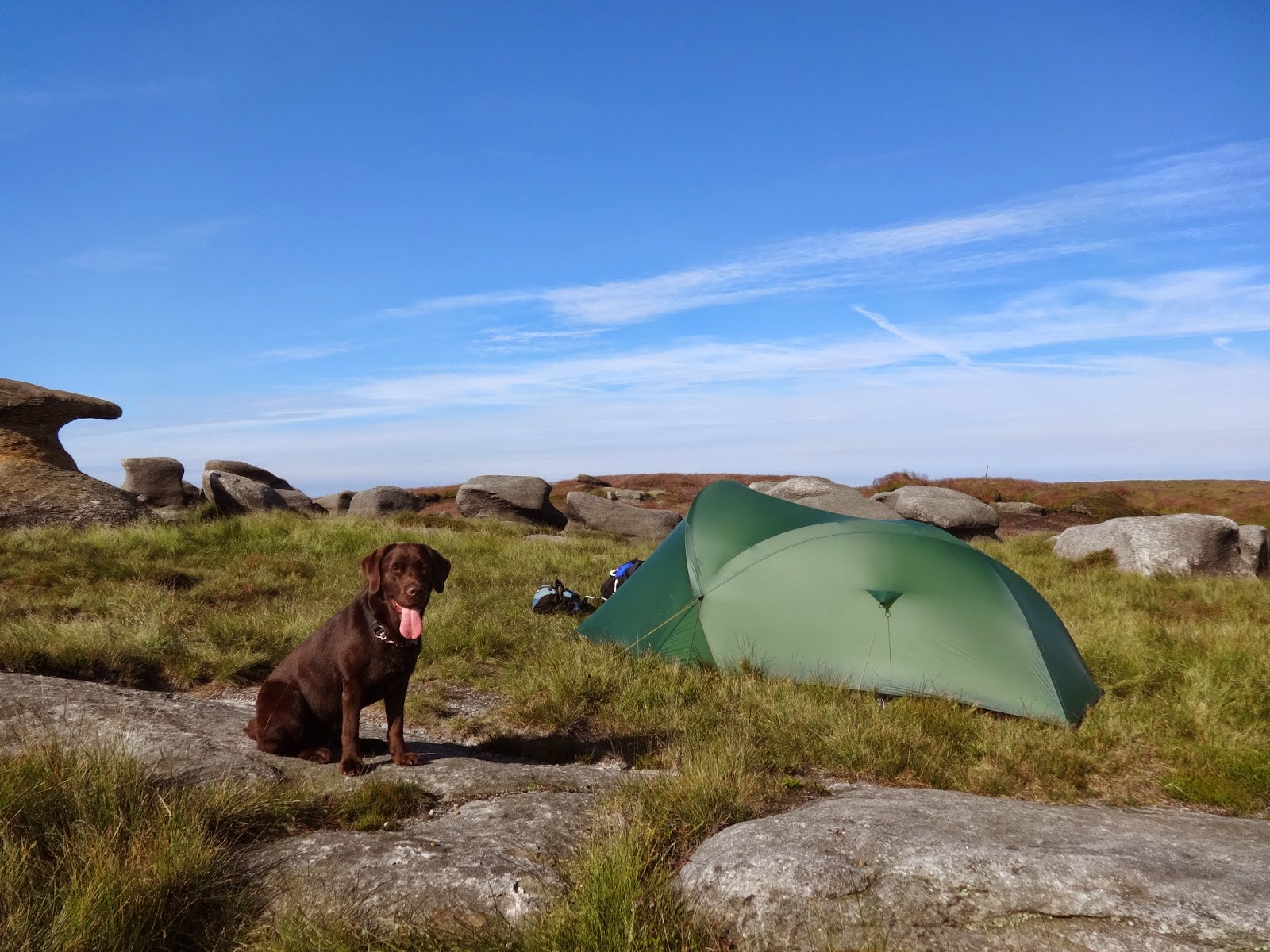 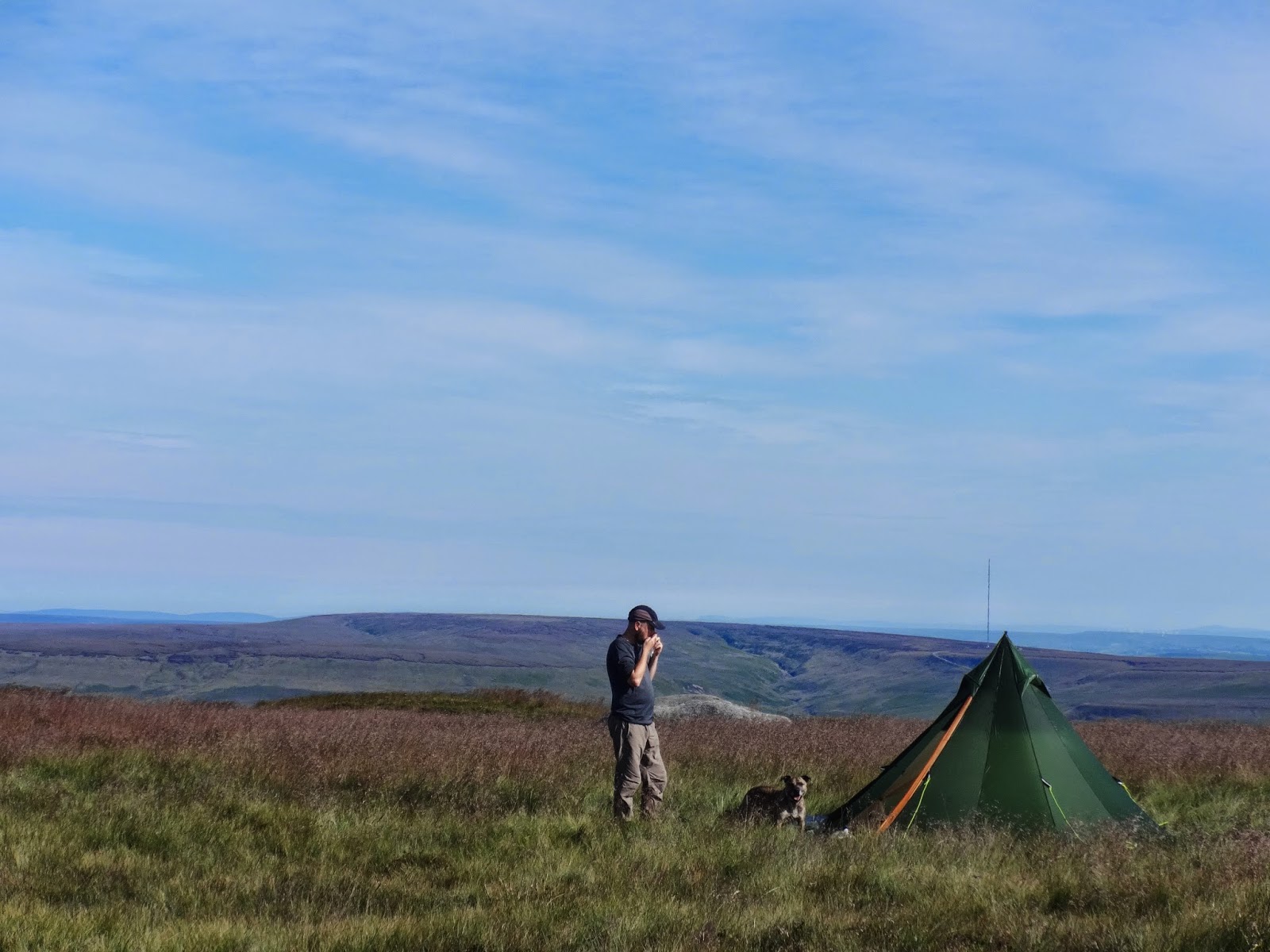 We had a leisurely breakfast and multiple coffees before packing up.

James planned to return to his car via Doctor's Gate, leaving Tilly and I to wander home across Featherbed Moss, then down William Clough back to Hayfield.

Here's my faithful pooch, trudging across the endless flagstones on Featherbed Moss. 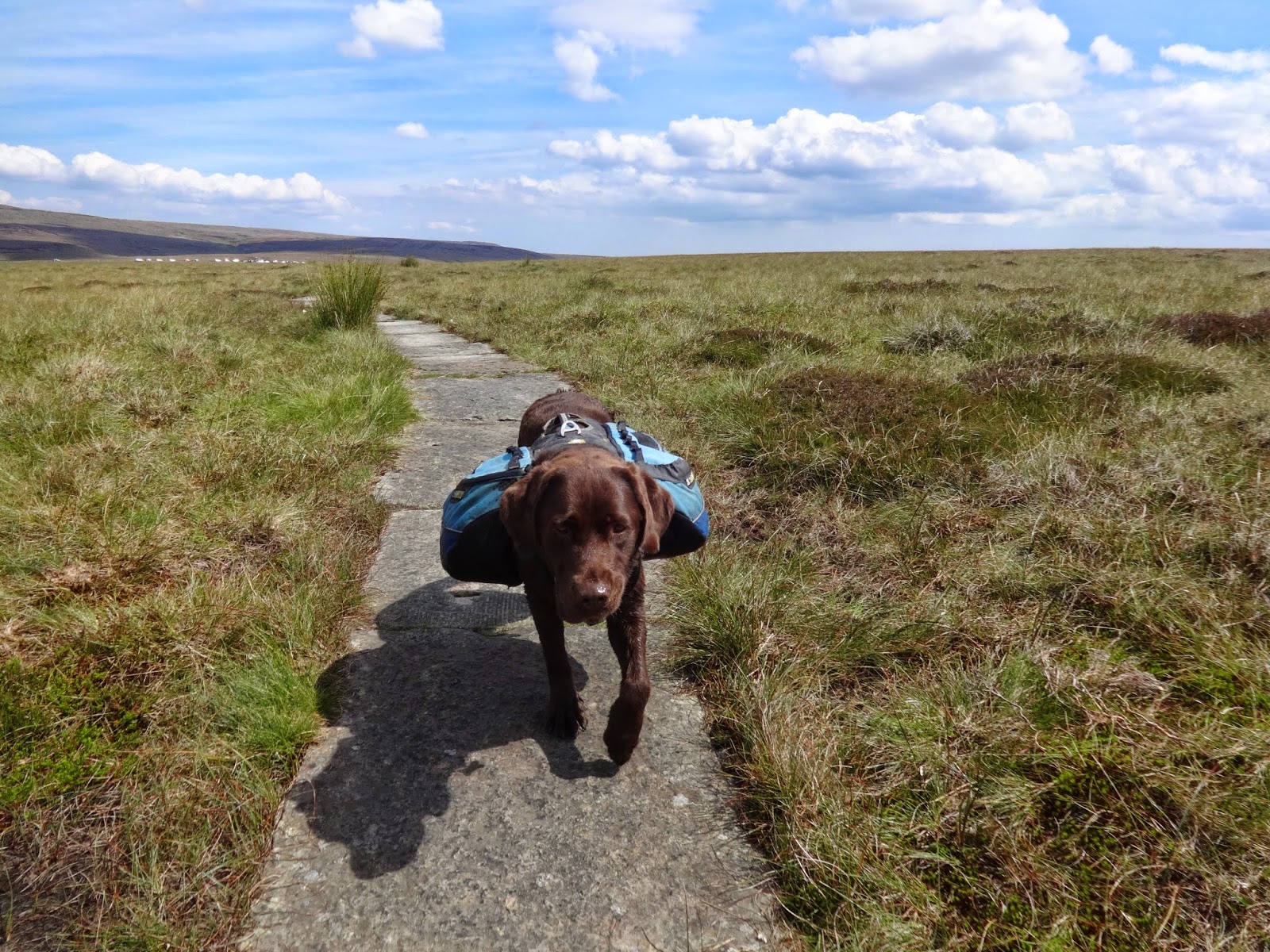 Bless her! She'd carried her water, food and towel all the way. We had a fine old time. The downside? I'd forgotten my trekking poles. And James and I both suffered dreadfully with hayfever. By the time I got home me and my best pal were VERY tired.

Oh, by the way, what had Tilly heard from James' tent at 4:30am? It was the sound of James remonstrating with Reuben for vomiting spectacularly inside the tent. Don't we just love dogs?