Ok, so I said I'd update every month and I haven't. Bin too busy and not a lot to say but now, well it's a new year and we're rapidly approaching the end of January, so only a little over three months to go.

Where am I up to? Since the last update:

i. I wasn't finding the Charge Spoon saddle any more comfy than the original Thorn Velo so I've nicked the one from my Dawes Karakum, which I always found to be fine. Interestingly, when I removed it and turned it upside down I found it's also a Velo, though of a different style to the one Thorn use. It feels like a nice compromise between the very soft original and the quite firm Spoon. So, far, after a few rides, it feels pretty good so I reckon I'll stick with it.

ii. Santa brought me some rather pleasing Christmas pressies, my having been a VERY good boy all year; an Ortlieb Classic handle bar bag, which matches my panniers beautifully, an MSR Pocket Rocket stove (we've used one o' these for years but Chrissie wanted me to have my own in case we're off doing independent stuff at the same time), 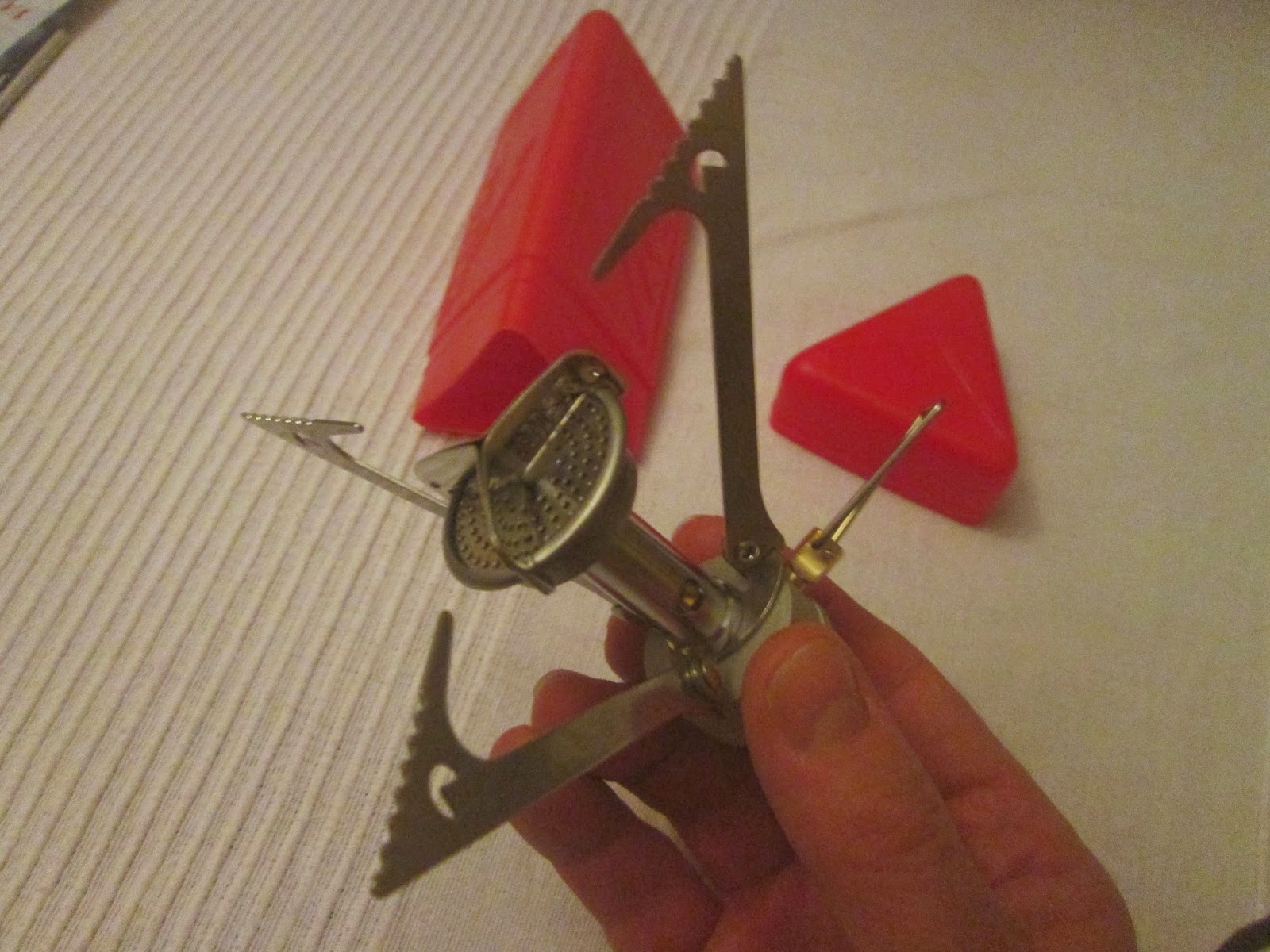 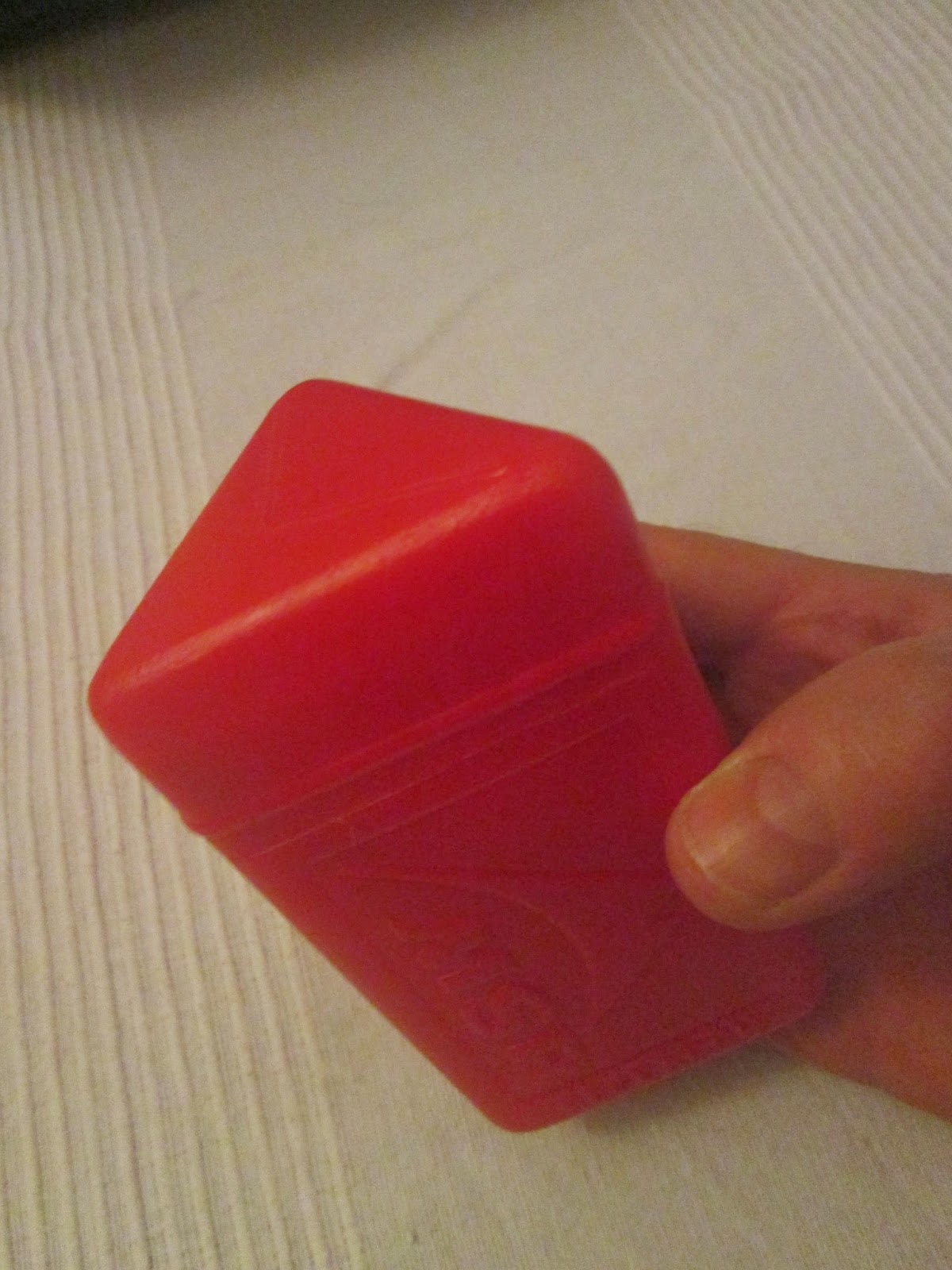 a very smart Evernew Titanium pan, a tiny 0.9 litre one which'll suit me fine when on my own. It has a built-in handle and a lid, 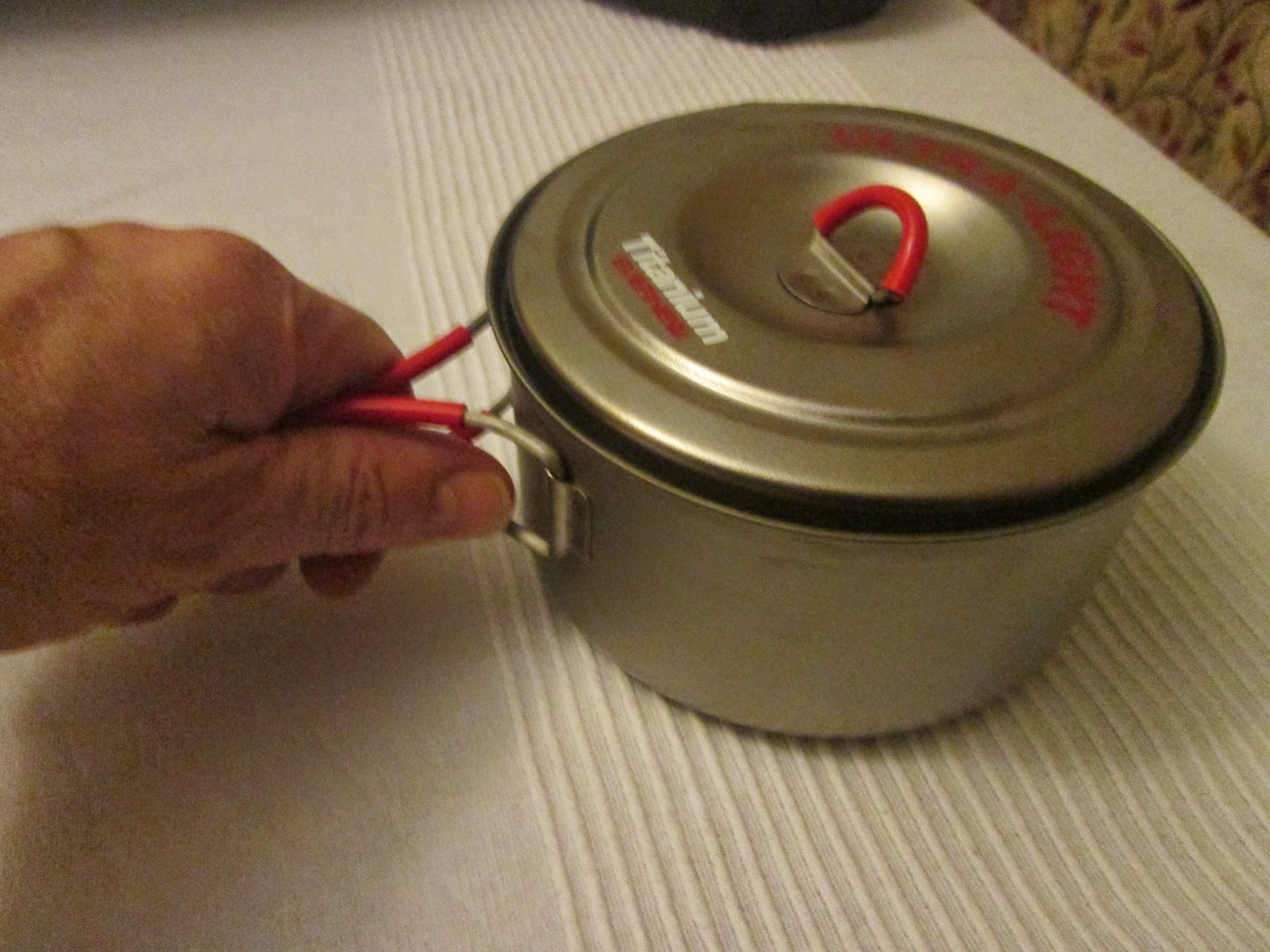 and, lastly, a clever little device called an NBT2, which allows you to remove the rear cassette should you need to replace a cassette-side spoke whilst touring. 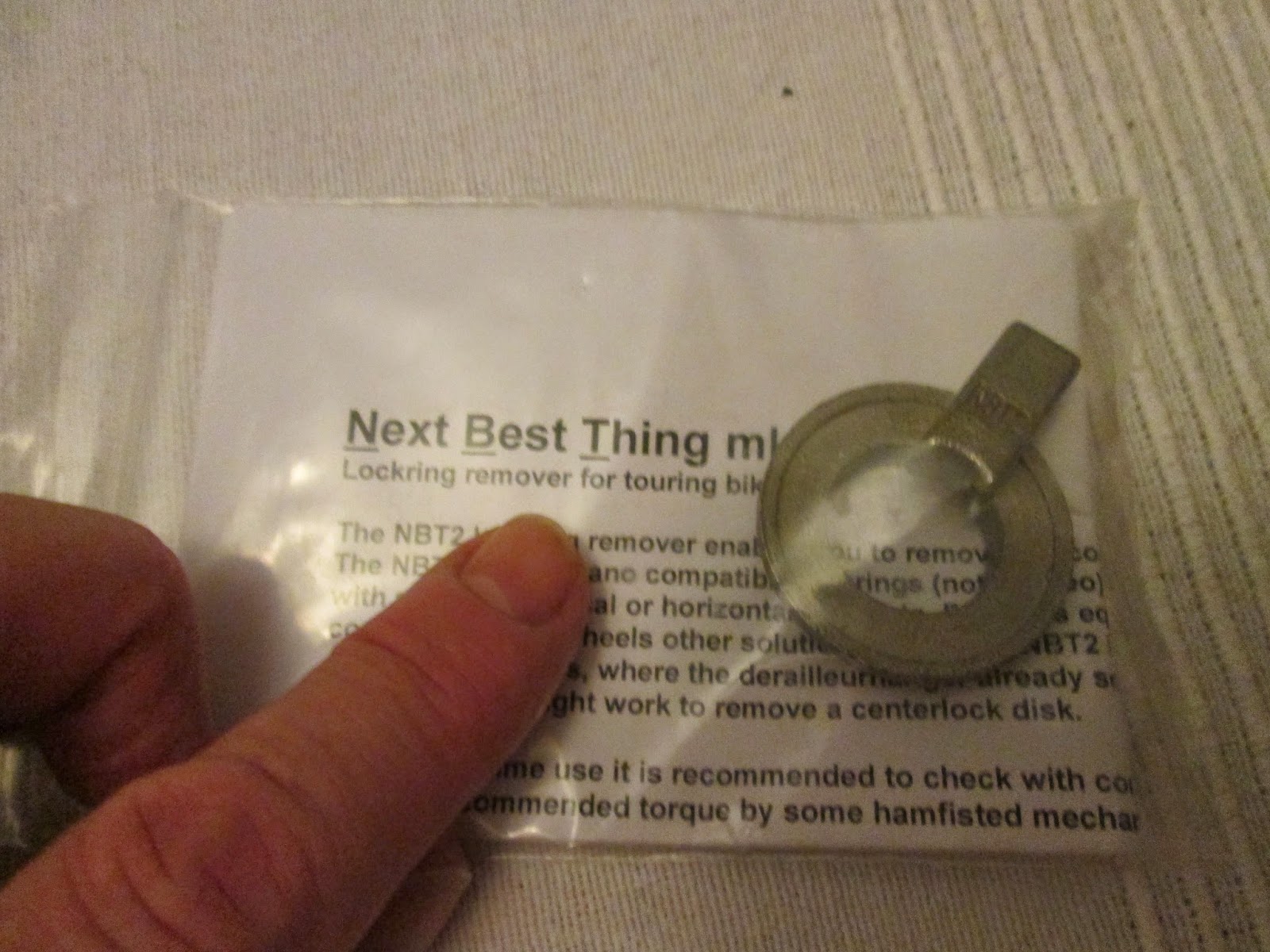 Ain't tried it yet.

To complete my cookset, I bought a windproof lighter and some wind'n'waterproof matches while we were in Aviemore last week. 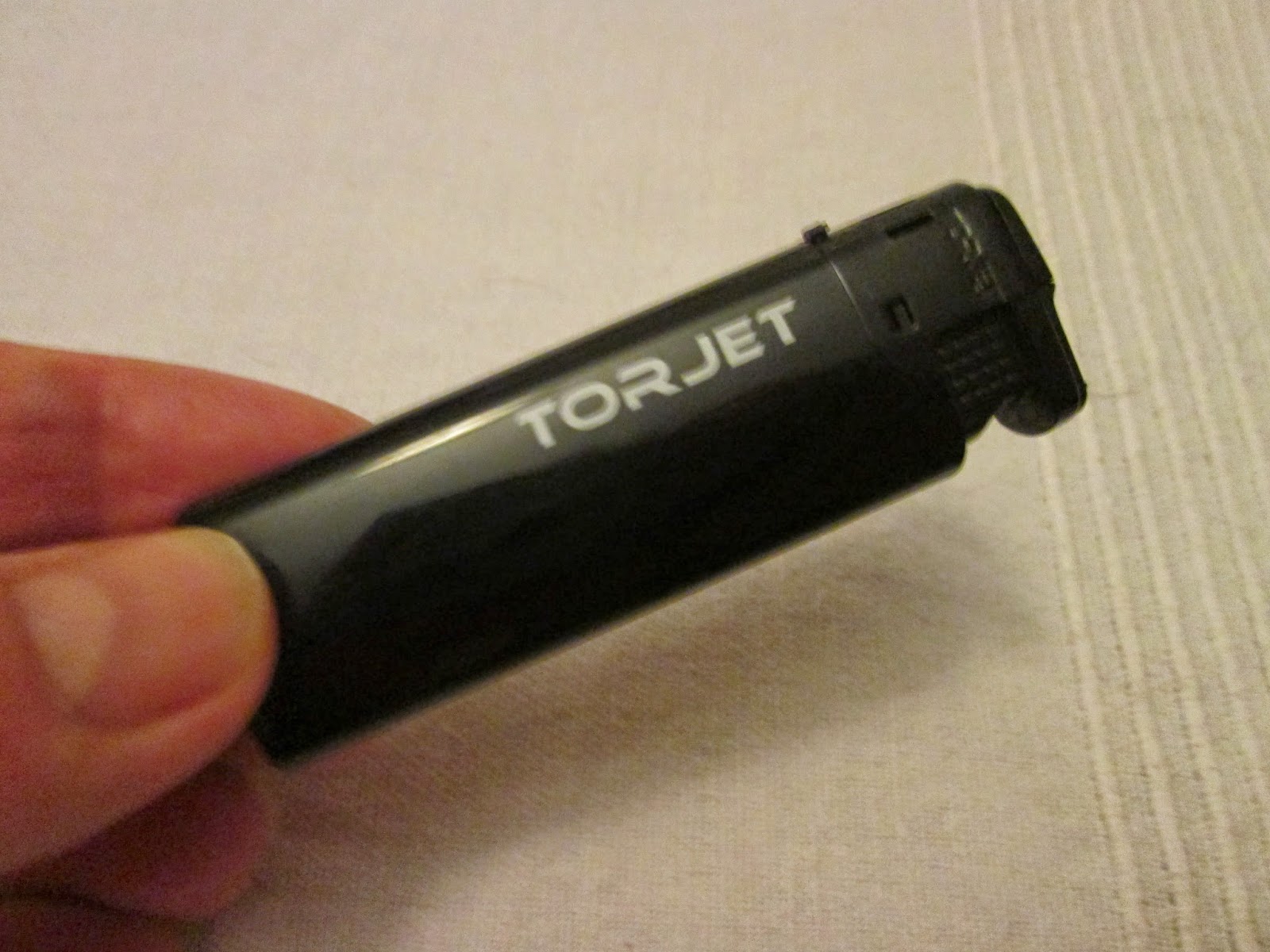 iii. Given I've pretty much settled on my route I've asked Chrissie to come and meet me at a campsite with the camper somewhere not too far from home, maybe the Dales? I plan on staying with her for two nights so I can do some vital washing. I'm gonna take my two favourite Rohan merino wool
t-shirts to wear while riding. I know I can make one of these last a week so the two should see me half way on my, nominally four week, trip. I can wash these on the go if needed but it'd be good to set off again with 'em both freshly laundered.

iv. Again on clothing, I'm gonna buy two, maybe three pairs of Rohan's knickers. I considered merino wool but the going rate's about £30 per pair and I think that's a bit excessive. The Rohan ones have recycled silver in 'em which reduces odours (like merino) and they cost £17 a pair. Off to pick up a long sleeved merino top in a few days from Rohan in Bakewell which I ordered in the sale (£30 off) so I'll see if they have any in stock. I hope this'll mean I only need to take two or three pairs of knickers to last two weeks before meeting Chrissie. On a similar theme I'm gonna buy myself three pairs of shiny new wool socks for the trip, hoping to wear each for three or four days.

v. I bought one of these Sea to Summit collapsible bowls which has a base wot can be used as a chopping board. And Chrissie sneaked off and bought me a tiny salt'n'pepper thingy, vi. Following a recent motorhome trip we came to the conclusion that we couldn't justify the space taken up by our folding chairs. We'd hardly eaten one meal outdoors during a six week summer journey, but we had sat outside having drinks, snacks or reading. We are increasingly using the van to allow us to follow other passions such as cycling or backpacking, both being equipment-heavy hobbies. We needed the space in the van's backbox for rucsacs, bike gear or whatever. So, we made the decision to buy two Helinox Ground Chairs. These amazing designs are very small when packed. 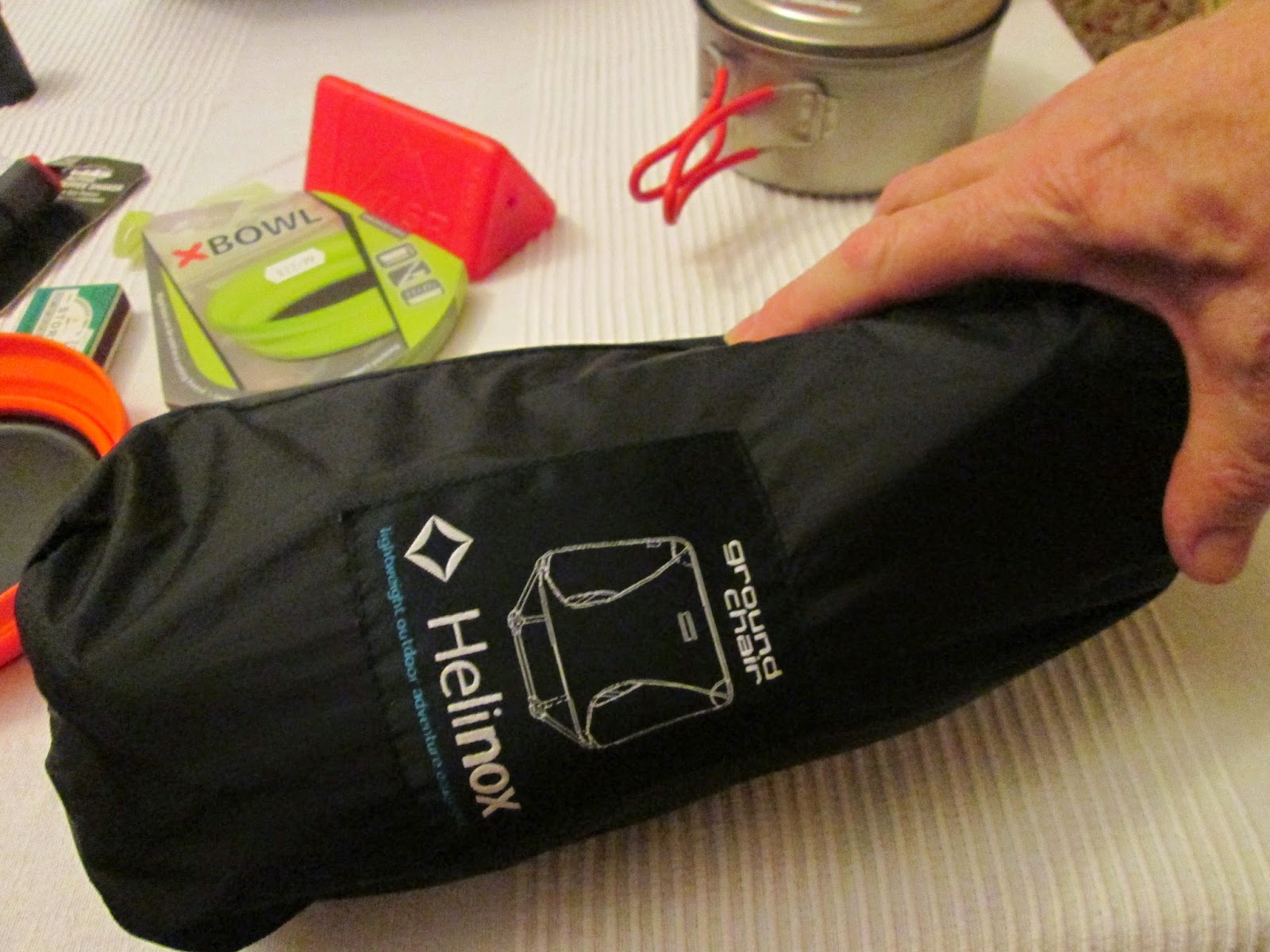 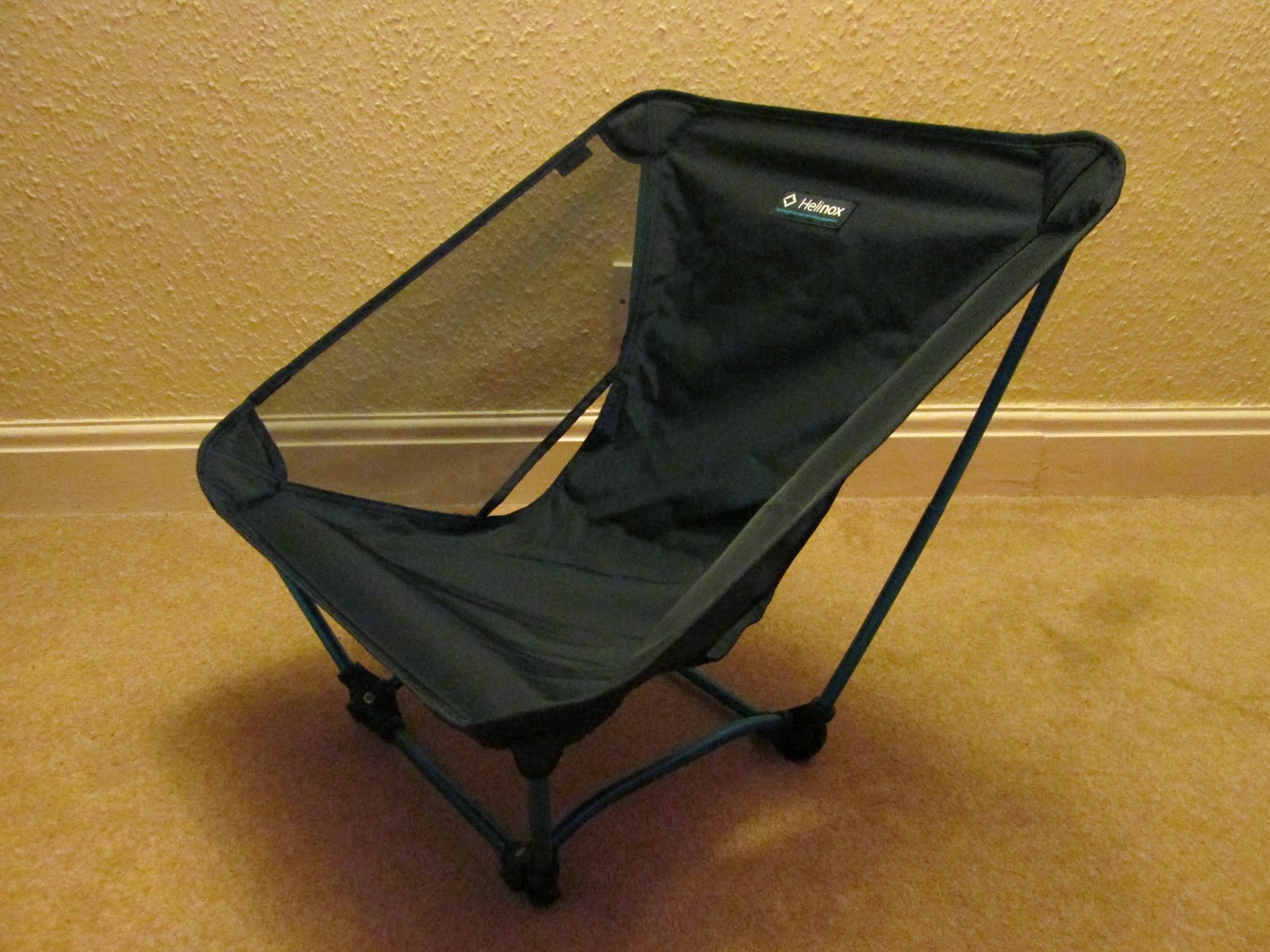 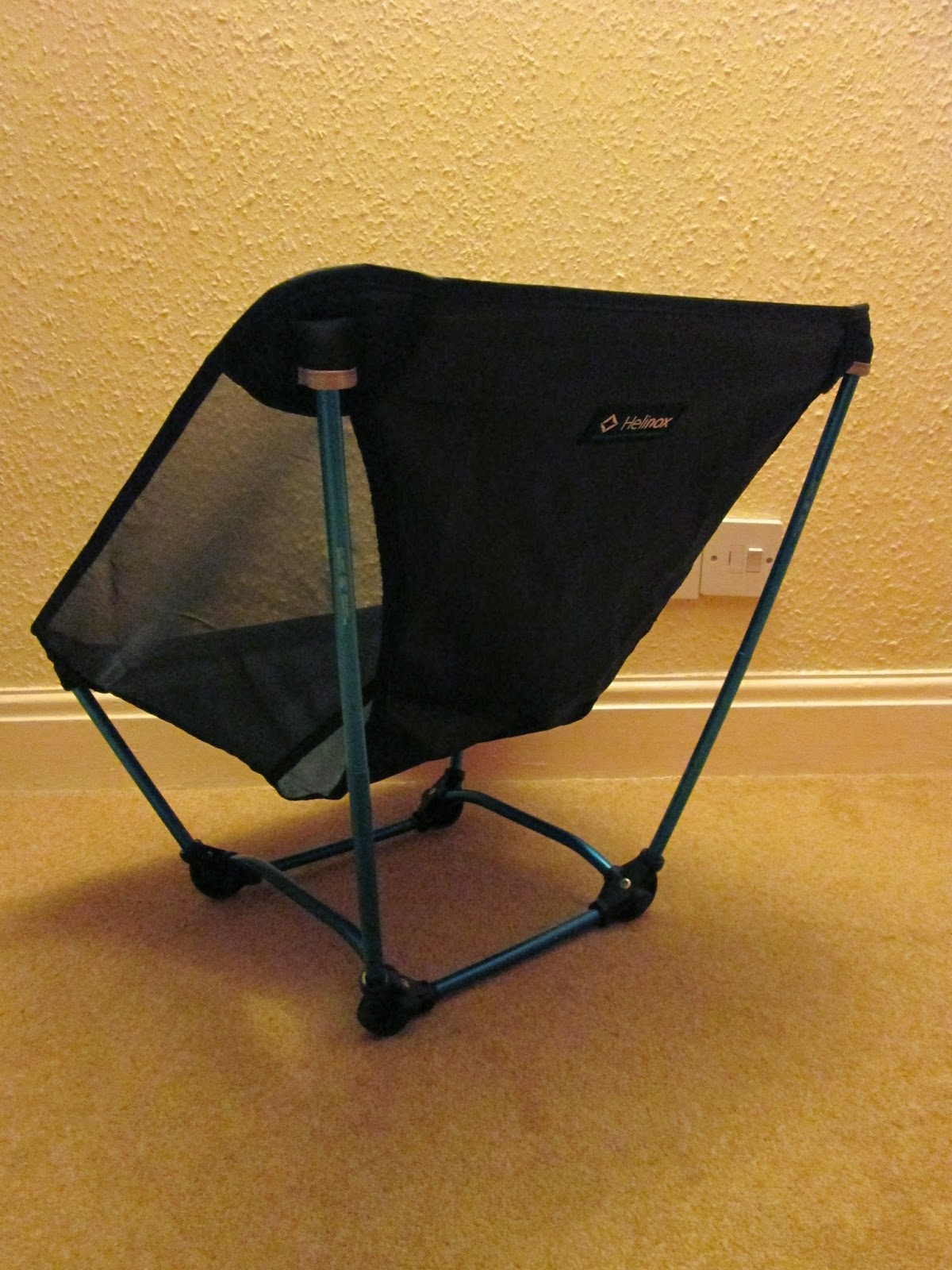 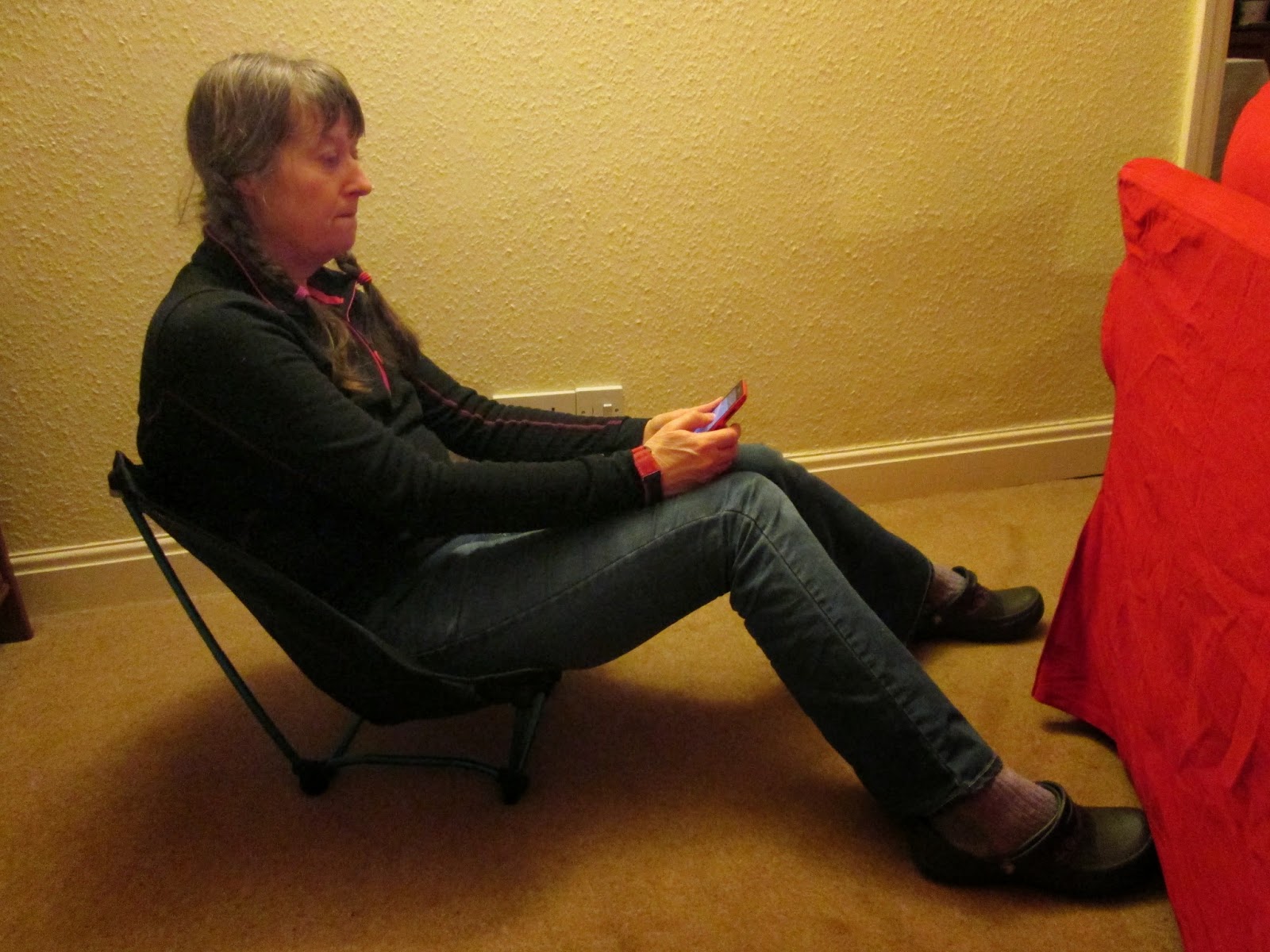 Their only downside being they're very low to the ground, so no use for sitting at a normal height table. Anyhow, I mention all this here cos I'm considering taking one on my End to End trip. I figure the comfort offered around camp will justify the extra 590g. I do embrace lightweight gear but comfort is a major consideration. I reckon I can pack one with my tent on top of my rear rack, though I haven't tried yet. One to try out on an upcoming shakedown trip perhaps.

That's it for now as far as I can remember. We didn't take bikes on our trip up to t'Cairngorms last week; too much other paraphernalia; crampons, axes, snowshoes, mountain boots (none of which got used). So, I ain't been on a bike for about 10 days. MUST get out tomorrow, weather permitting.

If you've only just caught up with this planning malarkey and are interested in the rest of the story, dig about on here for the first two episodes.

Feel free to add a comment or ask any questions on here.

Above all, enjoy your own travels and keep safe.

Posted by Geoff Crowther at 20:15 No comments:

A ride and a resolution, of sorts

Hamish and I set out at 10am for a road bike ride, me on the Cube and Hamish on his, recently rebuilt 1980s Dawes.

I felt like a slightly challenging ride so, we left Hayfield out through New Mills then the A6 to Disley. Here we turned uphill and rode up past the old Moorside Hotel (now a young offenders institution; how the mighty have fallen) then, meeting the road from Whaley Bridge to Macclesfield we turned left to Kettleshulme, then right to climb up towards Windgather rocks. Riding past here towards Pym Chair is a section I've covered many times but today, we had a strong headwind and, despite the modest incline, I couldn't get out of my lowest gear!

Struggling to stay upright in a strong wind at Pym Chair, we turned left to descend into Goyt Valley by the Errwood Reservoir, where we stopped to sup from flasks and consume butties before the grind up to meet the top of Long Hill. 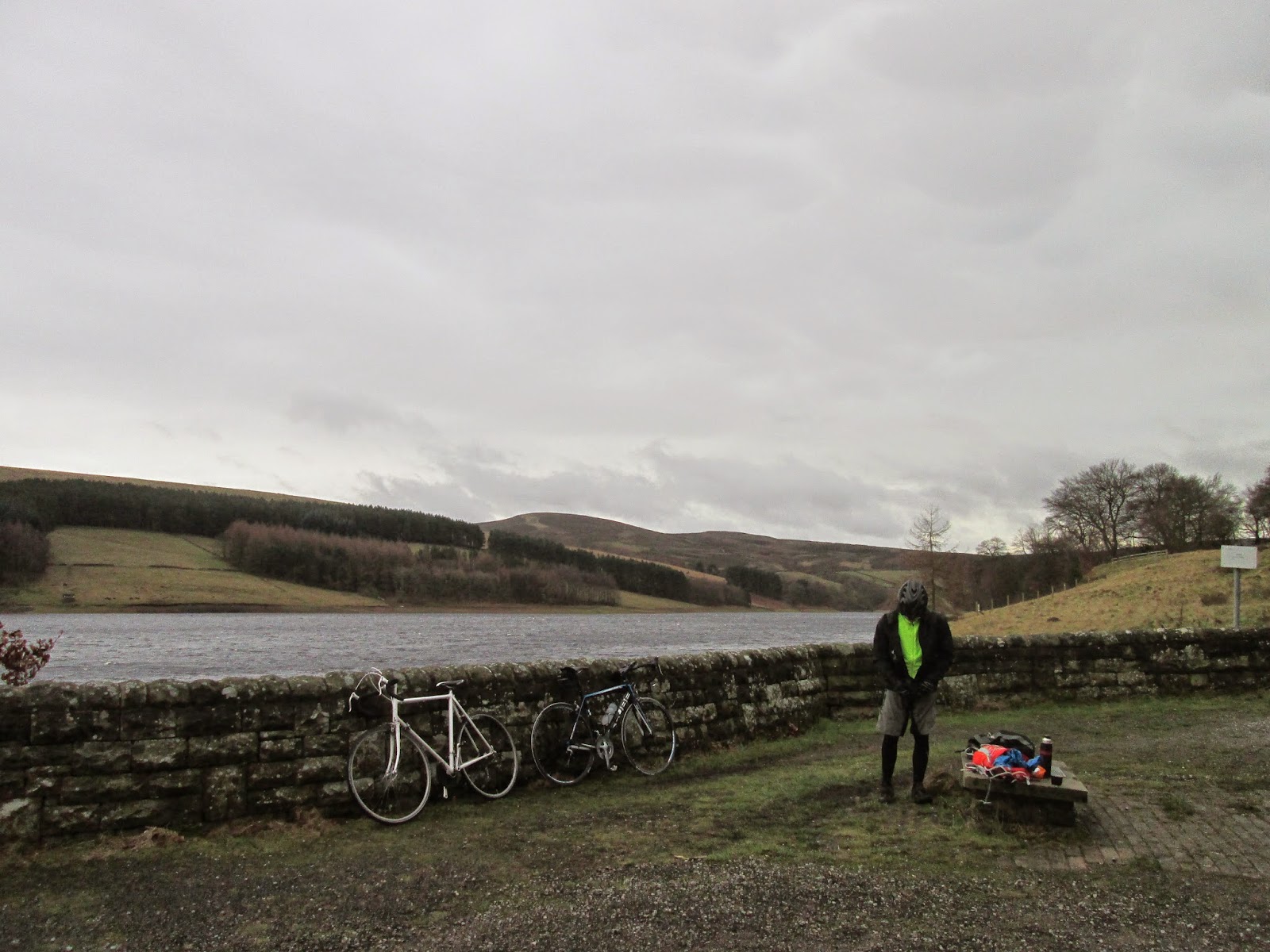 We turned right down towards Buxton then left up Old Road to Whaley Bridge. We had to resort to walking for the broken section of the track but battled valiantly with most of it before it becomes tarmac again near the Whitehall Outdoor Centre. We then had a glorious descent (mostly) into Whaley. We paused outside the town hall for a quick refreshment break before riding back to Hayfield, bypassing New Mills via Marsh Lane. 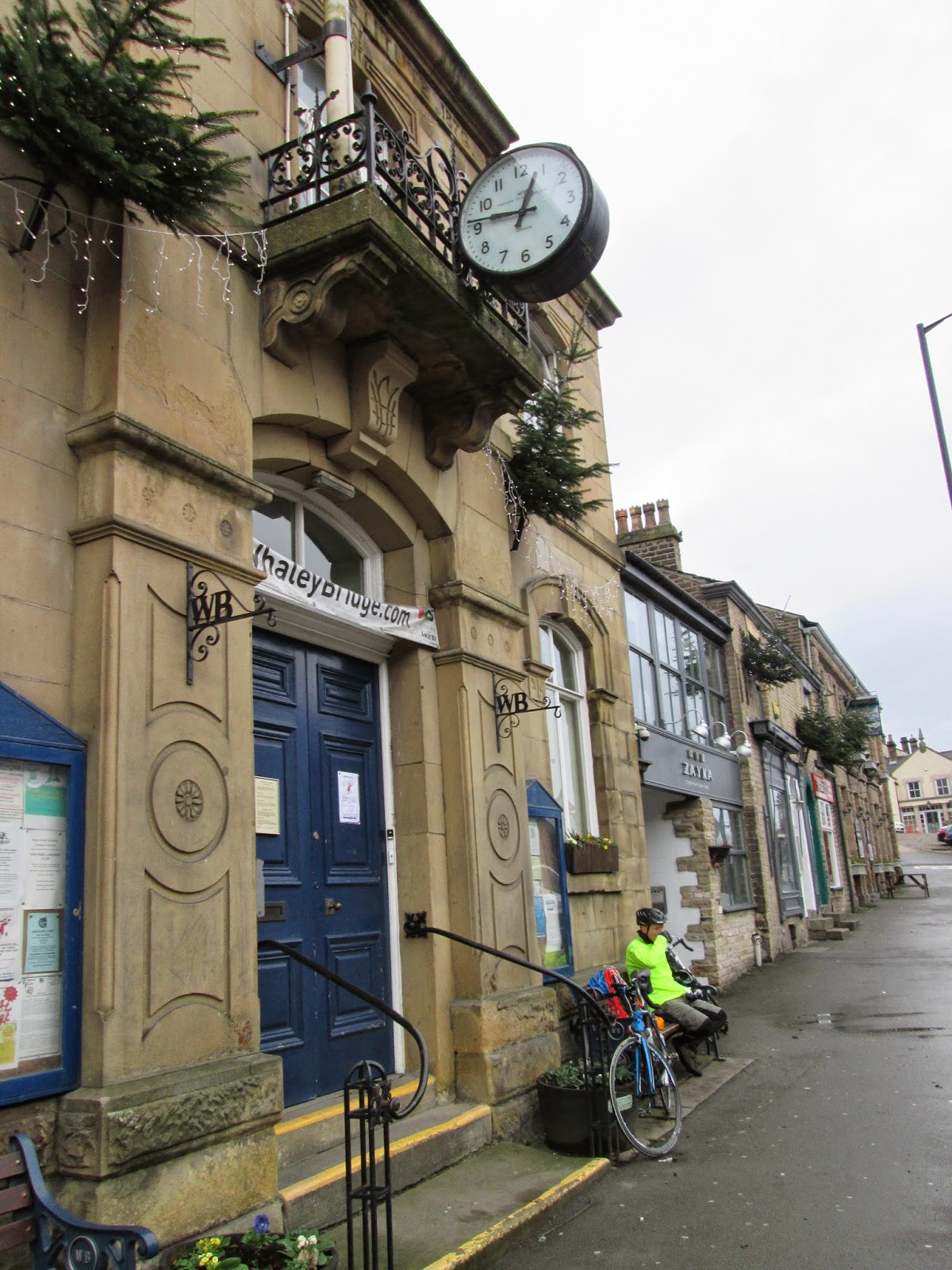 It was a tough ride, by my standards. We covered 26 miles at an average of 9.7mph, climbing 2633ft in the process. It's a route I've not done before; nor's Hamish but it was exhilarating, 'specially the descent into Whaley. The ascent from Errwood to Long Hill is hard!