Following a massive tidy up this week Chrissie and I are pleased to announce our spectacular, annual sale.

No need to ask the price madam...it's... twenty pounds! You can be the proud owner of any of these cast offs...desirable items or bundles for...you guessed it...twenty pounds! Yes £20!

Of course, that's £20 if you pick it up. At this price, if you want it posted that'll be extra, thank you. Fancy thinkin' we'd include postage...cheek! Plus, we'd need a cheque or some crisp notes posted to us first.

All of the kit is in good working condition, no repairs, ready for adventure.

So, in no particular order; 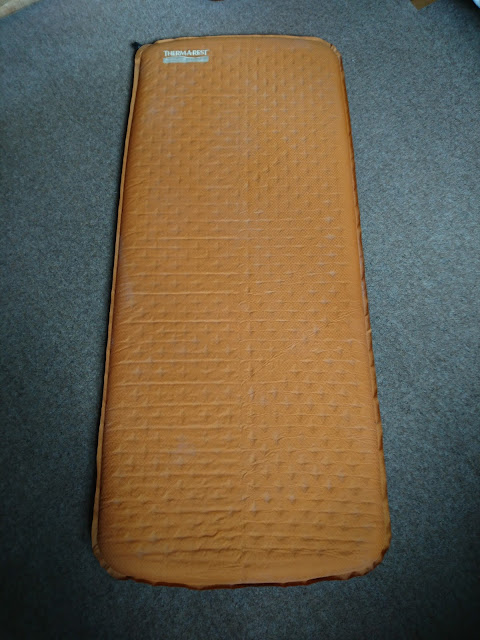 Shown folded with cap for scale (cap not included in sale). 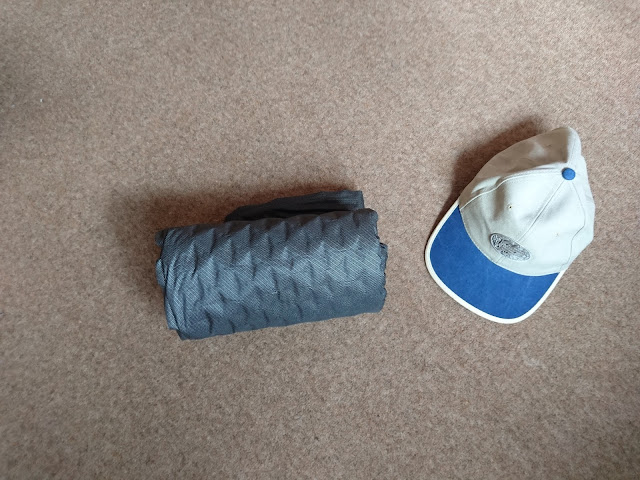 A Thermarest Neoair Small, 3/4 length. It's an original one, hardly used, similar to the X-Lite, 272g. Modernish backpacking mat at a giveaway price. With stuffsac. Be quick! NOW SOLD 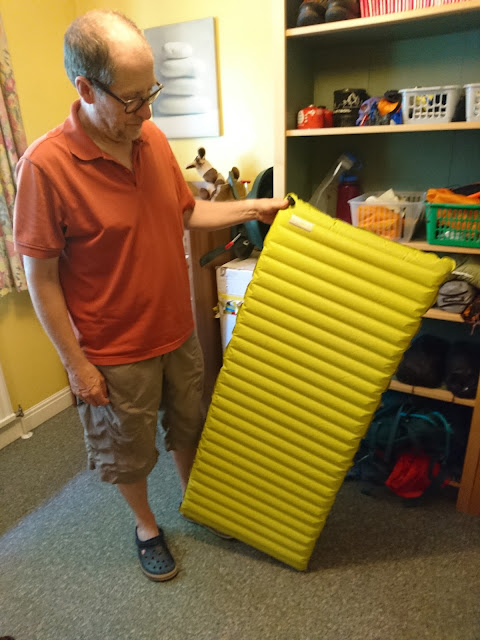 The good lookin' bloke's NOT included.

We've kept Thermarest in business over the years. They'd have folded if not for us. Here's a Thermarest Neoair All-Season mat. Medium length (168cm). Predecessor to the X-Therm. Ensure cosy, warm nights in cold conditions. With stuffsac. Hardly used, 536g. NOW SOLD 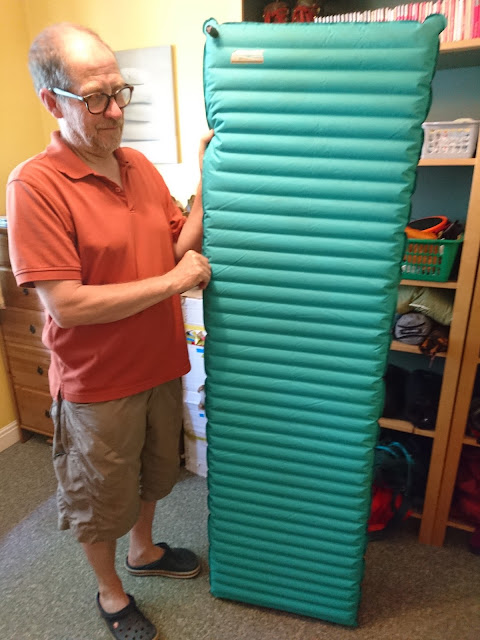 Next, a small bundle. An MSR Pocket Rocket stove in case, teamed with an MSR gas cartridge stand. The stove weighs 112g inc case. The stand's 33g. Pocket Rockets are fine, reliable stoves. We've still kept one, which we used as backup for our Jetboil Minimo in Sweden a coupla weeks back. NOW SOLD 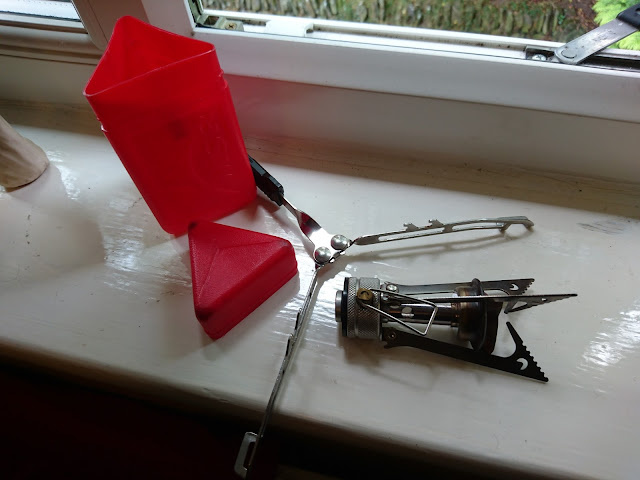 Here's another bundle. An Evernew, made for REI, titanium frying pan with folding handles, along with a very useful plastic trowel (use it for cooking or toilet duties; whatever your preference). Pan weighs 135g, trowel 69g. 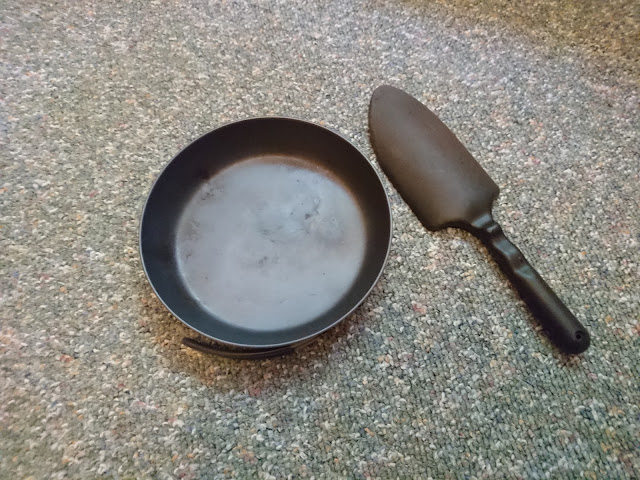 Finally, for serious cold weather use (you'd need a yak to carry it), a Corinthia 1000 down sleeping bag, with a stuff sac and compression straps. It weighs 1.7kg and is seriously cosy. Would be great in a car or camper in cold weather. NOW SOLD 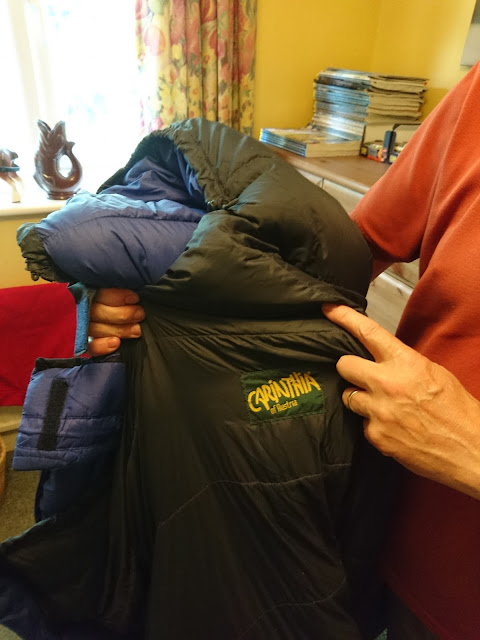 Contact us via comments on here (I'll get an email) or, probably quickest, via Twitter; @GeoffCrowther1 or @Chrissiedixie2, or find either of us on Facebook, or send a carrier pigeon to Crowther Towers, Hayfield...or a drone. Best of all, pick up from here in Hayfield, High Peak, Derbyshire, England, Europe, Earth.

Regular readers will know my thoughts on ultralight backpacking. If you don't, read here and also here. So, given my stated views, don't expect any evangelising from me on an ultralight theme. These are just my thoughts on what suits me. It may help you - it may not.

Chrissie and I are just back from a fantastic trip in Arctic Sweden (see previous post). It was the longest backpack we've ever undertaken; eight nights. Our rucsacs looked huge and felt heavy, packed at home, but, strangely, once out on the trail I was pleased at how well we both coped with such significant loads. nine days of food is a lot, regardless of our reliance on lightweight, dried meals. Chrissie carried eight days last year, but she had all her own independent camping gear. This time we shared tent and kitchen stuff so that eased things a little.

Incidentally, we never once regretted carrying all 3.5kg worth of the Terra Nova Polar Lite 3. It was just so comfortable, giving us respite from midges and rain on different occasions. We'd use it again without hesitation. 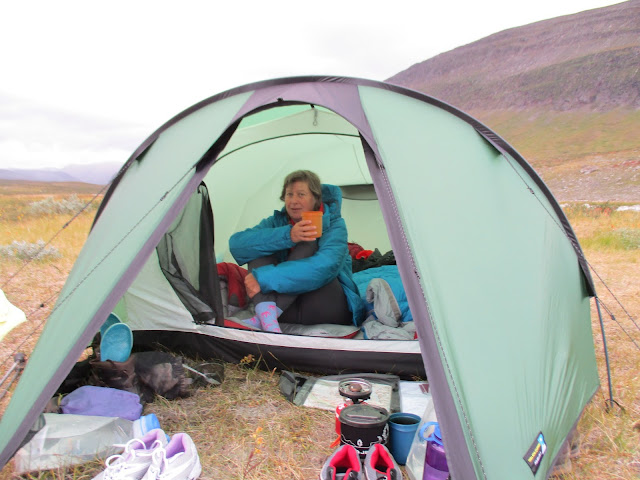 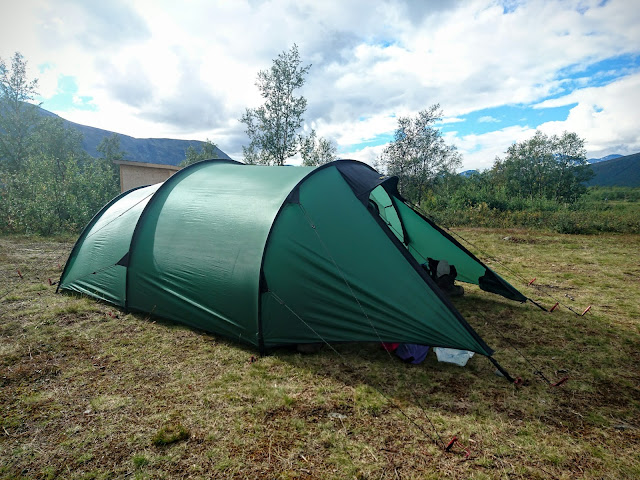 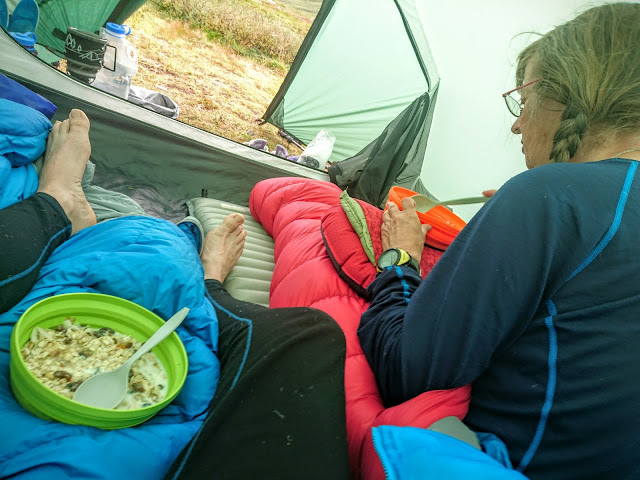 As so often happens on our journeys, conversation turned to possible further load refinements, despite our coping so well.

I was very impressed with the way my Osprey Xenith 75 swallowed everything I threw at it, including half of our three person Polar Lite 3 and a massive bag of food, all inside the sac. The tent goes inside the two rear zip pockets (which became one, once I'd removed the unnecessary divider). It managed so well Chrissie began trying to persuade me to buy a smaller sac for my, more usual, one and two night trips. Despite my grumpiness, I am open to ideas which might make backpacking less arduous. We also chatted widely about alternative clothing, which I sometimes overlook in a bid to keep costs down.

All this preamble goes some way to explain our recent spending spree, once back home.

In the past couple of weeks I've purchased the following:

Rab Dryflow 120 long underwear, to replace the Aldi merino wool ones I'd been using. Saving 84g

Thermarest Neoair Xtherm regular, a mummy shaped one, replacing my Xtherm max. I'd felt I needed the wider rectangular one, but tried Chrissie's regular while away and found it suited me AND fitted my chair kit better. Saving 96g.

Exped UL inflatable pillow, to replace the standard one I had. Saving 47g.

Osprey Kestrel 68, to use for shorter trips instead of my Xenith 75. Saving 500g.

So, that little lot has not only lightened my virtual wallet by many pounds sterling, but also my load by 790g.

I've just done a trial pack of my Kestrel and I'm amazed at how easily all the stuff I usually carry for a one nighter has gone in. A zip pocket on one side accommodated our Terra Nova Polar Lite 2 Micro with no difficulty, despite my having already packed the main body of the sac (the pocket, potentially using volume in the main body). This also means our Hilleberg Enan, a smaller, single person, shelter, will go in easily. 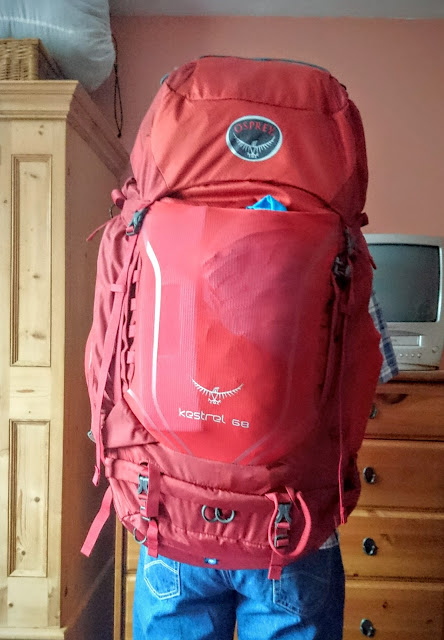 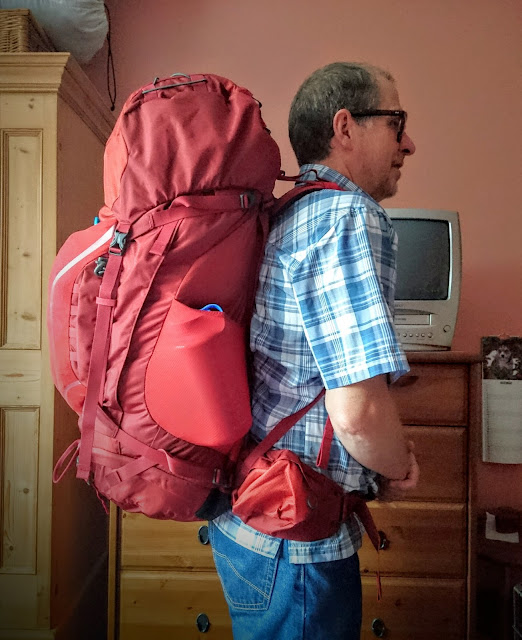 As you can see from the photos, it's far from fully loaded. There's plenty of space left under that floating lid.

We're in limbo at the moment. We're waiting for some dog-proof, washable covers to be made for the seat bases in our van and a couple of warranty issues to be sorted. I have a dental check up on 16th September and Chrissie's waiting for the opening date for next year's TGO Challenge. Once all these boxes are ticked we'll be off in the van. We're planning a trip across the north of England, taking in the North York Moors, the Dales and the Lakes. Buoyed with enthusiasm after our Arctic jaunt we're gonna try some short backpacks with Pebbles and Islay. We've never camped with two dogs before. Watch this space. Ample opportunity to try out my new rucsac.

Regular visitors will know I've been on a  self-imposed, wild camp every month challenge, started last October. Well, I've failed. I didn't camp in July. Too much seemed to be going on. We were waiting for the new van and faffing with all sorts around the house prior to its arrival. I suppose I could argue I more than made up for it in August. But I failed in the easiest month of the year, smack in the middle of summer. What the heck? I'm quite content that, for the first time in my life, I wild camped right through the winter months, including a very cold trip over the Yorkshire Three Peaks. I'm planning to carry on from here though. Hoping to make wild camping a normal monthly (at least) routine.

Yesterday we booked flights to Lulea in northern Sweden for next August. We've been bitten by the Arctic bug. We're off to Sarek National Park; venue for Chrissie's trip with James in 2015. A different route though. Bring it on! 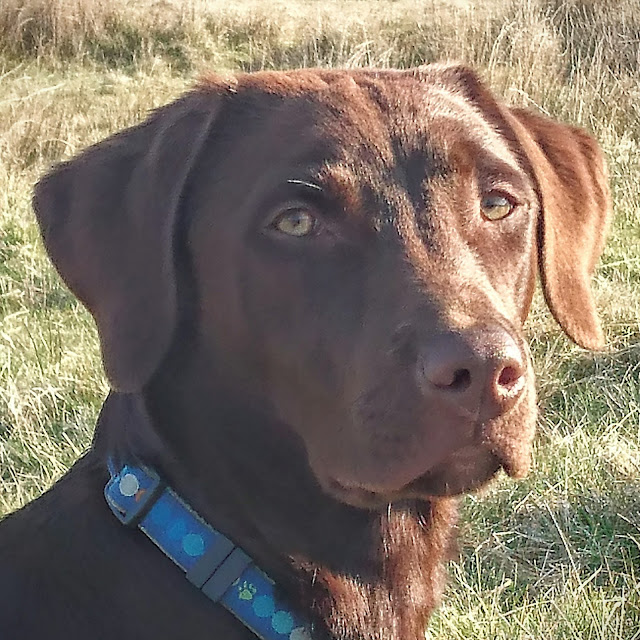 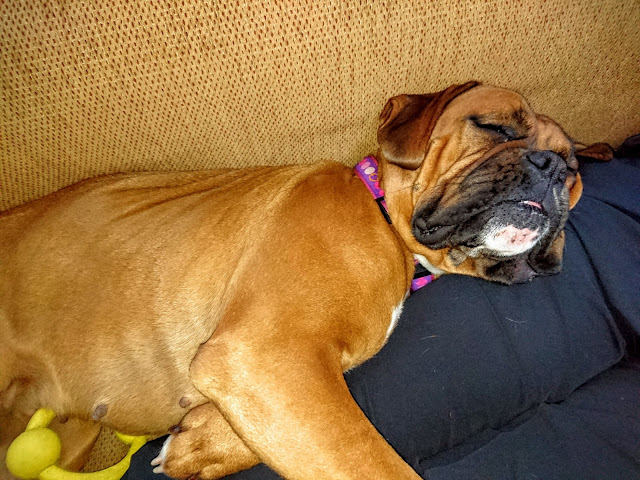