NOW SOLD!
We have a tent for sale. It has a bit of a back story.
We bought a Southern Cross 2 a few years ago, as a replacement for a previous Terra Nova model which was no longer available. It had been out for a year or so and won at least one award for its innovative design. It's fairly unusual in that it has two crossed poles, the transverse one in a sleeve and the other, supporting the tent with hooks. It has two doors and two porches, so great for keeping wet kit out of the way. It's a good, strong, two person, four season tent which we used in all conditions, including heavy snow, with no problems. We've mostly used it, backpacking, as a one person plus dog tent, but I've found it great for cycle touring, giving plenty of room to bring all my bike luggage inside the inner.
Back in 2018, prior to my 5 week cycle tour across France, I had an accident with a very powerful torch, which I'd been sent for review, burning a hole in the groundsheet. I won't go into details, other than to say that the torch manufacturer  agreed to replace the tent for us at no cost. Before that happened I repaired the hole and took it with me on my French adventure, using it for over 30 consecutive nights without a hitch.
We bought the replacement when I returned, in July 2018. This new tent is the one for sale. It hasn't actually had a lot of use, partly because, in 2019, Chrissie and I had a long journey through Scandinavia, where we used our bigger, 3 person, Terra Nova tent. I hardly need to mention how little we did in 2020! I did use it for a week long cycle tour of the Caledonia Way in the spring of 2019, in rotten weather, without a problem.
These pics are from my Caledonia Way cycle tour. The Southern Cross is the larger, paler tent. 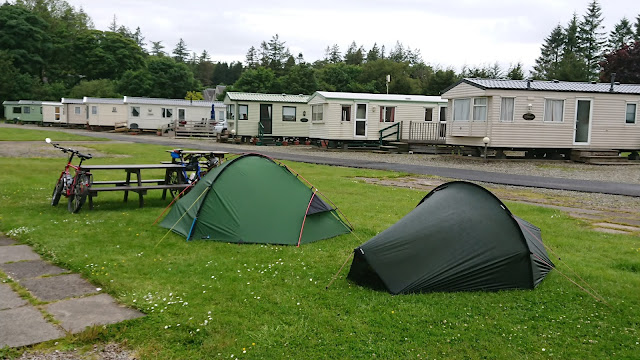 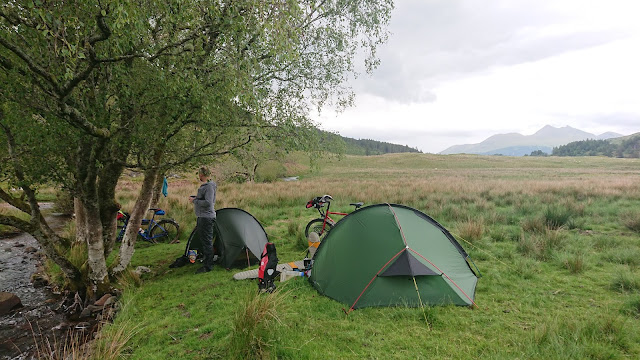 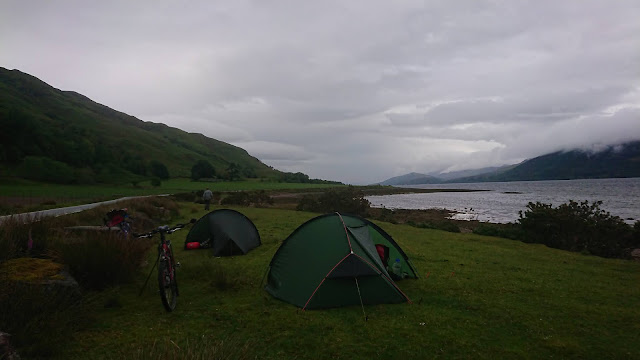 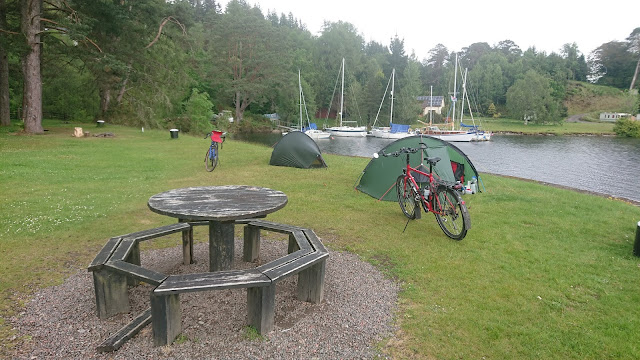 However, Chrissie did use it one night last November, pre lockdown. It rained very heavily, with 40mph wind gusts, and the tent flysheet leaked from the transverse pole sleeve, so much so that Chrissie decamped and came home (she was very local, thankfully). We contacted Terra Nova about the problem. They asked us to send the flysheet to them and, having checked it, they re-taped it all, free of charge. We have the "receipt" for this, which can go with the tent, to the purchaser.
As I write, Chrissie slept in the tent last night, in our garden, in snow, and for added certainty we've just given it a hammering with our hose pipe, focusing on the seams, to make sure it is indeed watertight. It is.
Over the past 12 months we've been swapping our tent collection to Hillebergs, including buying two, two person tents, an Anjan 2 and a Nallo 2, which is the only reason we're selling the Southern Cross 2. We also have a Southern Cross 1, for solo use, such is our confidence with these tents.
So, in short, it's a lightly used, good quality tent and we're asking £450 for it, including postage and packing. If you go on the Terra Nova website, you'll see that their rrp is £700, and they're also not expecting any more in until late February/early March. There's been a real demand for decent backpacking tents recently, so you'd be struggling to find a new Southern Cross 2, for sale anywhere. This is also true of Hillebergs incidentally.
Please don't  insult us with a silly offer. We're happy to keep the tent as a spare if it doesn't sell. You can never have too many tents.
Contact us via Twitter at either @GeoffCrowther1 or @chrissiepebbles. Chrissie is on Facebook at Chrissie Todd Crowther, as well.
If you're not in the market for this tent, we'd be grateful for any shares of this advertisement.
Cheers all!
Posted by Geoff Crowther at 14:34 No comments: