David and I had been planning to backpack together for a while. Never quite got aroundtuit. Finally, on a dismal Tuesday morning in February, he arrives at Crowther Towers. It's been snowing heavily but now it's turned to rain. Yeuk!

We lunch and natter, noisily, then, unable to put it off much longer, we shoulder heavy rucsacs (well, I do anyway. David's rucsac being made of gossamer and filled with, seemingly, negative gravity lightweight fripperies) and plod (me, David's skipping - like a gazelle) up t'road. The rain has stopped. The Gods must like at least one of us.

Islay's here too, proudly bearing her Ruffwear Palisade panniers, tail wagging furiously, filled with excitement, rather than breakfast, which she earlier regurgitated all over the lounge carpet in her excited silliness. David's left Moss, his handsome collie, at home. David doesn't like getting Moss dirty...or his tent dirty...or himself dirty...or maybe I got that wrong. Anyway, Moss ain't here. Islay is disappointed, but not enough to stop her excitement.

We're not going far, so choose a winding, scenic route up over Middle Moor, via White Brow, into the bottom of William Clough. 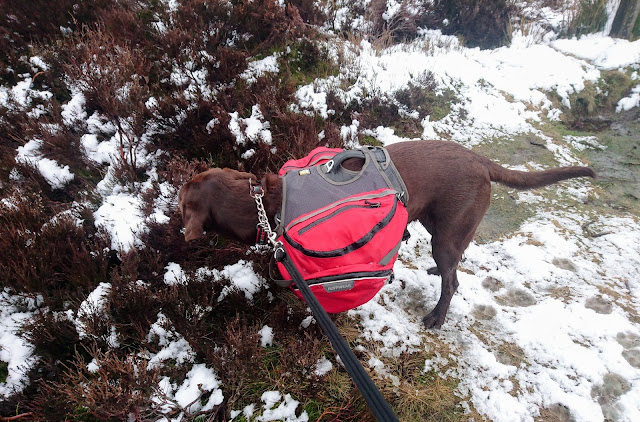 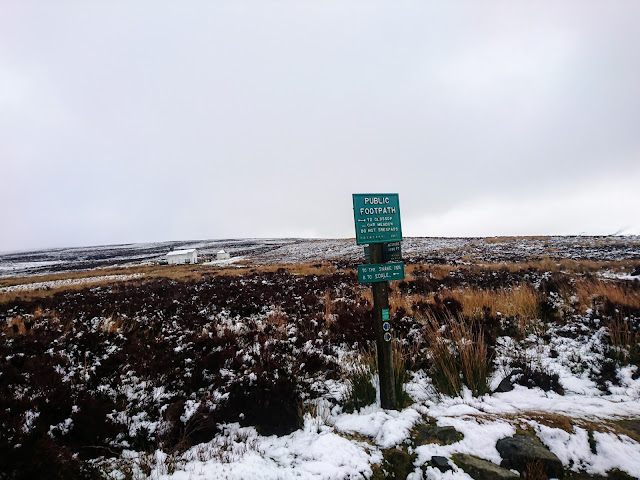 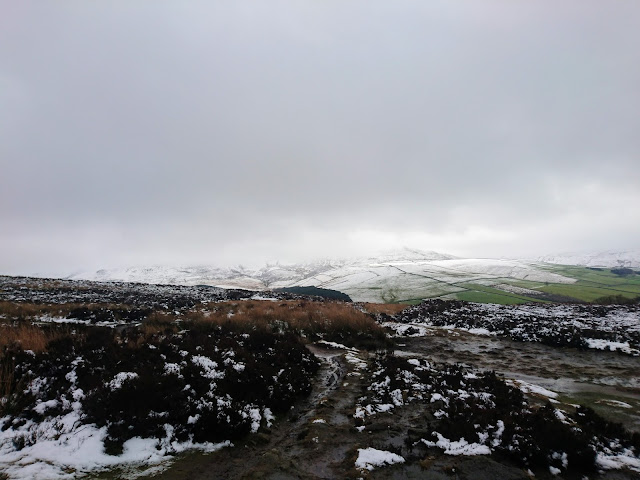 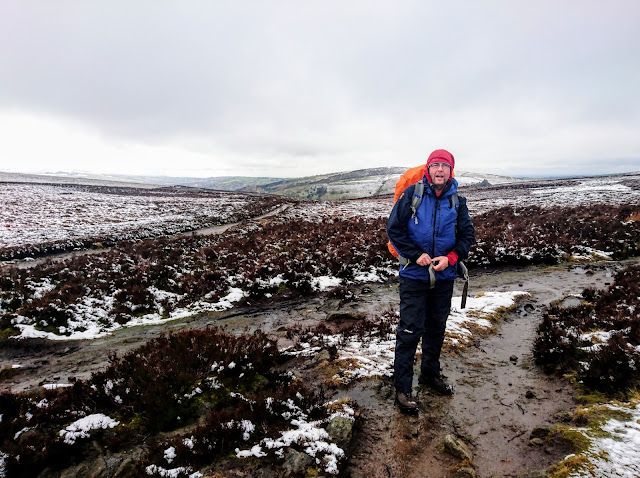 David looks slightly bemused there. I think he is worried his lighter-than-air-sac might be wafted away by a passing whisper of wind.

Anyroadup. We follow the path uphill from here, stopping along the way to gaze in awe at the snowy landscape then head up...again...to find a suitable place to camp.

Up goes our new Terra Nova Southern Cross 2...in seconds...well, minutes anyway. Then me and choccy paws wander back to a pool to filter some of its watery depths...only a couple of litres...barely an armful. My phone plays a merry tune. It's David. He's had a mishap with his specs. I soothe his fraying nerves and offer the facilities of Crowther's Travelling Optical Repairs in the fullness of time. And me an' choccy paws slip and slide back to our abode and settle. She in the cosy confines of her Noble Camper. Me in the downy loveliness of my Rab Expedition ('sounds good dunnit?) 800. 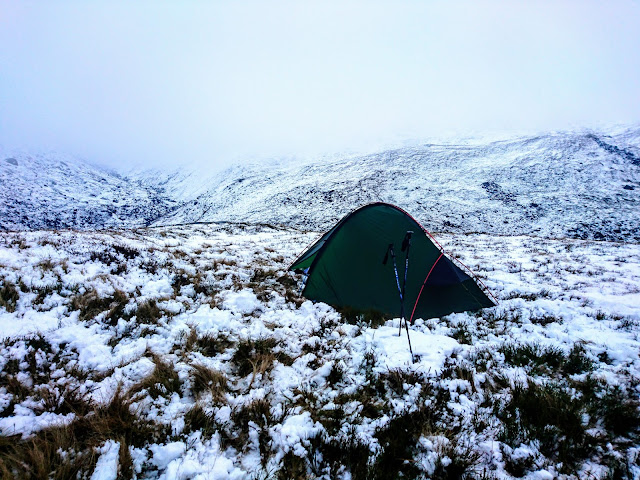 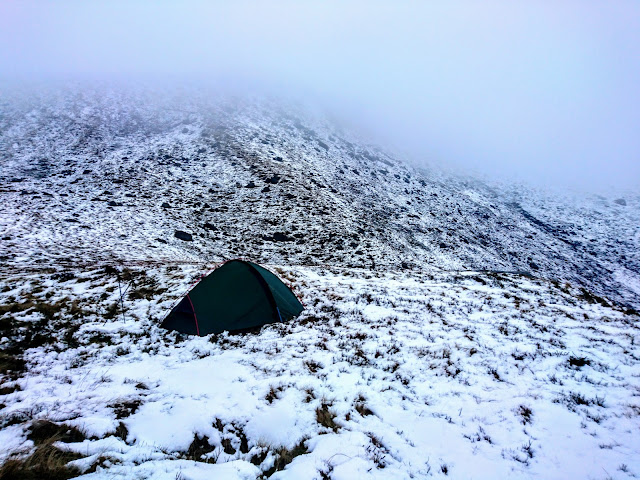 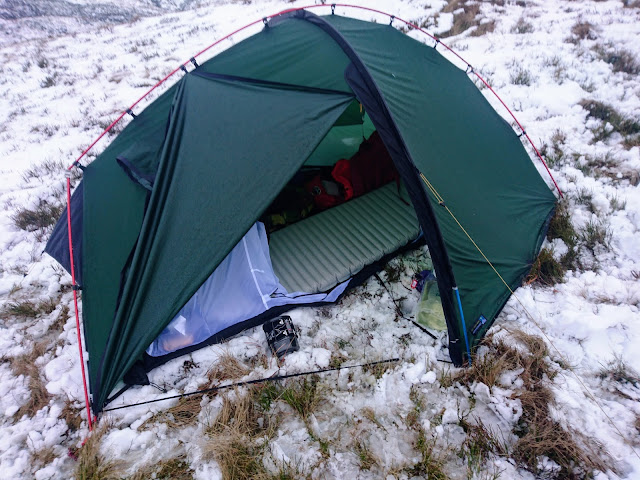 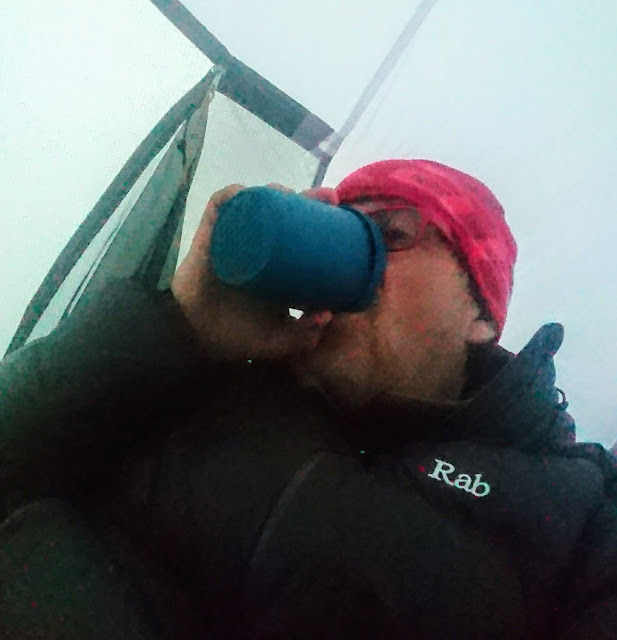 David erects his super, duper Z Packs Duplex, tenty thing. It's made from cuben fibre J cloths. Very swish and SOOOOO light. I hear the wind whispering in my ear. 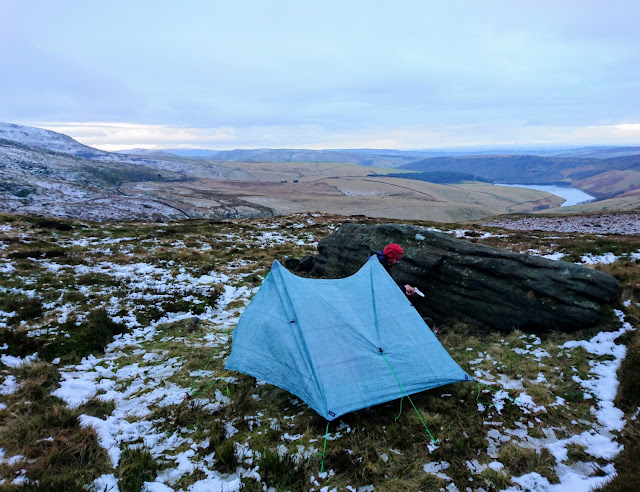 Cool nights like this do not make for sociability. I'm far too warm to want to share amusing banter with David and I suspect he feels the same.

I cook up a Norwegian, Real Turmat beef stew which the kind people at Base Camp Food donated for me to try. It is truly delicious, with large meaty chunks of beef accompanied by rice and other yummy ingredients. The stuff's a little pricey but worth considering for the odd taste of luxury.

I pass the rest of the evening listening to Radio 4 and browsing Twitter and Facebook. When Chrissie and I were last up here there was no phone signal. Now there's 4G. Amazering!

Islay dines, in her bed. 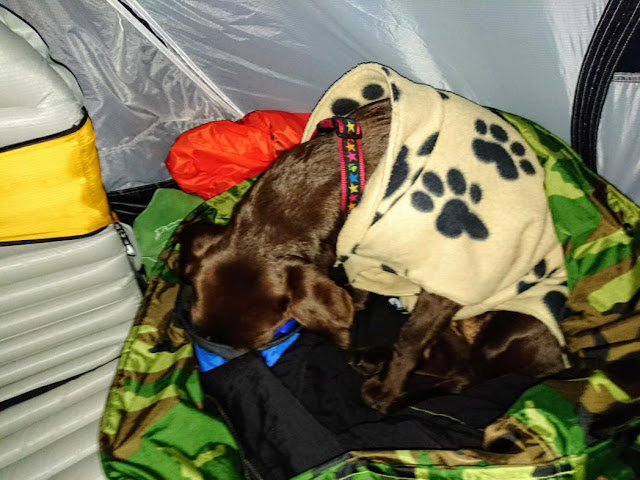 I try looking moody, for a photo. It doesn't work. 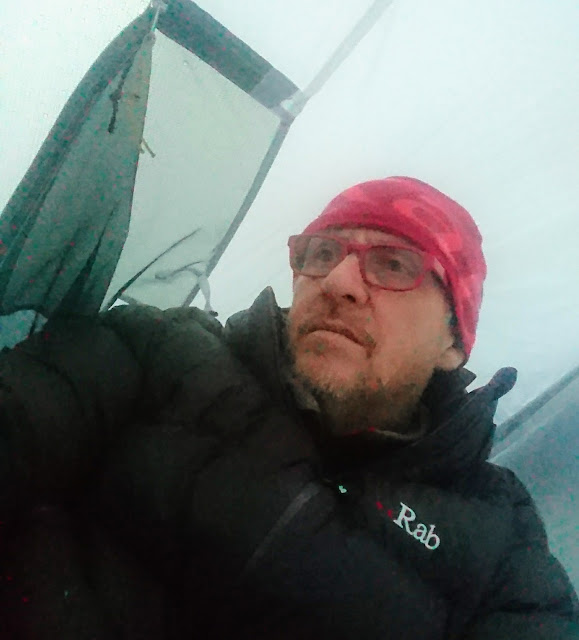 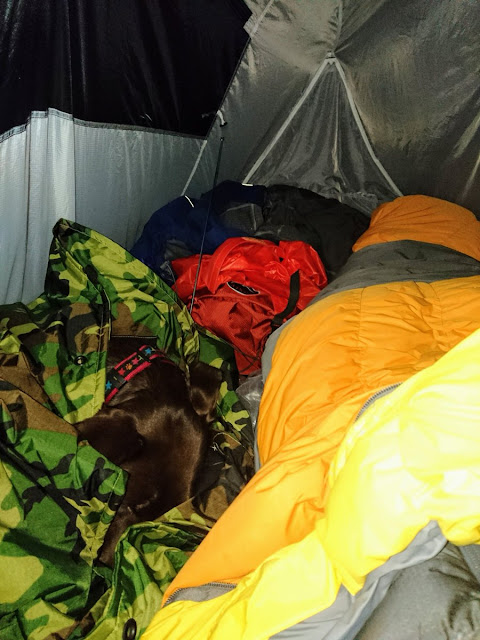 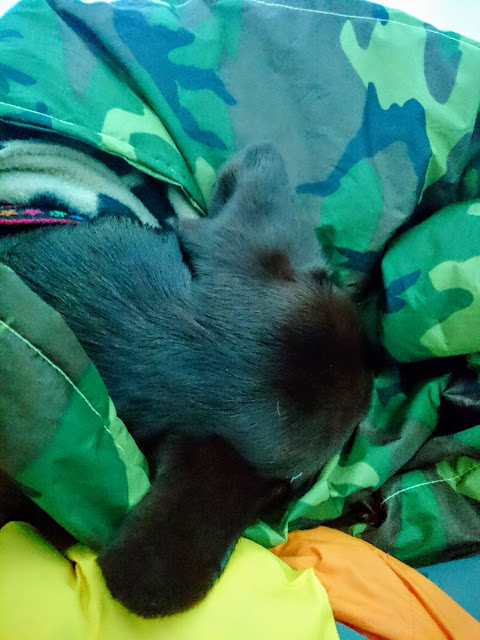 In t'morning some of the snow's gone. Me and the pup guzzle brekky. 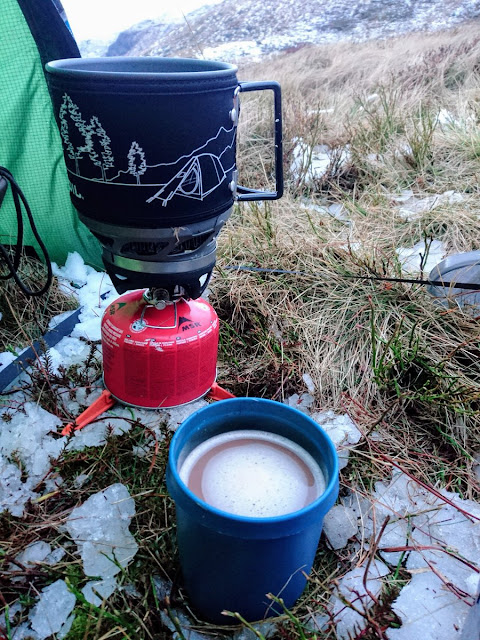 We take a post breakfast toilety-type wander before packing up. 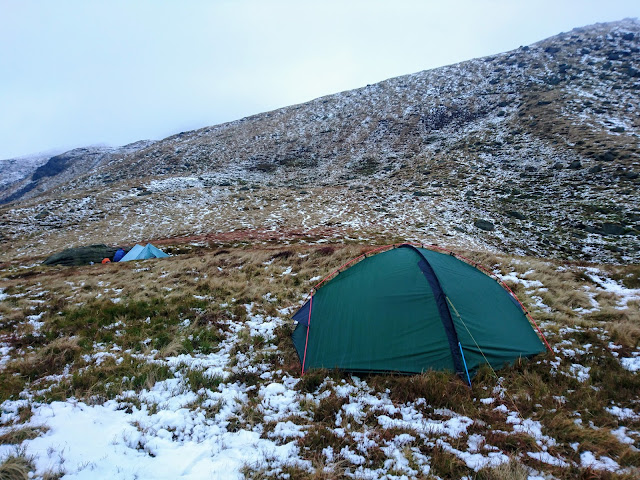 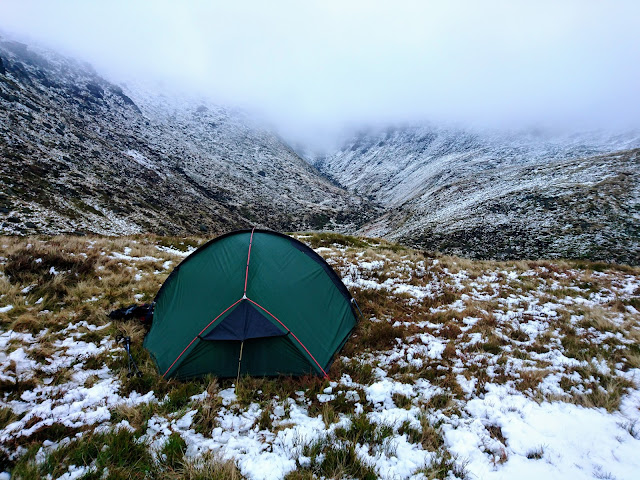 Then, with loins girded with gossamer (David) and "oof that's heavy" (me) we do the unthinkable and strike straight up the steep, pathless hillside to meet Kinder's edge path.

There's more snow up at these dizzy heights, but the visibility is almost invisible. There's no view of the Downfall so we trudge on towards Red Brook and Kinder Low. 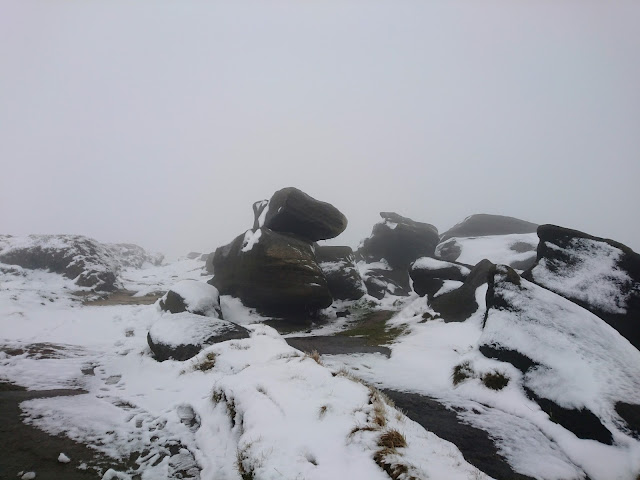 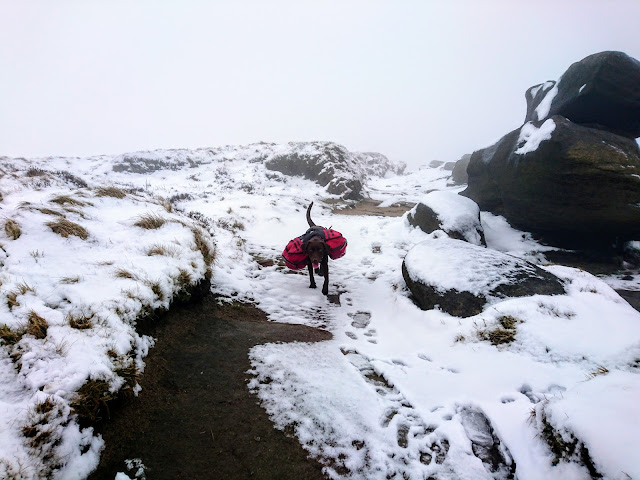 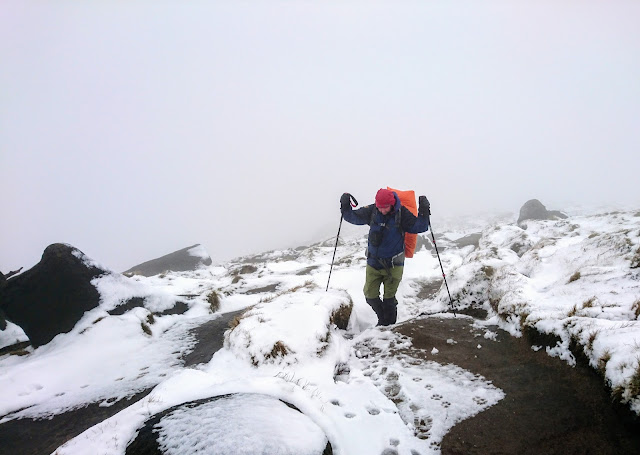 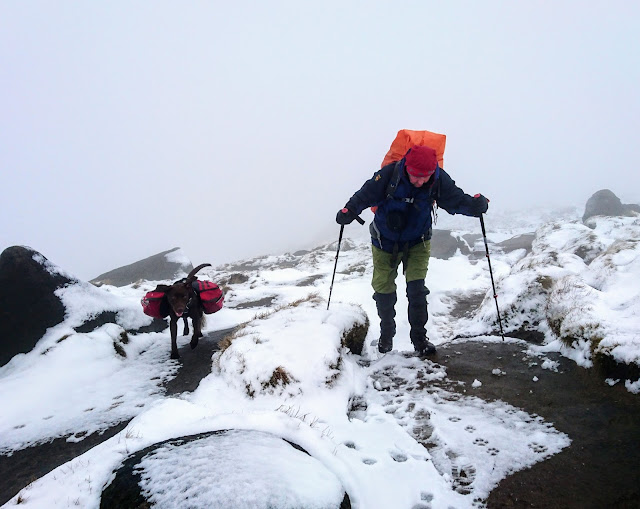 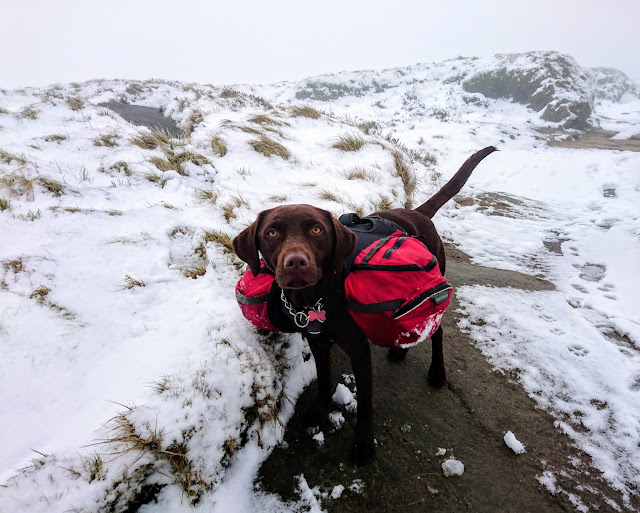 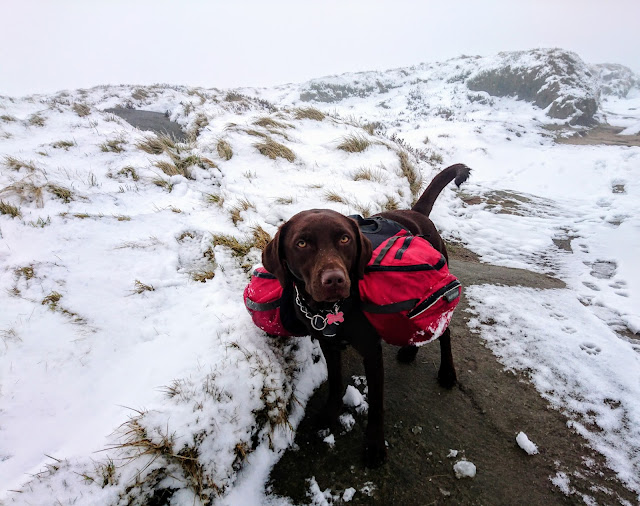 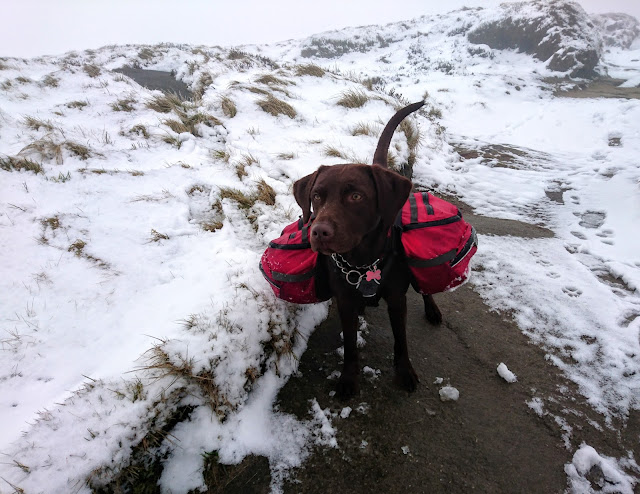 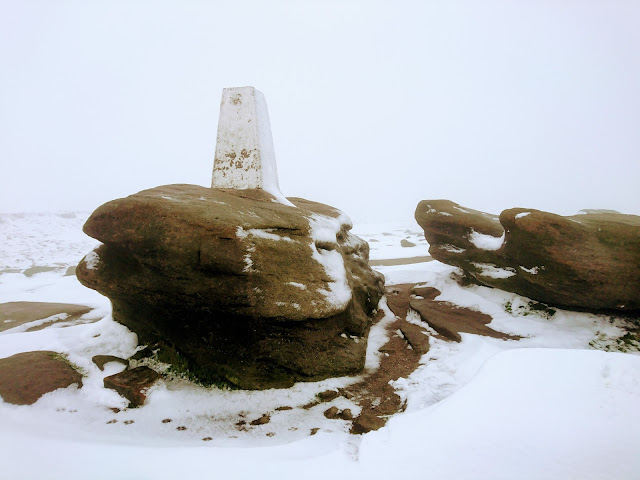 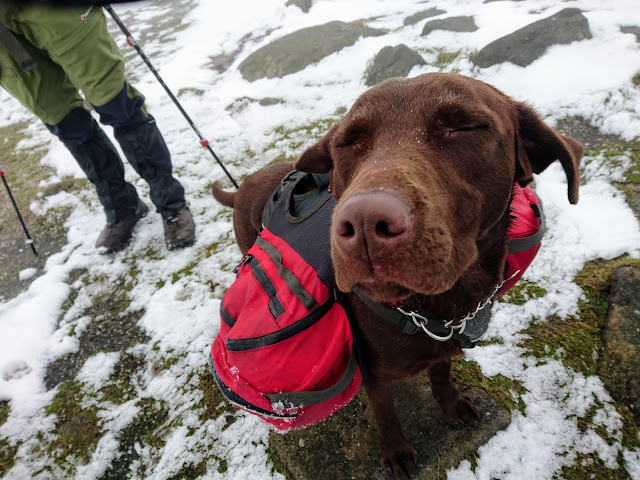 Leaving the trig (neither of us wanted to carry it) we pootle on down past Swine's Back to Edale Cross (it wasn't) to stop for a short break.

Then, following in the footsteps of those, in times of old, plying their trades twixt Edale and Hayfield we return to Crowther Towers, bacon butties, coffee...an' cake with carrots in it.

So, after a second night in the Southern Cross 2, I'm warming to it. There's plenty of room for one plus a pooch to spread out, with my rucsac inside the inner. The double doors and porches are just great. The porch not being used as an entrance makes a great mucky-gear store. The ample headroom allows use of the chair kit... so comfy. It's very quick and easy to erect. The clip holding the open door back onto the exoskeleton means no drippy, flappy fabric showering you with condensation. And on this cool, almost windless night, with the vents at each end of the inner open, I had no condensation whatsoever in the inner. I may come to like this tent. Still not used in any proper wind though. It'll definitely go with me an' Islay on the Sutherland Trail in April/May. Watch this space.

What fun...and I'm indebted to David for being such good company (honest) and being the butt of my acerbic wit.