Davy's on the road again...

The phone's ringing. It's David.

"Geoff! Will you hold my hand while we go an a 'ickle cycle tour...please?"

"Have you still got those stabilisers on?"

"Oh, thank you Geoff...you're so wonderful."

So, grudgingly, I pack the panniers and my beautiful Thorn into the Scooby and set off, in much haste, for Fellbound Towers, in deepest darkest Welshland.

On arrival, David attempts to placate my grumpiness by feeding me all kinds of epicurean delights. He fails miserably, and I take to my bed in deep dudgeon.

The next day dawns bright and chilly. David is bouncing about in excitement like a feckin' labrador puppy. Humph! What is he on?

As I load and fettle my beautiful Thorn, David wheels his velocipede from the motor shed. It seems he's totally ignored all my valuable advice and, instead of buying a beautiful Thorn (like mine), he has acquired some strange device from across the pond, which he seems to think constitutes a touring bicycle. Pah! I refuse to acknowledge it.

This is what a PROPER touring bicycle looks like... 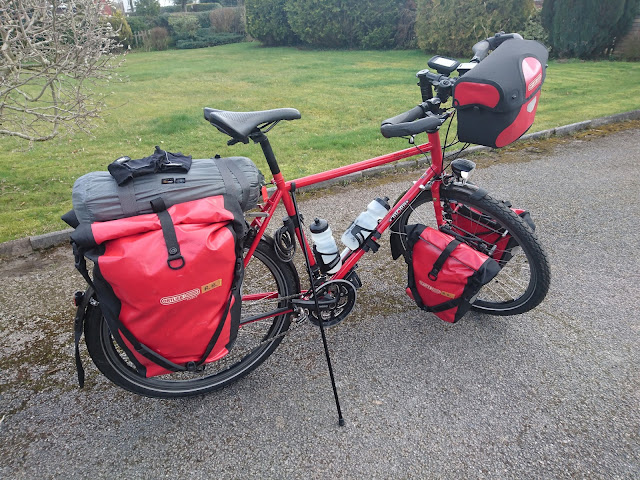 ...whilst here is David's attempt. He seems to think it's clever to stand on a really-steep-slope trying to prevent his "bicycle" from escaping his clutches. And, don't get me started on his outfit... 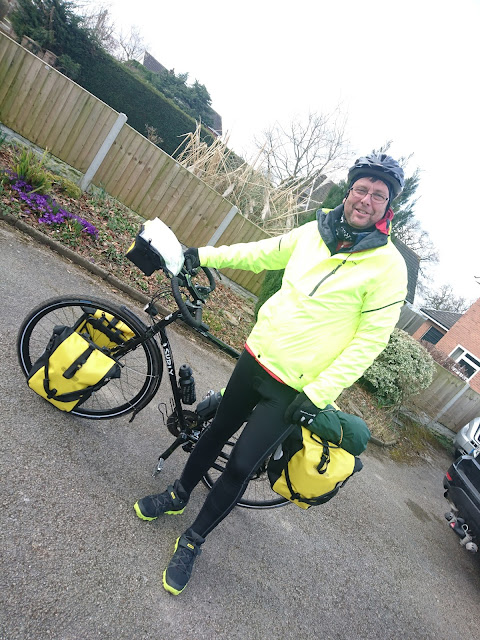 So, after an inordinate amount of faffing, off we go, pootling through the lanes of Welshland, broadly in the direction of Cheshire. David pretends he knows where he's going. I, meanwhile, follow at a decent distance...so as not to appear to be associated with the wildly wobbling David on his inappropriate, Stateside thingy.

We just about manage as far as a cafe in a Cheshireish village, where we refuel on stickiness and coffee. A member of the local constabulary notices us and checks with me (the competent looking one) if David has passed his Cycling Proficiency Test. I affect a tone of ignorance and turn the other way...while David blusters.

We continue through rural panoramas, passing villages like Beeston, Brumpton and Bumthicket. Up hill and down dale we progress with a modicum of dignity...well I do anyway.

In the fullness of time we arrive at the Camping & Caravanning Club site at Delamere Forest where the staff great us fulsomely and direct us to the camping field. My tent is up in seconds. David, on the other hand, having a massive stable of new tents, spends ages faffing and fiddling with something called a Hillyberg Rogan Josh, the latest in a long line of new-tents-which-he's not-put-up-before which, once erected, is big enough to stable a carriage and four.

Here, David feigns confidence, before touring the campsite offering the other campers a tour of his massive shelter. I just hide. 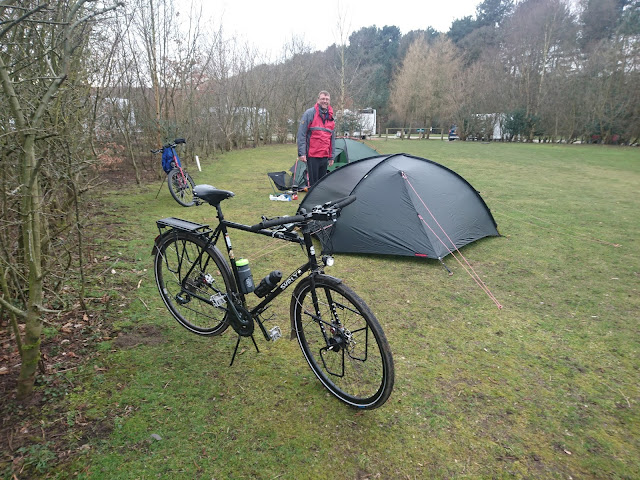 Having worn himself to a frazzle with guided tours and the production of cream teas for all, David finally settles in his palace...complete with throne. 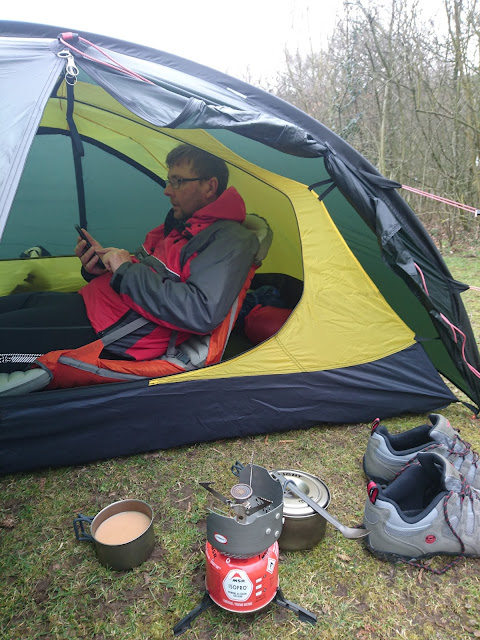 Thankful for the peace, I gaze heavenward and engross myself in the production of a meagre repast. David, meanwhile, awaits the arrival of his staff, with guinea fowl or some such gruesome "delicacy".
Did I forget to mention his staff had been following, at a stately pace, in David's motorised caravan? Perhaps I shouldn't mention it...I won't.

Morn arrives, and I receive a rude awakening as David's staff prepare kedgeree, rattling the copper-bottomed pans on the portable range. Honestly! I ask you! I breakfast on gruel, as usual.

Eventually we finish decamping and David, once again, produces a strange bit of paper, which he describes as "a map" and pretends to understand it as he wobbles out of the site onto the road. I follow at a safe distance and we cycle at a stately rate, along the byways back through Cheshire. 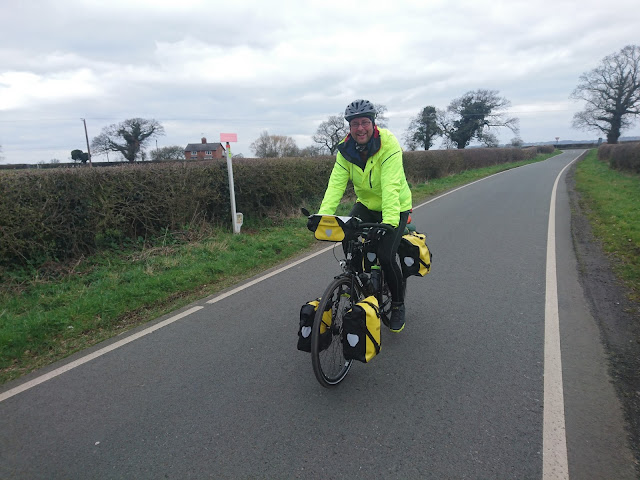 David begins to show the beginnings of getting-the-hang-of-things as he even manages to stop, get off the "bicycle" and back on again, without the whole kit and caboodle crashing to the floor. I'm almost impressed until, the inevitable happens, and we get lost.

David pores over "a map". I look on, in disdain. 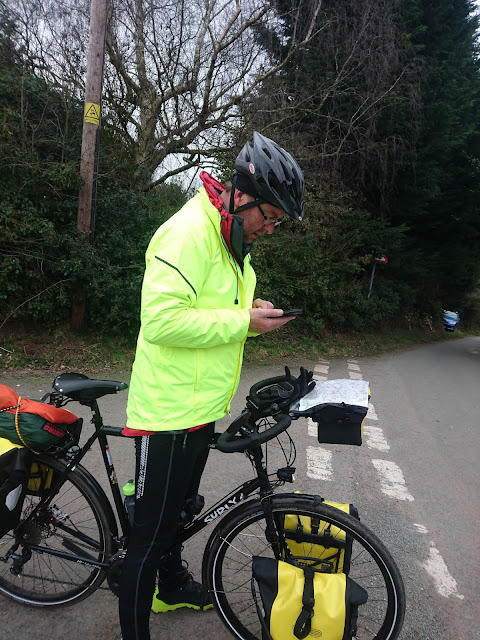 In exasperation, I decide to turn around and leave the silly man to his own devices... 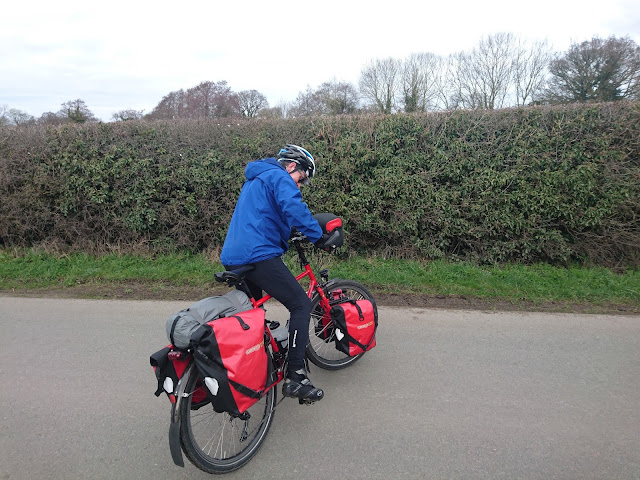 ...but he pleads with me, in floods of tears so, ever the altruist, I stoically stay...and wait...until he sorts-himself-out.

We carry on down the byways until, eventually, we find a cafe where I console myself with cake and coffee while David regales the rest of the customers with tales of his prowess as an "Adventure Cycle Tourer". I do my best to hide.

We leave for the final stretch back to Fellbound Towers and I do my utmost to maintain decorum as I tackle the final few miles (or killymetres, as David insists on calling them). 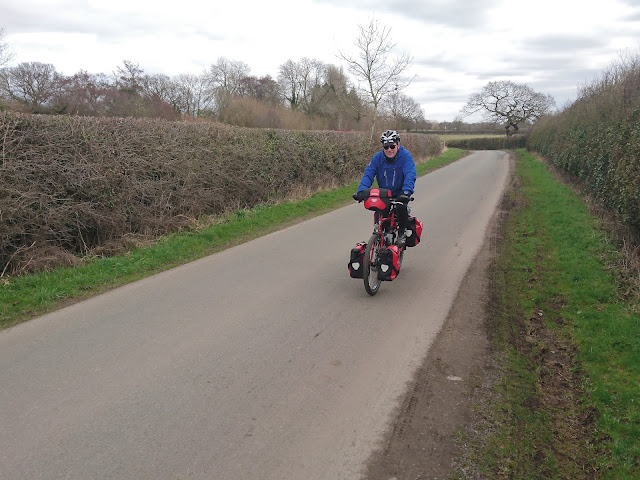 And so we arrive, as I mutter under my breath. Once again, David attempts to calm my nerves with the local application of bacon and sausages, but fails miserably as I hurriedly throw my beautiful Thorn unceremoniously into the Scooby and roar away...into the distance...back to normality.

(Much of, if not all, the above is a shameless fabrication. I love you David...and I just MAY have been knackered trying to keep up with you.)