In July 2016 we swapped our Warwick Duo for a new Bailey Approach Autograph 745. 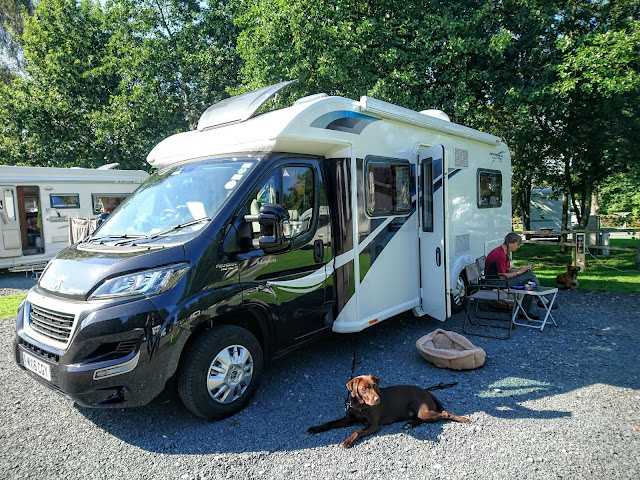 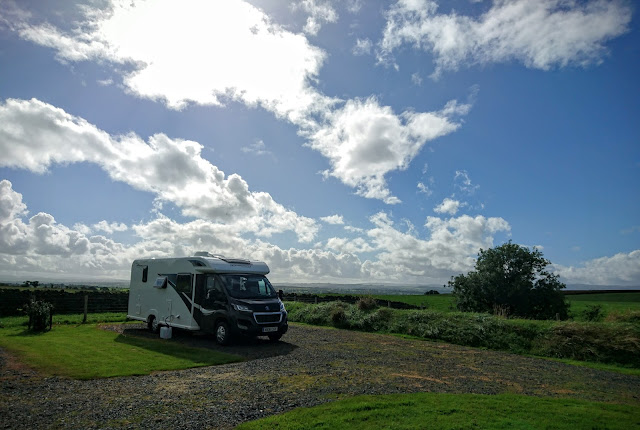 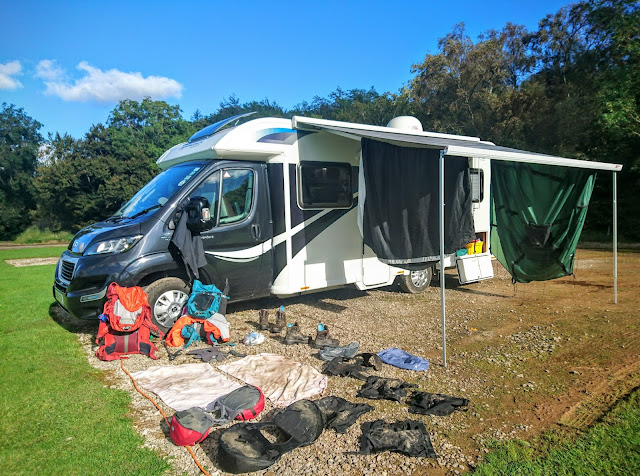 As you can see, it's wholly different from our previous van, being a coachbuilt rather than a van conversion. For those not-in-the-know a van conversion is built within the body of a standard van body (like our Warwick Duo) whereas a coachbuilt has a "coachbuilt" purpose-made habitation body grafted onto the back of van cab unit. This one has a German designed (but built in the UK) Alko galvanised chassis attached to the Peugeot Boxer cab. By arrangement with Alko, Peugeot build the cabs with dedicated attachment points for the chassis and they are delivered to Alko with two cabs attached back-to-back, allowing four wheels and easier transportation. Alko fit the chassis, rear wheels, suspension, brakes and exhaust then ship the rolling unit off to, in this case, Bailey's in Bristol. Bailey's have been building caravans for decades (we had one briefly), only entering the motorhome market around five years ago. They know a bit about habitation systems and their method of construction (so-called AluTech) is second to none. I reckon the way it's bolted together gives most protection against water ingress; the scourge of coachbuilts. They used to have wood framing, which was susceptible to rot if damp got in. The Bailey has no wood in the body, save for the floor, which itself is encased in a smooth, plastic skin.

It's substantially bigger than the Warwick. At 7.45m long it's about a metre longer than the Warwick, if I include the luggage backbox we always had on there. The length doesn't really affect the driving experience but you do have to be careful with the overhang behind the rear wheels. When turning, the tail swings out on the opposite side. So, for example, parking right next to a lamppost could see you clouting it with the back nearside as you pull out to the right to clear a vehicle parked in front. Fortunately the huge mirrors give a clear view of what's happening down each side. The biggest issue is the fact that the van's around 25cm wider than the Warwick, cos the habitation unit sticks out each side, behind the cab. Also, the mirrors are on extended arms. The overall width is 2.77m, reducing to 2.41m if you fold the mirrors in. None of this is a problem on a normal width, two lane road. Nor is it an issue on single track roads. They're almost always wide enough for the biggest of vehicles - dustbin wagons, fire engines, HGVs and the like. The worst roads are the narrower, two lane ones, commonly encountered in the Dales and the Lakes. You have to be careful. Charging into blind bends is a no-no. It's important to consider what might be approaching out of sight. Most drivers of bigger vehicles are considerate and slowing down often deals with the encounter. Driving carefully (I like to think I do this all the time, no matter what the vehicle) is key.

So much for the downside. What about the benefits of driving such a huge lump of a thing. Well...SPACE, pretty much sums it up. We have a comfy lounge which can seat up to six or seven folk, a separate, roomy kitchen, a washroom with a separate shower cubicle and...a permanent double bed! Making up the bed each night had become a real bugbear for me so this was a must in our upgrade. Plus, the lounge includes two, forward facing, belted passenger seats something we felt was significantly lacking in the Warwick. This means we can transport up to four people. Also, a double bed can be made up in the lounge, making this a proper four berth van (many on the market have four beds but only two passenger seats!). As you can see, the dogs think it's JUST big enough. 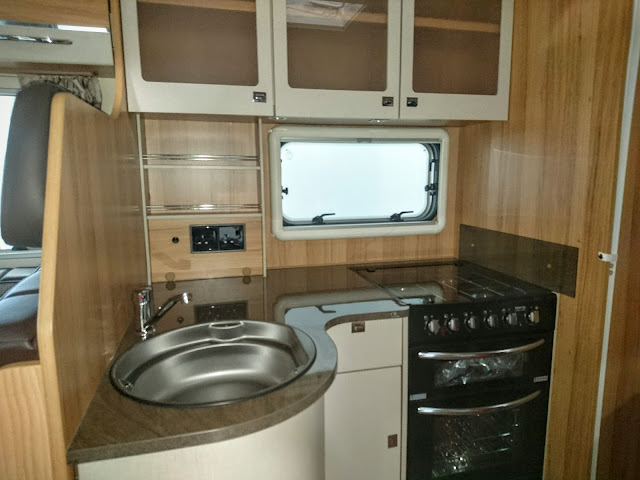 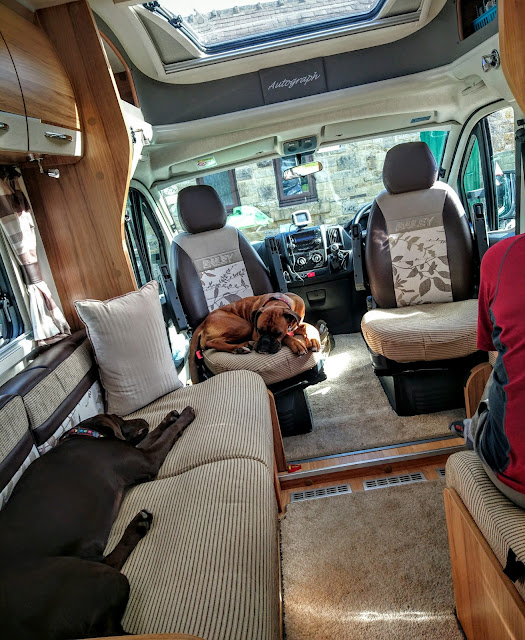 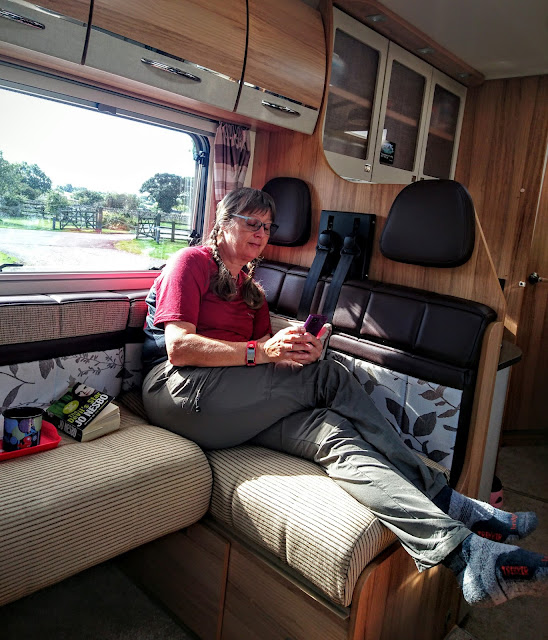 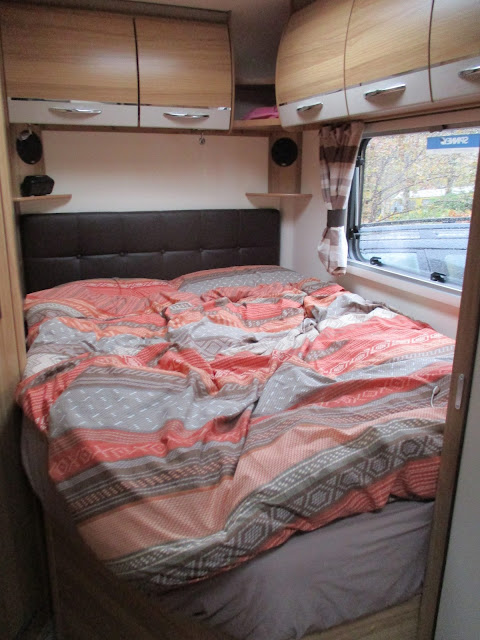 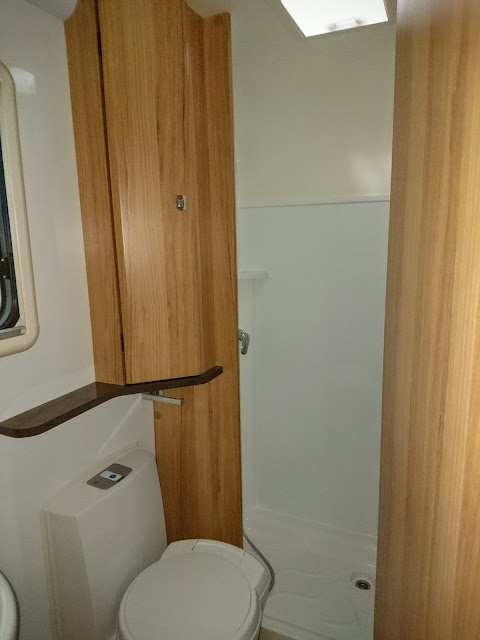 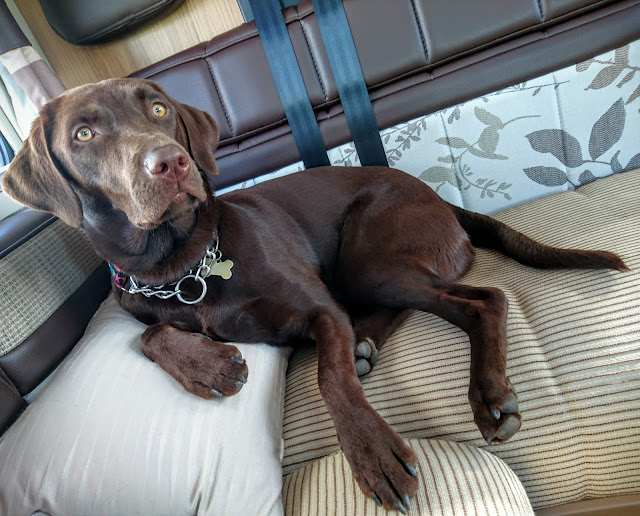 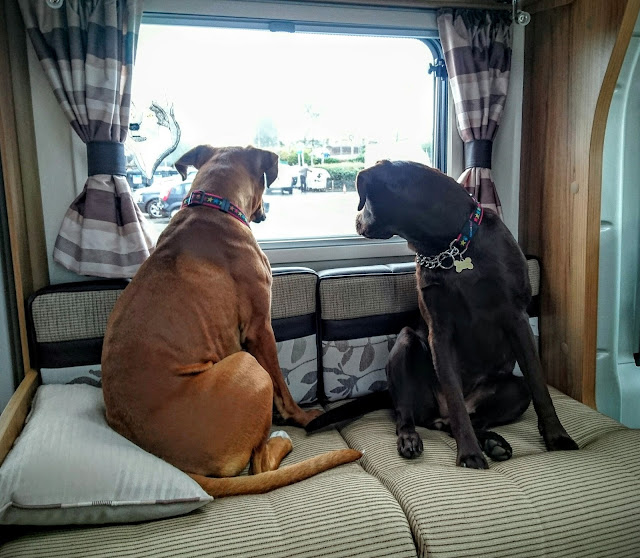 A really good feature is the massive storage compartment (we're referring to it as "the boot"), under the fixed bed. This is accessed either by a door on the outside, nearside of the van (great for wet, mucky stuff) or by lifting the bed on gas struts, like this. 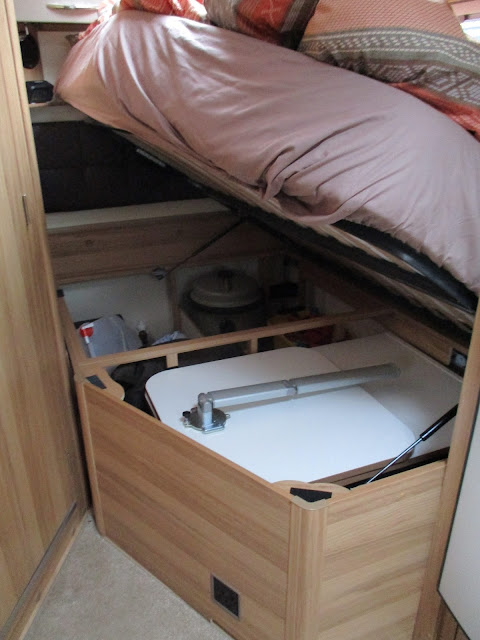 That pic doesn't really show the available space because the dining table is on a storage frame right at its top. Below the table is space for two fully laden backpacking sacs. It really is vast! We've had two trips so far where we've carried all our backpacking gear to allow us to go off on wild camping expenditions along our journey; the van proving a practical tool to extend our favourite hobby.

Personalising a van is part of the fun of motorhoming. We had a couple of mods done before we took delivery. The dealers, Spinney Motorhomes, fitted a wind-out awning, a reversing camera and a two-bike rack. They also fitted a Gaslow system, using refillable gas bottles instead of Calor Gas ones. With a filler on the outside of the gas locker we can fill up with Autogas at a petrol station; FAR cheaper than Calor Gas. They also fitted a second leisure battery; Bailey fit one, but the locker accepts two. And they swapped our satellite dome and TV from the Warwick.

Once home, I started the process of modifying bits an' pieces to suit us...and the dogs. Actually, compared to the Warwick, I've done very little. That's because most of the mods to the previous van were based around making use of the limited storage space. The Bailey actually has more space than we need. We've been able to leave a couple of overhead lockers empty, ready for anyone joining us for a weekend or whatever. One essential though was seat covers. As ever, motorhome upholstery isn't up to dogs. Hence, we had zip off covers made to cover all the cushions and the front seats. We just left the tops of the passenger bench and the front headrests in their original brown vinyl, which we think relieves the look of our covers. 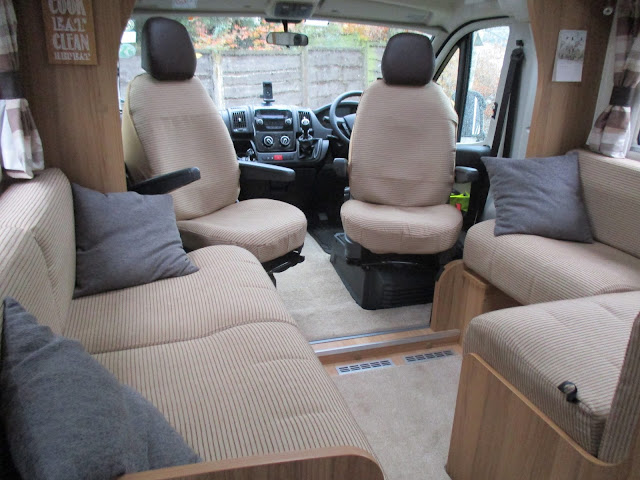 Eagle eyed readers will note in earlier pics that we just had the bottom cushions covered but a three week trip left doggy stains on the pale beige backs so we went back and had those covered too.

The nearside sofa bottom, which pulls out to make the front bed, kept coming out as we drove, so I've fitted bolts to hold it in place. To be fair to Bailey, this was caused by a heavy dog snoozing on them en route. Wouldn't otherwise happen. Likewise I fitted a bolt to the offside sofa base too. 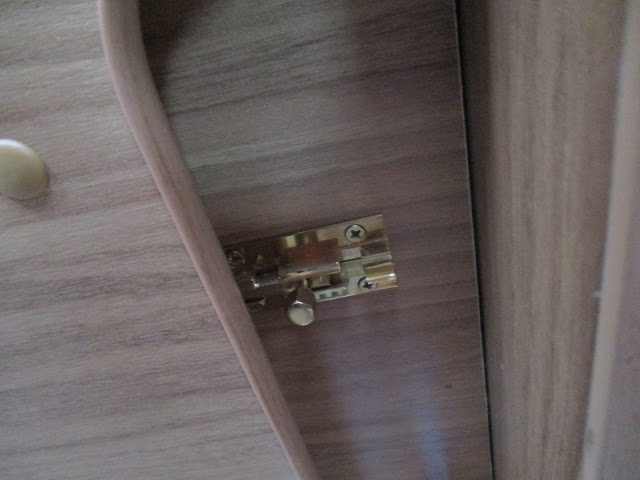 It has the same cooker as the Warwick so the push catch which releases the storage compartment door at the bottom kept being opened by a dog. A length of shock cord fitted around the bracket inside, then pulled around the door when it's closed, stops it crashing open when travelling...or not. 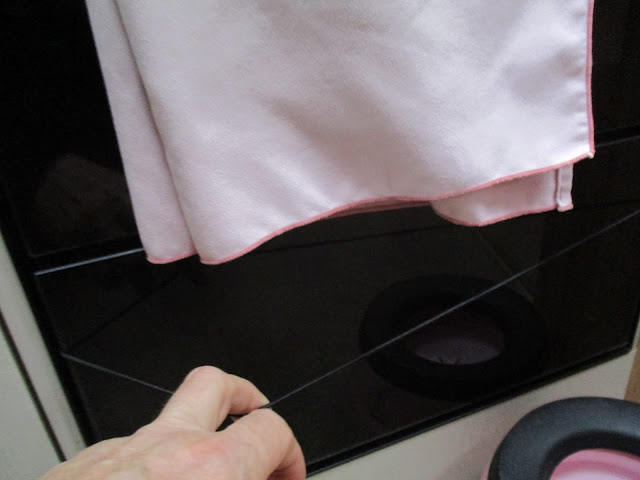 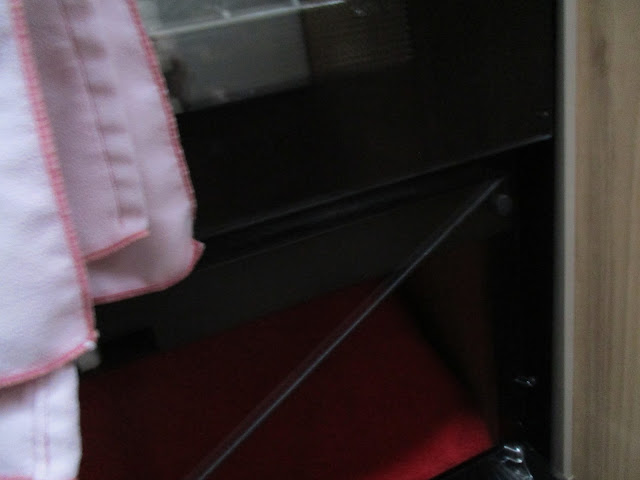 Why don't motorhomes have kitchen roll holders? Who can exist without kitchen roll? I bought an inexpensive hanging holder before the van arrived, but Chrissie came up with this inspired solution. One of the shelves in the kitchen can store said roll and it's dispensed by pulling it under the chrome rails. Brilliant! 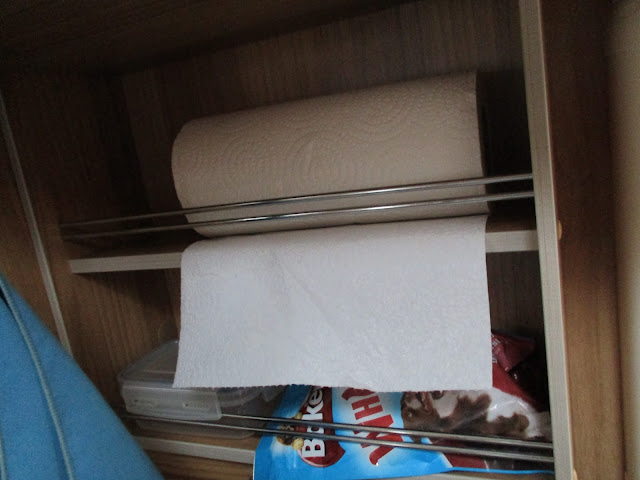 We felt we were lacking a coffee table, not wanting to lift the dining table out from its storage in "the boot" for just a snack. Lots of head scratching brought us to a simple solution. This Isabella table comes as a folding stool with a detachable table top, so good for coffee al fresco. But the addition of a bit of handy foam makes it sit flat on the corner of the offside sofa. Voila, a coffee table! 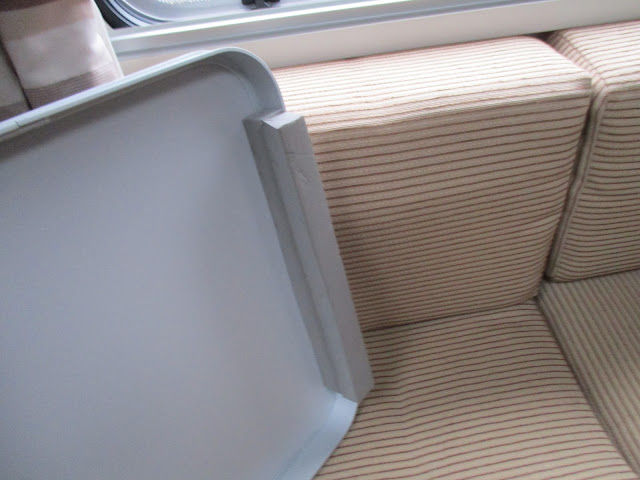 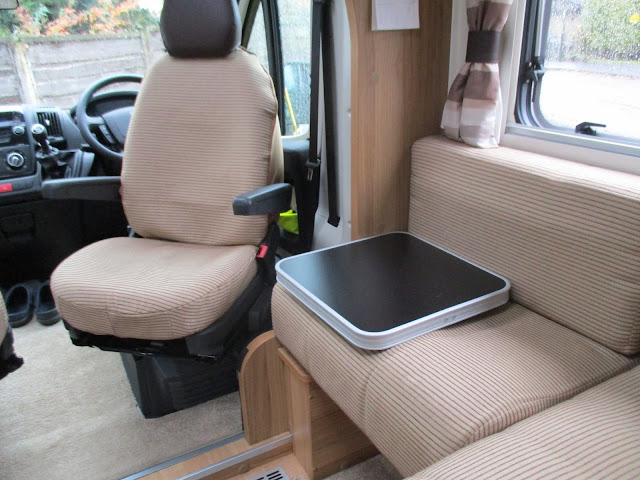 Being so well off for space this stores easily under the nearside sofa, (there's an easy access hatch door), along with all the bedding for the second bed.

Feeling the mirrors could be prone to knocks on such a wide van I invested in some heavy-duty grp covers which stick on the originals. They look unobtrusive in gloss black, which matches the cab. The mirrors are electric and contain such jiggery pokery as an aerial and outside temperature sensor, so could be expensive to replace. 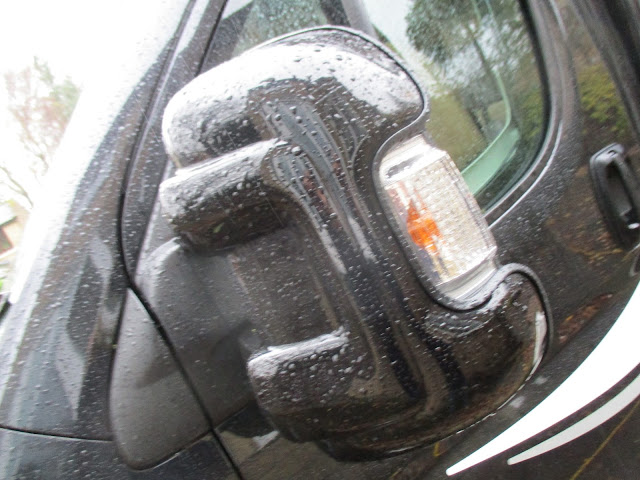 And for now, save for a couple of hooks for towels here and there, that's about it.

Inevitably, fuel consumption is heavier than our van conversion. With that we averaged around 31mpg. So far on trips the Bailey's returning around 27mpg which is something like a 13% increase in fuel costs. In our minds, this is acceptable, because we're getting a lot more space and comfort and this is the only increased cost. The van itself cost less than if we'd bought another similar van conversion. This is due to higher build costs on such vans since all the work has to be done inside the van. With a coachbuilt, the furniture is all constructed before the side walls go on, so much less labour intensive. We've had the Bailey replated to a MTPLM of 3850kg (it was 3500kg) and that has resulted, perversely, in a lower road tax (£65 a year less if I remember correctly). Campsite costs are the same as the smaller van. The heating, an Alde wet system with radiators, is proving more fuel efficient so, in short, we're not complaining about fuel consumption.

As I write, we're just over three months into our ownership of the Bailey and we've covered around 1500 miles on three trips; the longest being three and a half weeks in the Dales and the Lakes. After each trip we like it more. And the dogs? They think it's just fab. 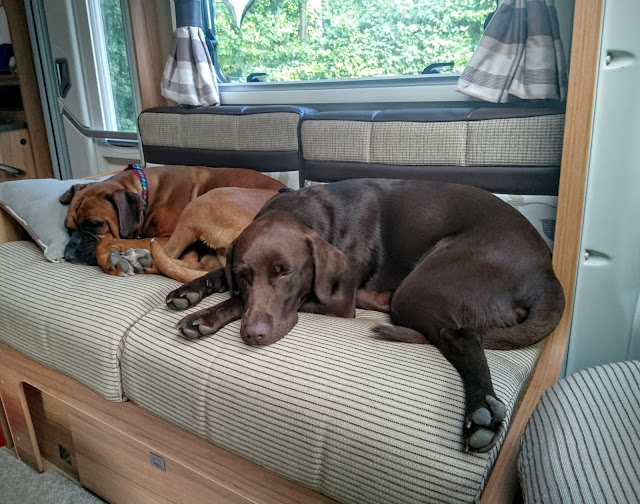 Keep an eye here for any further mods and other such shenanigans.