We hadn't been to the Lakes together for years so this made the perfect reason for our trip for February half term. We thought we'd try a Caravan Club CL near Haweswater. But Chrissie had no work on the Friday so we set off early and aimed to wild camp at Ribblehead in the Dales. Chrissie has lots of childhood memories around this location. It was fine when we set off and still ok when we arrived. We passed a reasonable night; disturbed only by passing motorists who felt that sounding their horns was an appropriate greeting. When we awoke next morning it was to the sound of, seemingly, hordes of fell runners setting off in ... snow! 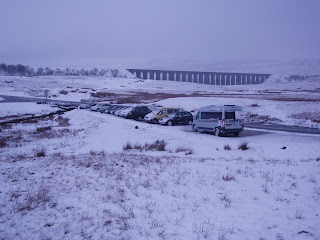 The lay-by, empty the night before, was now full ... at 8 o'clock in the morning! Still, we enjoyed breakfast and set off to the Lakes.
The week was passed uneventfully. The weather was pretty dismal - typical Lakes weather in fact. But we made the most of it and enjoyed some walks. 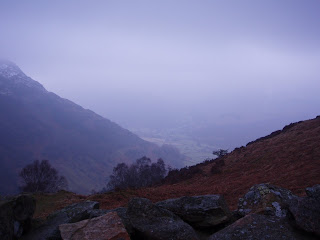 in the mist and rain. 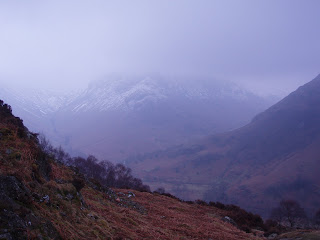 The dogs were happy though, 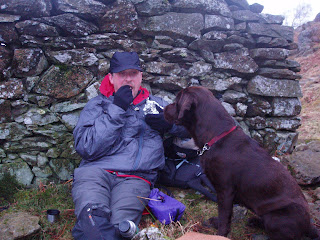 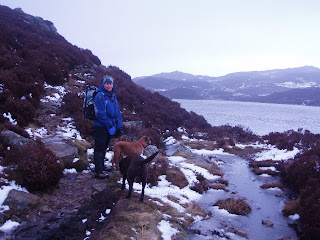 ﻿
and used the week to make quality control checks 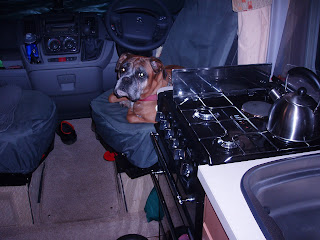 of their preferred sleeping locations, 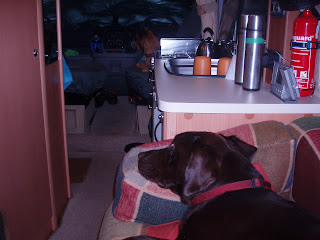 ﻿
while the two of us danced attendance on them ... as ever.
We had a pleasant enough week but came away with memories of parking charges, crowded towns and the sense that, since we'd become very used to quieter locations - Northumberland, the Dales, north west Scotland - perhaps, just maybe, the Lakes seems to attract many with less imagination. No offence intended. Each to their own eh?
Posted by Geoff Crowther at 20:57