All change; our new travelling home.

When we bought our first motorhome back in September 2010 we never envisaged replacing it. But, never say never, as they say.

My Mum passed away earlier this year. Since then, my Dad's resolved not to let my brother and I wait for his passing to enjoy some of his cash. Bless him. Hence, we fell to considering a new van.

We've loved our travels with our Auto Sleeper Warwick Duo, but things change and, with hindsight, we've found it lacking in two departments. First, the lack of belted travel seats in the back has meant we could never, legitimately, carry any passengers other than ourselves and the pups. And second, I was tiring of making up the bed, late at night. This is primarily a consequence of our being lucky enough to spend extended periods in the van; often 4 or more weeks at a time. What might not seem a hardship for 7 or 10 days, pales after night 35 or whatever.

So, we fancied something bigger. A little research soon revealed a van from Bailey's range. Bailey of Bristol have been building caravans for yonks (we had one briefly) and in recent years entered the motorhome market. A number of refinements has resulted in their current range. I particularly liked their innovative wood-free bodywork construction. By the way, unlike our "van-conversion" Warwick, these are "coachbuilt" ie with a bespoke, caravan-like body built behind the cab.

With our stated requirements in mind it was easy to settle on the four berth Approach Autograph 745, a 7.4m long mammoth; about a metre longer than our previous van, (including its luggage box on the back). It's also around 270mm wider. That's gonna take some getting used to. 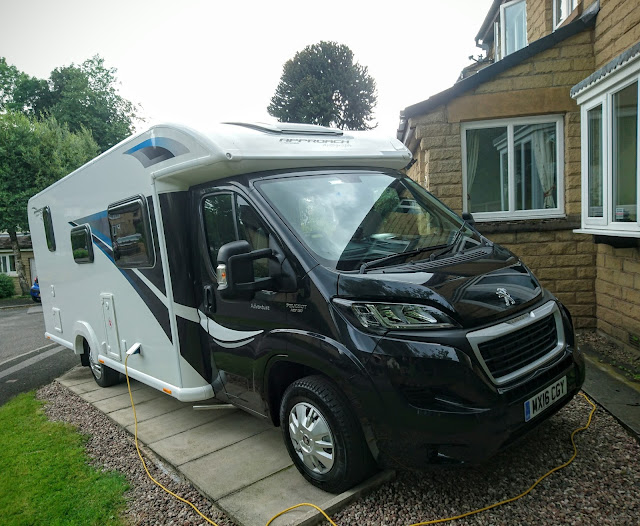 The benefits of those extra centimetres are inside of course. At the front is a comfy lounge made up of the swivelled front seats, the two forward facing passenger seats (which become an L-shaped seat when not using the table) and a sofa. In the middle is a well-equipped kitchen including a full oven, microwave and huge fridge. At the rear is a fixed double bed, roughly the size of a normal domestic one and a loo/washroom with a separate shower cubicle, which is almost as big as ours at home. There are masses of lockers and a huge space revealed by lifting the mattress on the fixed bed (aided by gas struts) which is also accessible by a door on the outside of the van. The front seats can be pulled out and juggled a bit to make a second, slightly smaller, double bed. 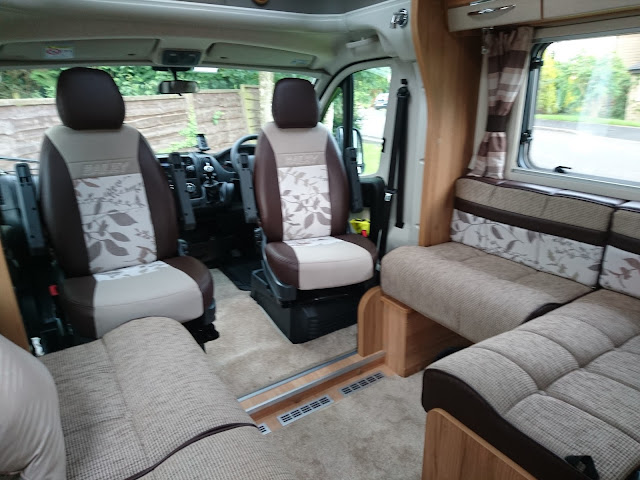 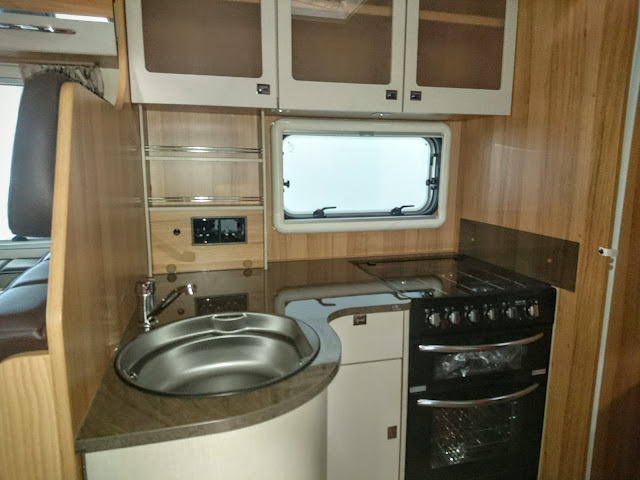 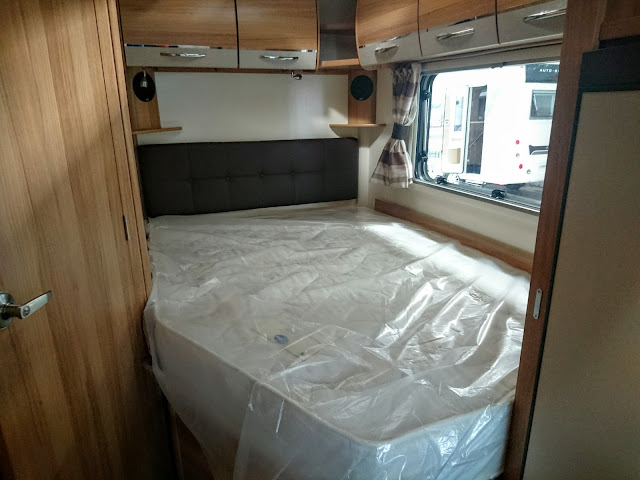 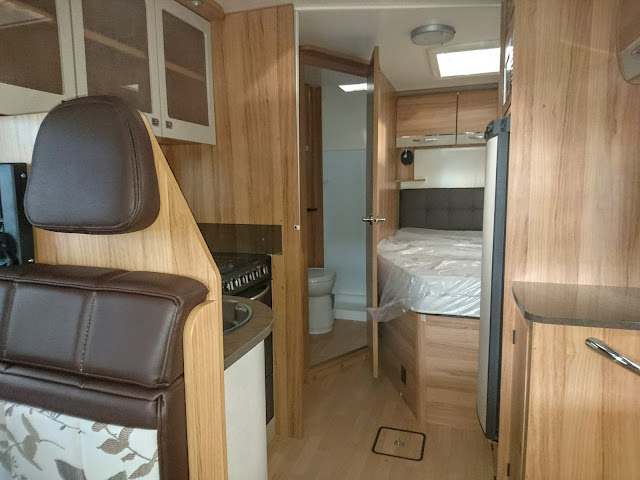 All the Bailey Autograph range are fitted with Alde "wet" heating systems, where water (and anti-freeze) are pumped around radiators, similar to a home system. It's said to be quieter and more fuel efficient than the, more common, blown-air type.

We had a Bailey extras pack fitted comprising a reversing camera, wind out awning and bike rack, and also specified a second leisure battery (one is fitted but there's space for two) and a Gaslow system, instead of Calor Gas bottles, which allows us to fill up with automotive LPG at petrol stations. We had an underslung LPG tank on the Warwick. We also had a Thatcham category 1 alarm installed.

We took our Warwick in early so the dealer could swap our satellite dome and TV over to the new van, too.

The van's been supplied by Spinneys of Cheshire from whom we bought the Warwick, and they took our old van in part exchange. They provided good service, especially during the warranty period with our Auto Sleeper, so we were pleased to find they were the local dealer for Bailey too. Thanks to salesman Richard and workshop manager Nick (and his technicians) for supplying the van and fitting it out to our exact requirements. They're a good bunch at Spinneys and we'd recommend them if you're in the market for a motorhome or caravan.

We were lucky in that Spinneys had a 745 in stock, avoiding the need to wait for delivery. Shortly after we agreed the purchase they had a queue for 745s. We feel we were fated to buy this van; just like our Warwick, which Spinneys also had in stock when we wanted one.

Chance, along with the generosity of my Dad, have meant we could buy this gorgeous new motorhome and, in recognition of that, we'll make sure it gets used. My Dad expressly wants us to enjoy life, "while we're young". I love him ... I'm sixty two! We clocked up over 50000 miles in the old van in almost six years. Let's see what we manage with this one.

The dogs love it already. 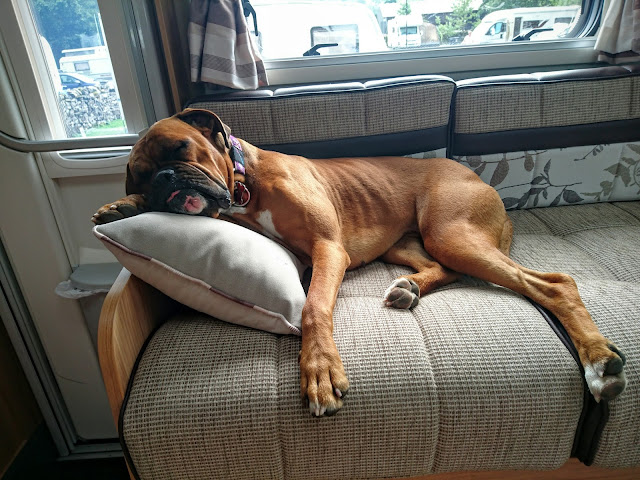 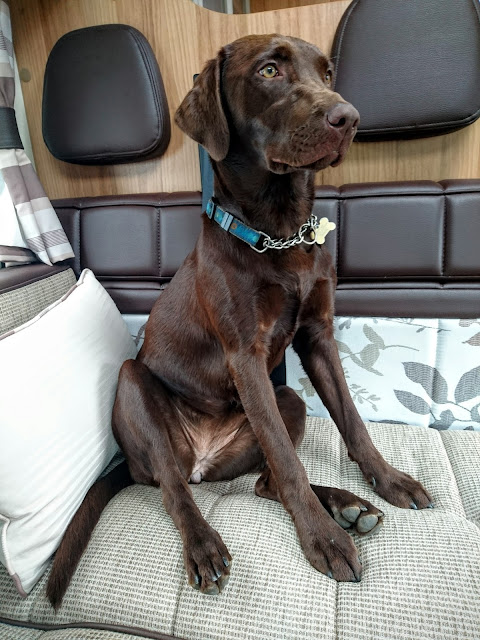 We send our warmest wishes to whoever buys our lovely Warwick Duo.

Bring on the adventures! 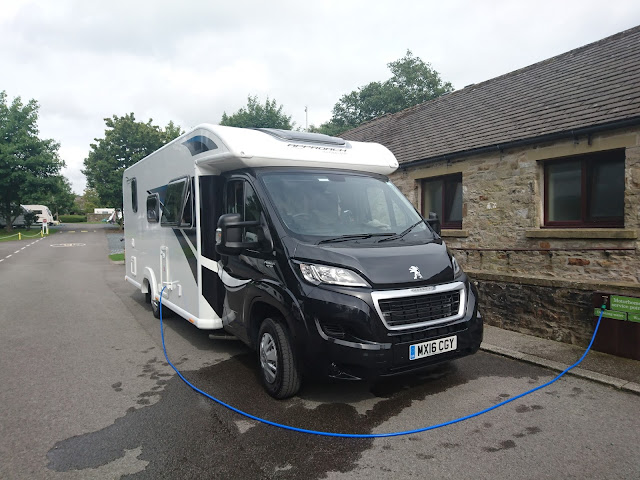 End of an era.

Yesterday I finally bit the bullet and sold my motorbike; my beloved BMW R1200GS Adventure.

It wasn't too hard. If I'm honest, I gave up riding it seriously around four years ago, following my second trip to Morocco. Stopping motorbiking was a consequence, largely, of the purchase of our motorhome. This had given a new focus to our travelling. I was retired and enjoying the freedom our van offered.

Losing a significant amount of weight a couple of years ago played its part too. I could no longer see myself travelling without being able to exercise regularly, which is harder on a motorbike. Without the necessary gear to hillwalk on board, I couldn't see me taking walking seriously. Also, I'd become a born-again cyclist and, with a couple of serious cycle tours behind me, I realised I preferred pedal two-wheeling to petrol power.

So, it's gone and I'm not too sad. I sold it, with minimum fuss, back to the BMW dealer who supplied it. 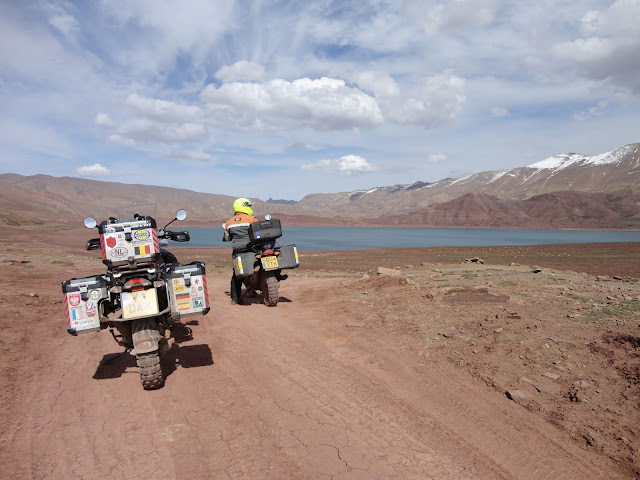 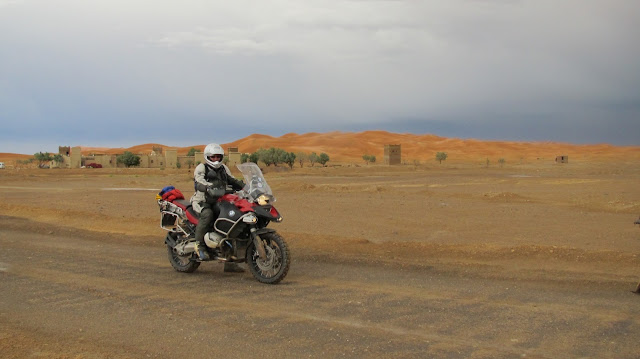 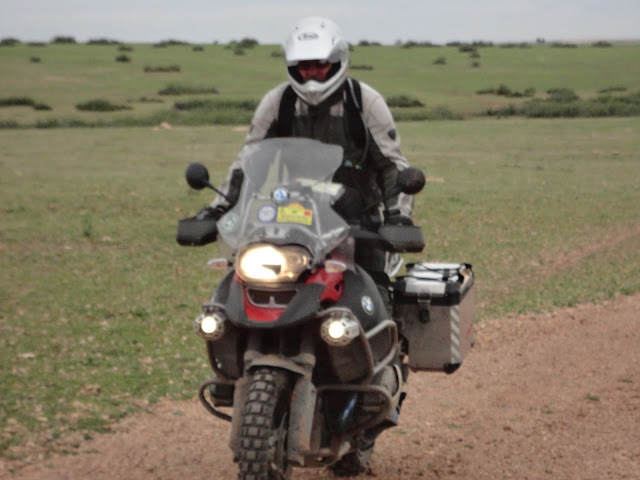 My days as a motorcyclist are over. Yesterday, was probably the last time I'll ever ride a motorbike.

But, life is good. We're presently looking forward to a week-long trek in Arctic Sweden in August and, simultaneously, awaiting delivery of a new motorhome; more news of that soon.

No tears. No regrets. Life goes on.