It’s late April and we’re heading north…again. As usual, we spend the night with my dear Dad in Wetherby then push on to pass a night in the countryside of County Durham. 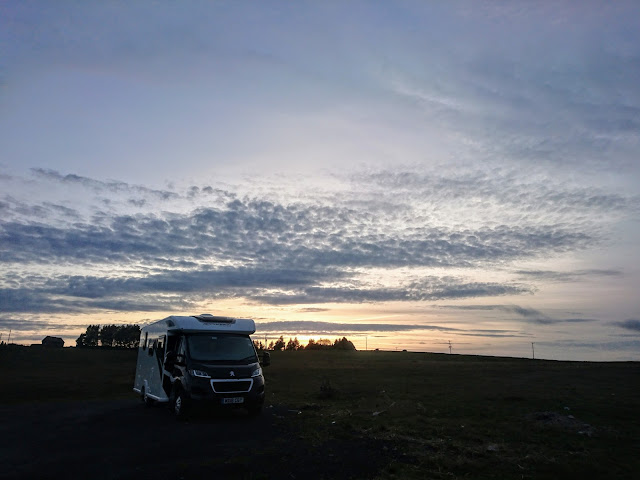 North, north we go into Scotland. We cross the Forth Road Bridge and wonder at the new crossing, almost finished. It’s likely we’ll be on that if we’re up here next year. Another night goes by in a quiet car park near Pitlochry.

Our next stop is Newtonmore Hostel, where Chrissie’s dropping off a food parcel. She’ll be here in a coupla weeks, along her TGO Challenge walk.  Ali makes us tea and welcome, and we swap stories. We drive up the road into the hills and take a pleasant walk up Glen Banchor. 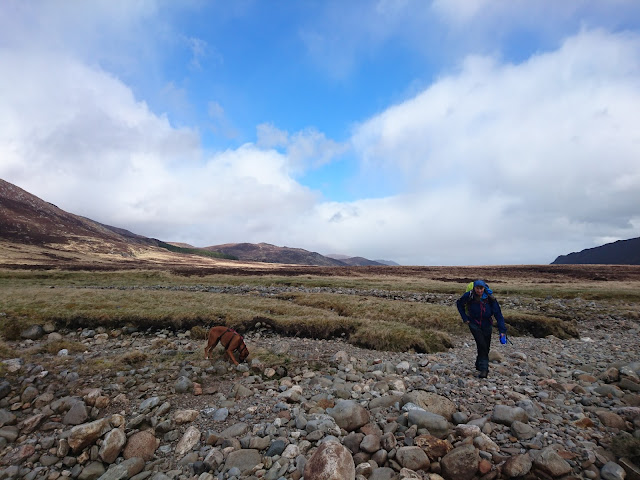 The following day it’s Morag’s Lodge in Fort Augustus with another food parcel, then along the road towards Glen Shiel. We overnight by the loch near the Cluanie Inn and, in the morning, we follow a track up into the hills for an hour or so. Along the way, three walkers approach.

“You must be Geoff…and Chrissie.”
We’re quite taken aback.
“David”, he says, “…David Lintern.”
Now, it’s fair to say, we both follow David on Twitter. He’s a very accomplished photographer and writer. He follows us, but it seems unlikely he’d know us.
“How did you recognise us?” I ask.
“Chrissie’s headband and your red glasses…and the dogs of course,” says he, smiling.

A small world. We enjoy chatting with David, Stefan (who we also follow on Twitter) and Mike (who we follow now). We gossip and laugh and the dogs force their attention on the poor guys. It’s made Chrissie’s day. She’s always wanted to be recognised as, “the woman with the boxer”.

After coffee at the Inn, and a further chat with David, we’re away to the Caravan Club site at Morvich. We have an assignation here with James, and Mark Waring. James arrives shortly after us at the site.  He’s been walking and backpacking around the Highlands for a week or more already. He’s staying the night in our apartment on wheels and we talk endlessly, generally take the piss out of each other, eat, drink, then drink some more, before making a laughable attempt at assembling the spare bed.

There’s snow around. James wanders off in his Doblo for a walk and we take a hike up Glen Lecht. Come the afternoon James returns, his walk thwarted by cold and snow, and we drive to the store at Glen Shiel to meet Mark, who’s coming off the hill. He’s wet! Mark is a seasoned Arctic traveller who, along with James, gave us loads of advice on our Arctic Sweden trek last year. We’ve never met before but conversation is easy, informative and amusing. It’s strange to think the four us will all be in the Scandinavian Arctic later this year…in different locations and slightly different times.

Back at the site I cook up an all-day breakfast for our guests before Mark’s bus connection is due. James is off too, transporting Mark to the bus stop.

More snow means we spend a further two nights on the site before heading further north.

We camp outside Shieldaig then head towards Ullapool. On the way, Islay displays signs that her anal glands are causing her some discomfort. She and I are off on the Sutherland Trail in a couple of days. A vet is needed. We have insufficient data to search the internet but Twitter comes to the rescue. A quick question and several friends send us details of local vets. It means a detour to Dingwall but not too far. Choccy paws is soon relieved and we take advantage of downtown Dingwall for food shopping, diesel and LPG. Then, a quick dash up to a camp by Ardvreck Castle. 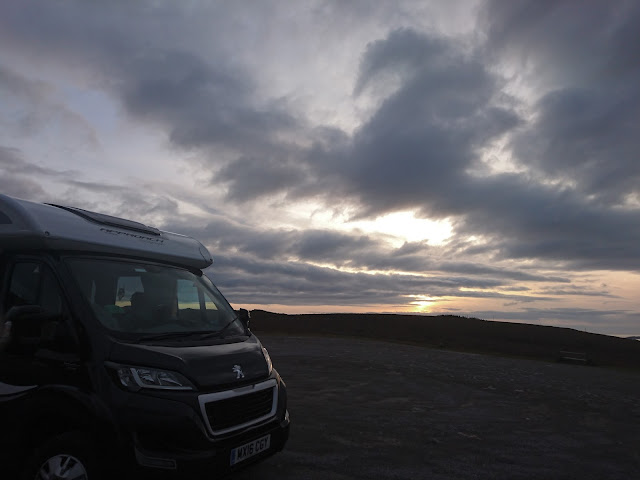 In the morn we hit Lochinver, and Islay and I set off for a week on the Sutherland Trail. The walking is delightful as we head out past Suilven and Canisp. Islay has her bed, pjs, towel, waterproof coat and bowl in her Ruffwear Palisades pack. The load’s about 2kg which we think is more than enough. Textbooks say a dog could carry up to 25% of body weight, which for Islay would mean 6kg. I prefer to keep her happy so I’m carrying her food, as well as mine, for the four day leg. With three nights, it’s equivalent to a six night load for me, since her food weighs similar to mine. So the sac’s heavy. Because of this, and my increasing dislike of exposure, I’ve no interest in climbing Suilven. Some may be surprised at my discomfort with exposure, given extensive mountain rescue experience. But in rescue, the emphasis is always on safety of the team. Hence you’re always secured near steep drops. Also, my attitude has changed with age. I did Crib Goch and the Aonach Eagach and other such tomfoolery many moons back, but nowadays I’m happiest travelling through wild country. I will climb hills but it’s not a prerequisite for an enjoyable trip. 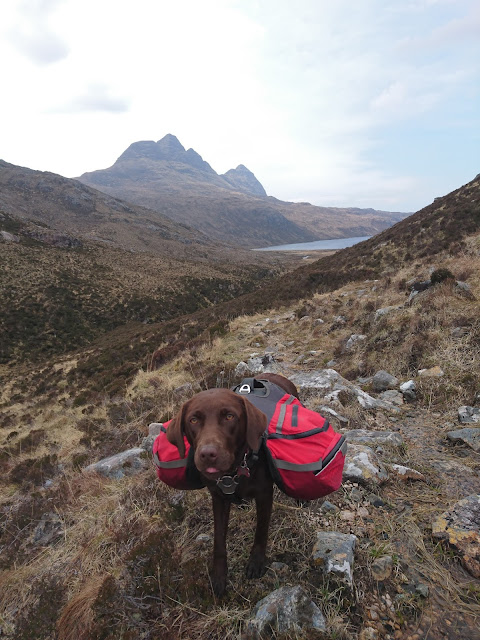 We camp above Lochan Fada. It’s fine but there’s a stiff breeze, the first time our Terra Nova Southern Cross 2 has seen wind. The windward side blows in quite a lot but it remains stable, its six feet anchored solidly to the ground. Me an’ the pup are snug inside, reading (Islay’s a Stephen King fan), eating, drinking and snoozing. In the morning we climb Canisp’s lower slopes. The terrain reminds me of Arctic Sweden. As we drop towards Inchnadamph we tackle an expected river crossing. I remove boots and socks and don mesh running shoes. It’s straightforward. The water is just below my knees. Reaching the far bank I stop and turn. Islay’s still on t’other side. I call her. She crosses the easy bit but balks at the deeper section. Opening her pouch of meaty grub won’t even tempt her. It’s no use. I leave my pack, cross again, attach her lead and cajole her into following me. Hence, I complete the crossing three times! I love my dog. 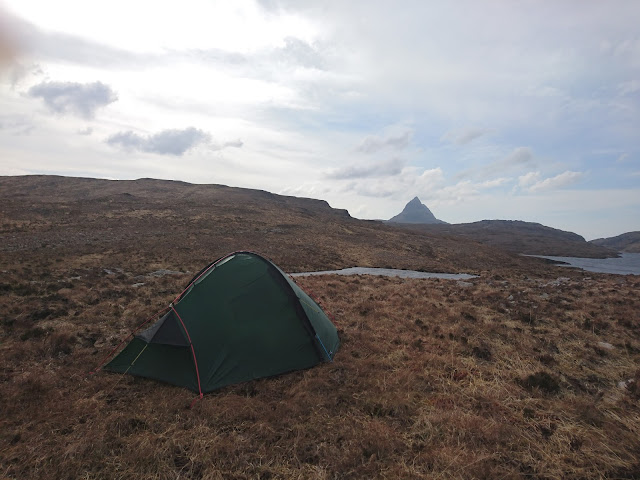 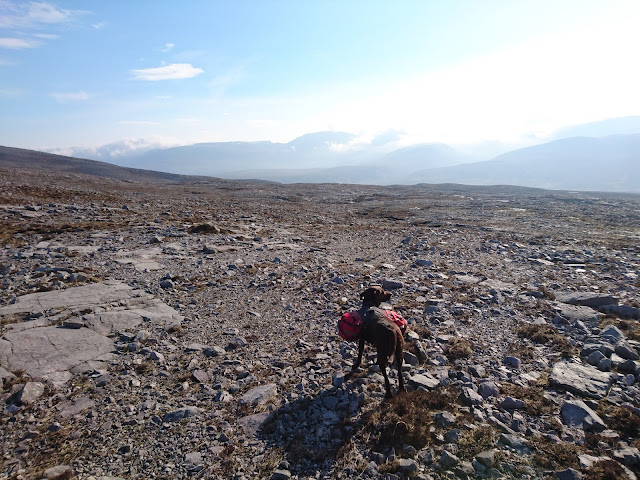 We hit the road for a while and set off for a mile or so before we turn onto another track. On the way, we meet Chrissie, pootling down the road in the van. She offers tea in a nearby car park. It’s only when we stop to remove Islay’s pack that it becomes clear she’s uncomfortable. Why, we’re not sure. After a treat or two she settles into a deep sleep. She’s knackered. After much discussion we decide she needs a rest. I can only conclude it’s a combination of the pack and running around on difficult terrain. My dog’s health is more important than slavishly following a trail. I also become disconcerted at the thought of walking 4.5 miles along the busy A road near Kylesku. It’s probably a consequence of suddenly finding myself back in the four star luxury of our home-on-wheels. If I hadn’t met Chrissie I’d just have carried on…and probably found myself in a difficult situation with an unhappy dog. Plans are rehashed completely. 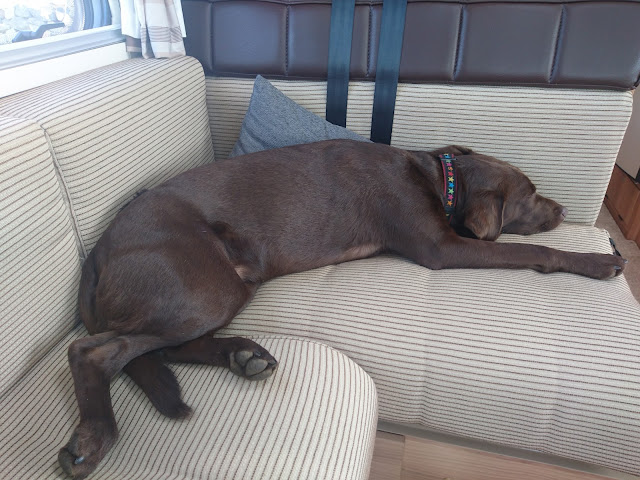 We come across the beautiful campsite at Scourie and spend two nights there. By a remarkable coincidence we note from Twitter that Stuart David is on the same site with his wife. A quick exchange of tweets sees Stuart popping round for a chat. 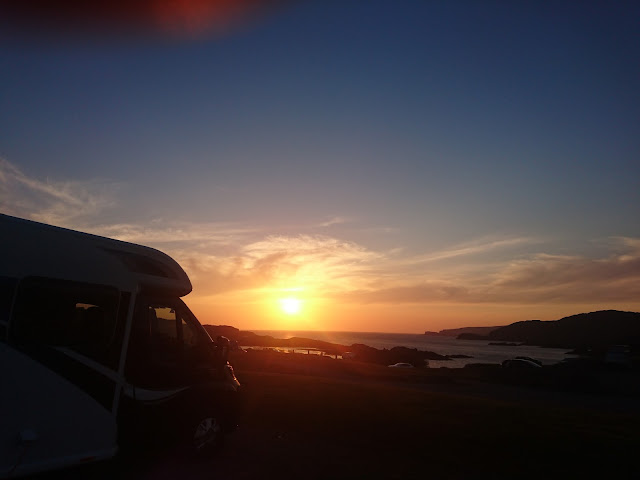 Islay is back to her normal, bouncy self. We drive down to West Merkland and Chrissie drops me off with two night’s supplies. I’ve decided to take an easy route, with short days, the better to accommodate my canine pal. I love backpacking with my dog and only leave her behind when it’s absolutely necessary.

Passing through the Bealach nam Meirleach on an old track is a fine walk. We meet a friendly gamekeeper who stops his truck for a chat. We pause for lengthy snack breaks and photos. The sun shines. Life is good. Camp is made on higher ground with a magnificent view of Ben Hope. 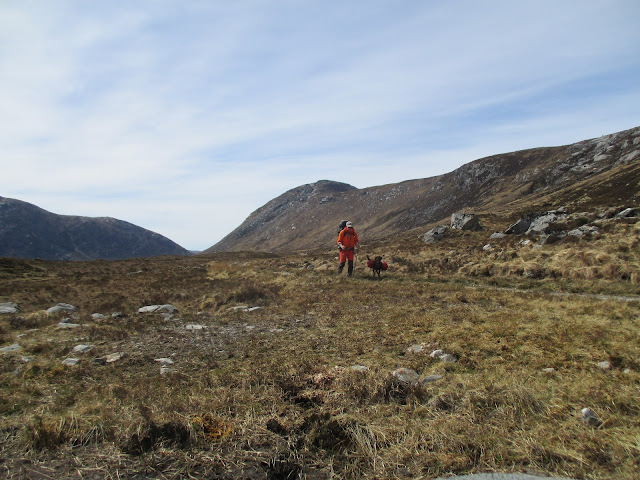 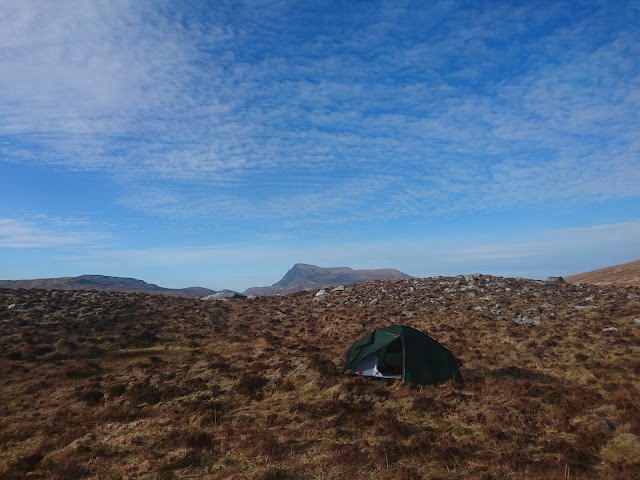 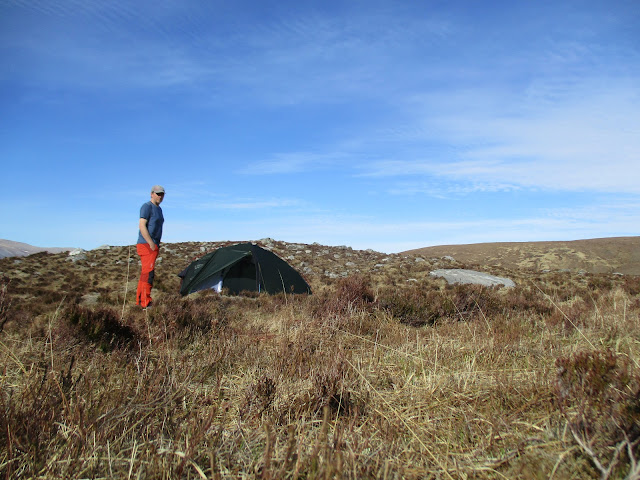 The morning brings more fine weather and we pick our way down slopes to meet the track from Gobernuisgach Lodge, west to Achfary. The steady climb up to Bealach na Feithe is easy and gives views of the sweeping Coire an Achdaich. We drop over the bealach to camp in a truly idyllic location by a clear, tumbling stream. It’s level, grassy, dry and the sun beats down. Choccy Paws and I settle to an afternoon of eating, drinking and sunbathing. Bliss! 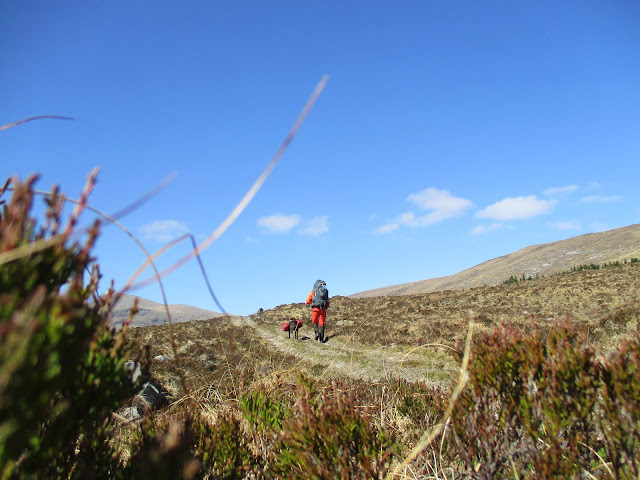 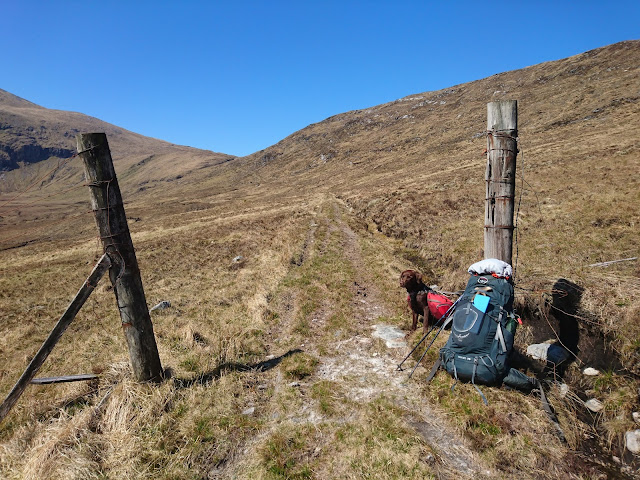 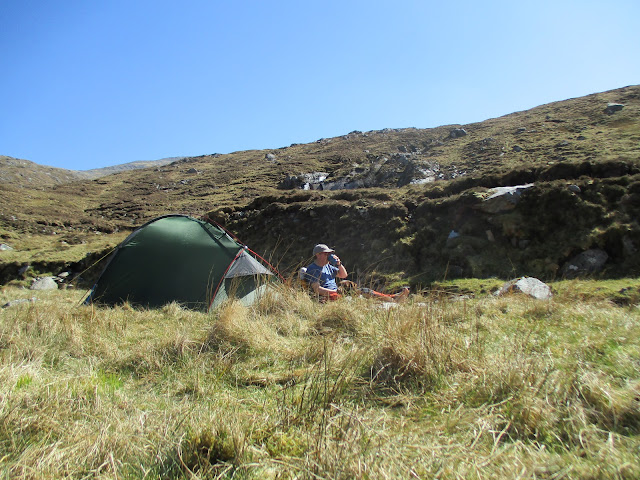 Deer graze on nearby slopes as we retire to our slumbers, to the accompaniment of the babbling stream. The morning brings a pleasant wander downhill where, by the old cottage at Lone, we meet Chrissie and Pebbles. We hear the tale of Chrissie’s encounter with a member of the upper class intelligentsia (otherwise known as a twat). I do my best to soothe her frazzled nerves. 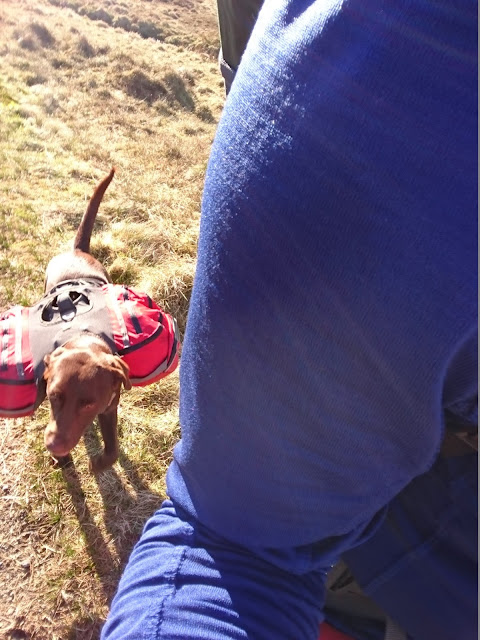 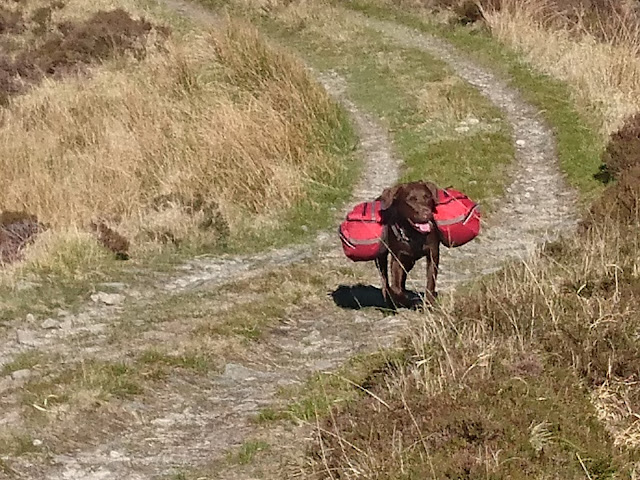 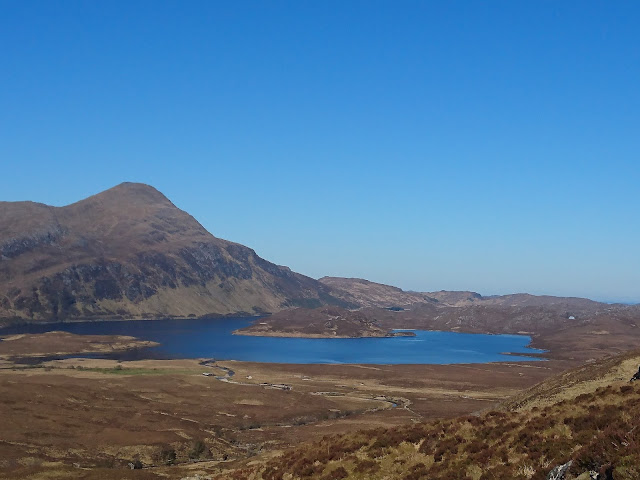 We’re on the road again. We explore Tongue then drive down Strathnaver, scene of some of the worst of the Highland Clearances. Then it’s down through Altnaharra to Dingwall again and here, beautiful Rosemarkie on the Black Isle. We spend an entertaining evening meeting Twitter friend Callum who lives just down the road in Avoch. Callum’s intelligent and outspoken, and it’s good to hear his views on Scottish politics, independence and, his speciality, wildlife issues up here in the Highlands. As I write, we’re planning on leaving tomorrow for Glen Shiel again where, on Friday, Chrissie will embark on her solo TGO Challenge. For me…two weeks alone in the van with daft, but lovable pups. We’re three weeks into our trip and it’s been just great so far. I set off with some trepidation about driving this much bigger van on Highland roads. It’s been fine though. Single tracks are no issue at all, being well served with passing places. On narrow, two lane roads we’ve found other drivers to be mostly considerate, especially the professionals in their HGVs.