It's now operation day plus 8.

My admission into hospital last Monday was not without problems. I never got the call to go in, as promised, and instead ended up researching the correct ward on the internet and phoning them direct, twice, before they agreed I could go in. On arrival Chrissie and I were left, out of sight, in a day room for 45 mins before I was taken to my bed. Having now spent four days there I can begin to appreciate the understaffing on wards and why I wasn't attended to straight away.

The operation, early on Tuesday,was successful, though I wasn't quite prepared for how rough I would feel once I came round. There is proper focus on the statistical risks of the operation but it would probably come over quite negatively if you were told just how shit you'd feel. However, that lasted only for a day or so before I began to feel a bit better. To be fair it was mostly discomfort, rather than pain.

I'd awoken with a drip into my left hand for self-administered morphine, a catheter to allow draining of urine, a drain from one of the wounds in my tummy and a mask providing oxygen. Phew!

All of these were removed on Wednesday and I was able to get up and go to the loo. Laxatives helped restore my bowel movements and I began wandering up and down the corridor on Thursday, glad of the feeling of exercise. My appetite was poor though. I managed only a small amount of food at each meal.

Each day prior to Friday I was visited by my transplant surgeon, a different surgeon stopped by on Friday. Every day I saw a member of the transplant coordination team, who are all specialist nurses, and Dr.Anna, my researcher for the follow up I'd agreed to. All of this made me feel very well supported. I referred earlier to understaffing. None of this being a criticism of any individual. My experience was that all NHS staff work hard in strained circumstances. There's lots of waiting though for stuff to be done and it was nice that the transplant coordination nurses and Dr.Anna often stepped in to perform tasks in lieu of ward staff, for which I was very grateful.

On Friday morning I was told I'd probably be able to go home but there then followed a long day of waiting for a blood test result, analysis by the ward doctor and waiting for medications to take home. As a result, I eventually left with Chrissie at around 7:45pm.

Every day since coming home I've managed a short walk through our village. Slowly at first. Yesterday I walked around a mile and a half. This is allowed, walking being self-limiting. I'm not allowed to carry a rucsac, nor to cycle until I've seen my surgeon in about 3 weeks from now.

Yesterday Dr.Anna picked me up and drove me back to MRI for another mri scan, blood and urine tests, this being part of the post op research. Anna is very kind and gave me lots of encouragement.

Today, all my pain has pretty much gone. I took only two paracetomol yesterday morning. My appetite's still not good. Something's affecting my taste buds. Coffee, which I love, tastes crap as did the one beer I tried on Saturday night. Bleurgh! I'm not enjoying my home made bread either.

My main sensation is weariness. I'm in bed by 9pm but managed 10pm last night, after episode 3 of Shetland, which I'd been looking forward to.

Forgive my grumblings. I'm just trying to give an honest picture, particularly for readers who might be taking a similar journey. In short, I've survived and am improving every day.  Being discharged three days after the op gives a better technical answer as to how well I am. This unseasonal weather is helping too, making my wanders through the village a delight.

But, more important than all the above, is my friend Jamie. I can't speak in detail of how he is, though we're in regular contact, but his operation was a success. He was expected to be in hospital for two to three weeks following the op but he went home yesterday, after just seven days! My/his kidney appears to be working well but he has to return to a clinic on Friday and again each week to check how things are going and, critically, for any signs of rejection. But, Jamie is off dialysis...for the first time in around 12 months. I'm very pleased.

Since coming home I've cried often, usually as a result of seeing Jamie's progress. My emotions are heightened right now, but I do feel positive for both myself and Jamie.

As always, I wish Jamie well.

And God bless Chrissie who is pandering to my every need at the moment.

I'll finish with some positive images of the last few days, when I've been out and about and visited by our precious Noah. The Sunshine Squad (aka Pebbles and Islay) are never far from my side, oozing healing love from every pore. 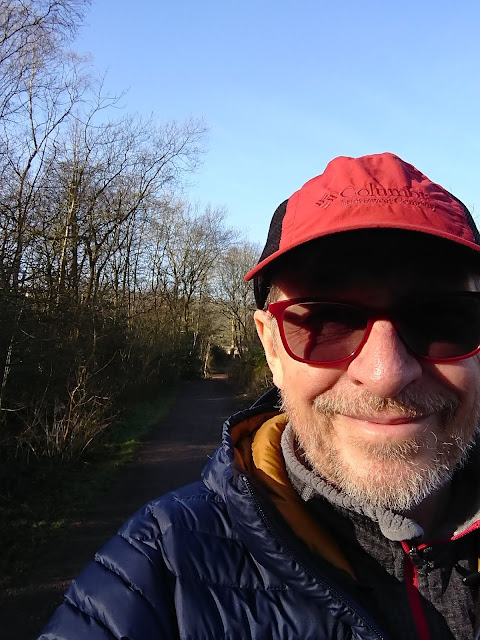 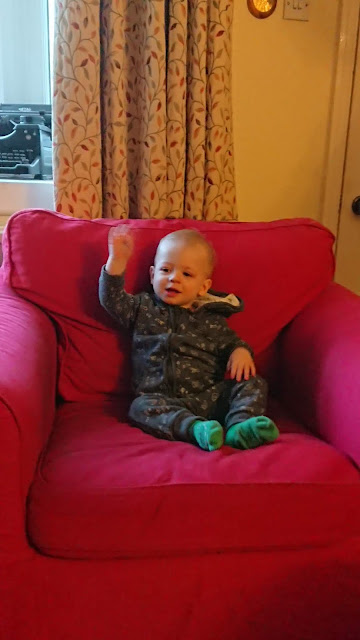 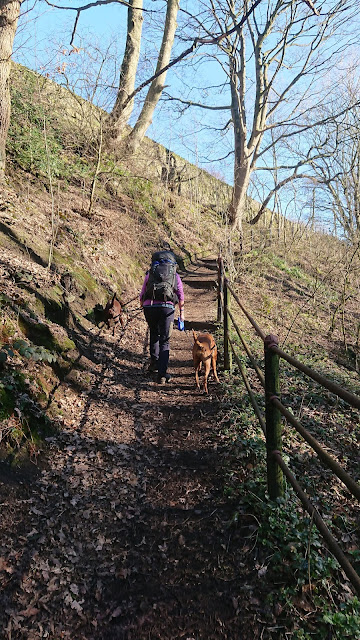 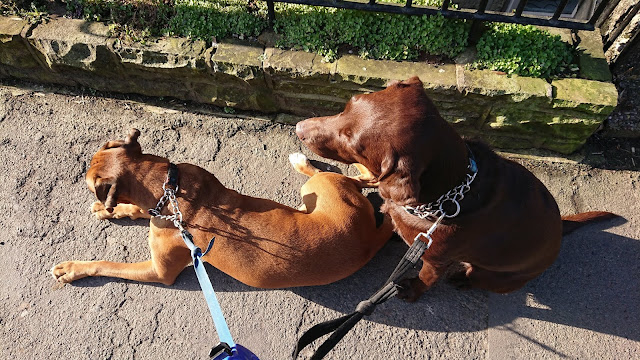 Yeah, I am a bit superstitious, I never miss bidding good morning to solitary magpies, hence titling this "part 12A".

We're pretty much there. For me it's the end of a 9 month journey, but for Jamie it's been considerably longer...well over a year.

I had a great weekend of walking and camping on Kinder with my pal Dale, which successfully distracted me from the job in hand. Thanks Dale.

We'll take the dogs for their daily walk this morning then, this afternoon, Chrissie and I will await a phone call, twixt 3.30 and 4:30, to tell me to go down to Manchester Royal Infirmary. I trust that's a formality cos Jamie's already ensconsed in Cardiff University hospital...preparing and waiting.

Chrissie will drive me down and tomorrow my operation is scheduled for 8:30 in the morning. I fully expect to be out of it for much of the day.

I'm nervous. Who wouldn't be? I have confidence, though, in the expertise of the renal transplant team in Manchester; the most experienced in the UK.

The operation involves three to four small cuts to allow access for tools and a camera, one being larger for hand access and removal of the kidney. Technically it's a laparoscopic hand assisted live donor nephrectomy.

Following the op my kidney will be transported down the motorway system to Cardiff. Jamie's op is scheduled for late afternoon.

Poor Jamie's been on dialysis pretty much every day for the past week and he'll be on it for all of his hospital recovery, two to three weeks. And, of course, Jamie's operation is significantly more complex. He'll receive "my" kidney but his existing two will remain in place.

Best guess, I'm hoping to be home by the weekend, but that depends on my post op recovery. There will then follow several weeks of careful rehabilitation to ensure my wounds heal well.

Many thanks to all who've been kind enough to give me moral support on this journey. Whilst I'm not seeking bouquets, I do really appreciate it. Special thanks to Chrissie; I couldn't have got this far without her support.

Next time I update on here it'll be post op.

I wish my friend Jamie well.

Wish us both luck. Hold us in your thoughts. 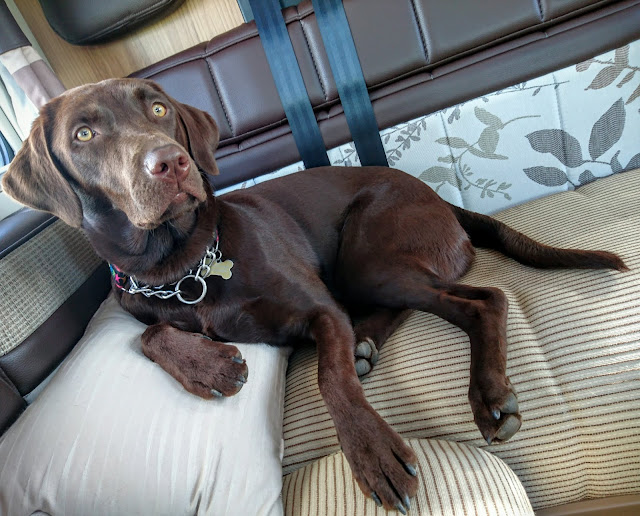 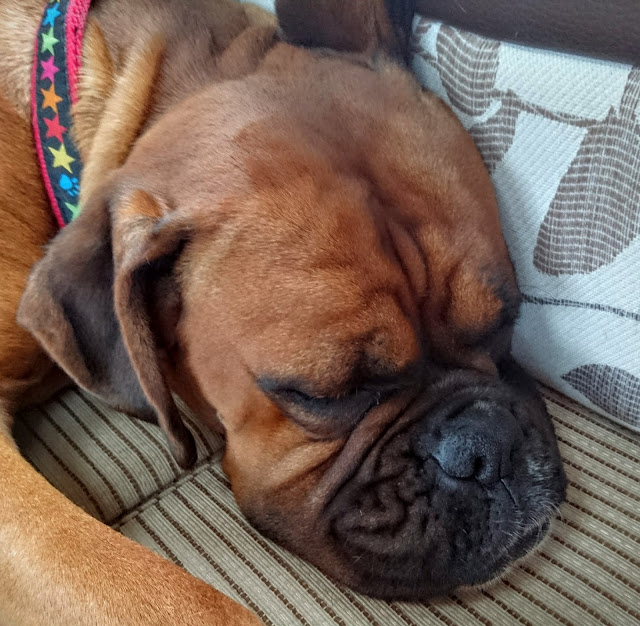 To read the whole story go to my kidney donation page which you can access on the left side of this blog.
Posted by Geoff Crowther at 08:39 9 comments:

Regular readers will know I have an appointment at Manchester Royal Infirmary tomorrow for an operation on Tuesday, so I'm pleased when Dale asks if either us fancies a camp this weekend. This'll be my last chance for a while.

It's been mild and dry all week hereabouts, so we head out for a fairly high camp on the south western slopes of Kinder. Islay's with us and she enjoys bimbling about and helping Dale as we stop to filter water en route. 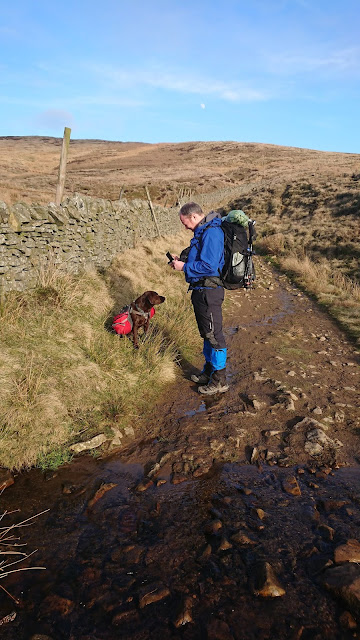 In a short while we're up at our chosen spot. Despite the lovely weather there's nobody here. Islay plays in the grass as we erect tents. 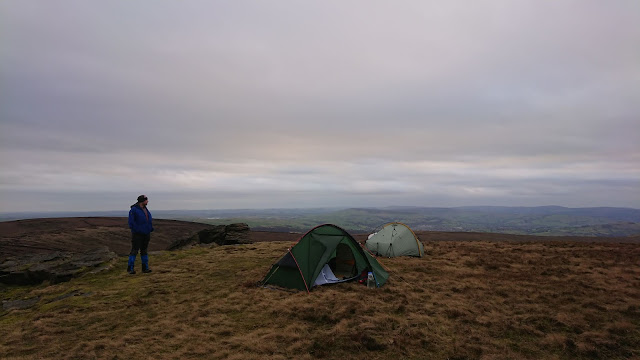 No sooner is the tent up than Choccy Paws is in her bed. For the very first time it's her ultralight Woof Bag, made with love by Chrissie. I relax with a brew. 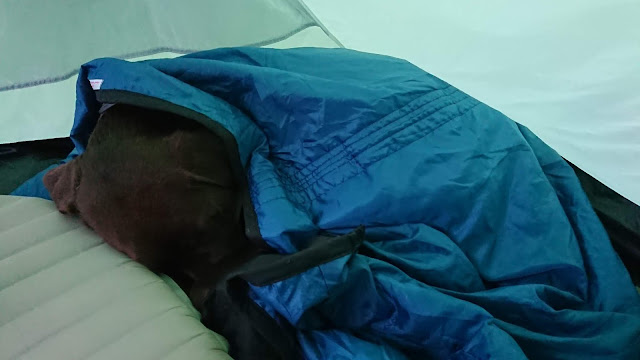 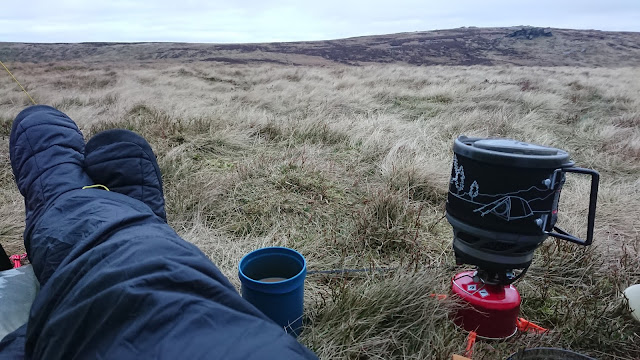 Here's the ultralight Woof Bag packed in its compression sack. It weighs around 400g and proves plenty warm enough for Islay when she's wearing her fleece pjs, in a night seeing a low of around 5C. For more information see here. 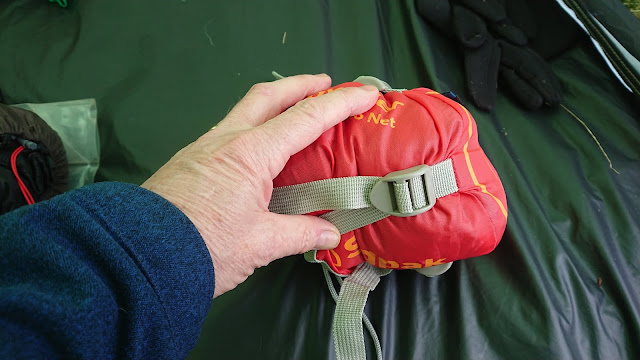 It's a beautiful evening. There's a view down to Manchester, which makes me pensive about my upcoming stay there. 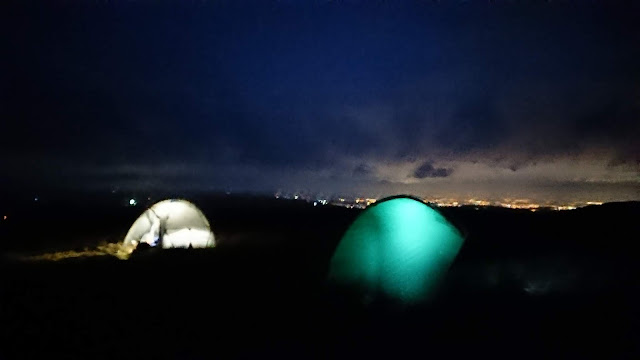 The night is windy. The flapping of tent fabric and a racing mind make for a fitful night's sleep. 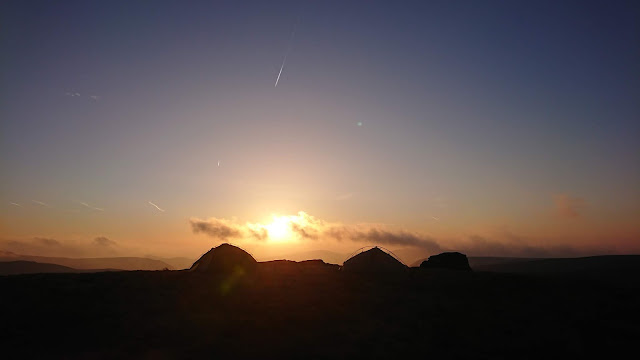 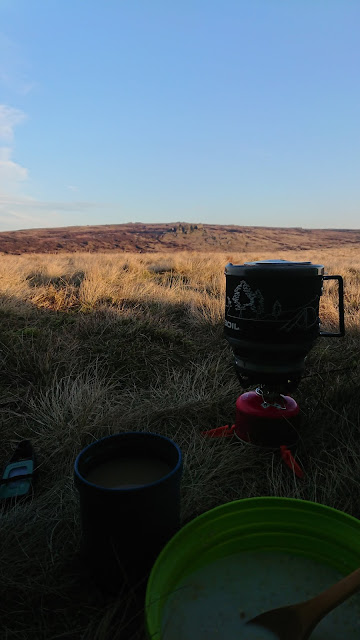 We decide on a route round the western edge path before returning to Hayfield. On the way, Islap poses at the Kinderlow trig point. 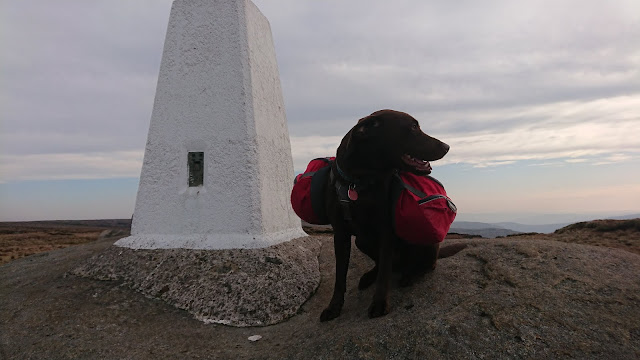 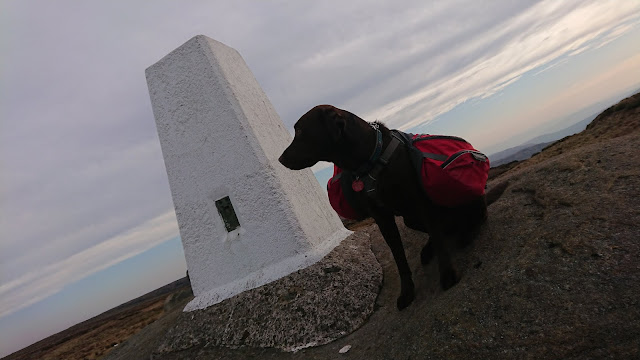 Again, it's bright and dry. Islay receives lots of compliments about her pannier carrying skills. 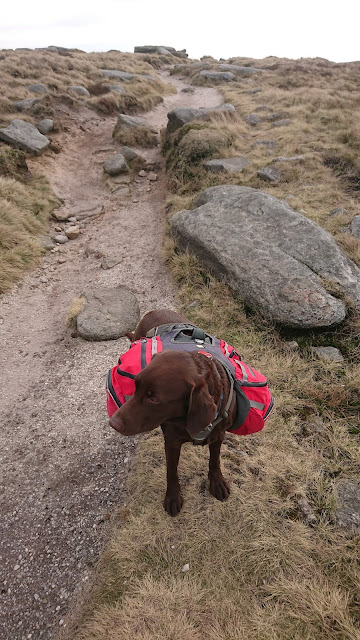 By lunchtime we're home. Coffee, cheese on toast, cake and chatter. Then, it's back to thoughts of coming days...