How it all began

It's late 2008. Following the passing of Chrissie's mum, she's been left a house to sell (Chrissie's my long-suffering wife).
When the house sells (this was to become a much repeated phrase). When the house sells, let's buy a caravan?
Ok.
Months pass.
When the house sells; perhaps we'd be better off with a motorhome?
Ok.
We begin researching motohomes and decide on the smallest kind of coachbuilt; basically a cab with a caravan type body on the back.
Gradually, for a number of reasons, we change this to what is called a "panel van conversion"; a motorhome, built inside the existing body of a commercial van.
And, by the time the house sells, some 2 years later, we've narrowed it down to a make and model.
We muse on the fact that, had the house sold much earlier, we'd have bought either a caravan or a motorhome that didn't really suit us. Maybe that 2 year wait was for the best.
So, at the end of September 2010, we pick up our beautiful new motorhome.

Here she is, on the drive. 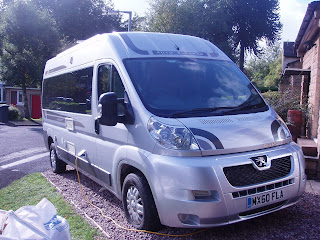 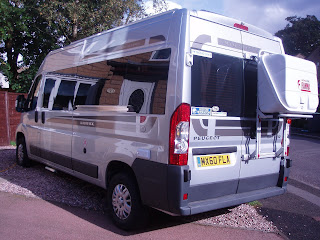 ﻿She's an Auto-Sleepers Warwick, formerly known as a Warwick Duo but, sometime during 2010, Auto-Sleepers deleted the original Warwick and renamed the Duo as the Warwick. That sounds as clear as mud! In short, this model has long, single bed sized sofas allowing use of two single beds or one king-sized double.
There were many reasons for our choice of van:
We really liked the look of panel van conversions.
We liked the idea of a relatively narrow vehicle.
We didn't want a white van.
We did want the option of single beds, primarily for comfortable lounging.
We liked the standard 25litre lpg tank; much cheaper than using bottles.
We liked the black, glass windows giving privacy and adding a sleeker look to the vehicle.
We liked the worktop space and the sink drainer; surprisingly, many similar vans are lacking in this area.
We were impressed with the list of standard equipment including a freeview TV, microwave and a full oven.
We wanted to be able to source a van as soon as funds allowed. So a larger manufacturer was more suitable than a smaller one. Many have waiting lists of six months or more and we felt that, with Auto-Sleepers, we stood a fair chance of finding one in stock somewhere. As it turned out, just 3 days after accepting an offer on the house, we went to the Cheshire Motorhome Show and Spinneys, the closest Auto-Sleeper dealer to our home, had not one but two in stock. Not only that, but they were happy to hold one for us until the house sale completed. We still feel indebted to them for this and it meant that, within a fews days of completion the van was on our drive.
Both the vans Spinneys had were fully specced with extras which meant ours came with alloy wheels, cab air-conditioning, cruise control and a reversing camera. We had a Fiamma bike rack fitted and, onto that, a small Fiamma backbox. This was because we we were concerned that we might not have enough storage inside to accommodate our hillwalking gear and all the accoutrements surrounding our two dogs (Dixie, our boxer, and Tilly, our chocolate lab). We also had Spinneys fit an alarm and swivel seat bases for the cab seats. Even though it's a rear lounge van but we thought this would give us extra lounging space (we call it "the study"), separate from the main lounge.
The van's built on a long wheelbase Peugeot Boxer window van base, with a 2.2 litre turbo diesel engine and a 6 speed gearbox..
Posted by Geoff Crowther at 14:53