From one end to t'other; the planning begins

There ... I've said it and committed it to black and white type here. Now I'll HAVE to do it.
Here follows a few random bits 'n' pieces of planning I've done so far, in no particular order and, right now, not necessarily in any order of importance.

I'll be riding my new Thorn Sherpa, which I ain't got yet. It's due to be born down at Thorn Cycles in Bridgwater, Somerset, next week sometime and I'm hoping to collect it in the first week in November. More details when it arrives, but, in the meantime, here's a photo of the same model belonging to a lady called Jackie who's, like me, on the CycleChat forum (thanks Jackie). Mine'll be red too. 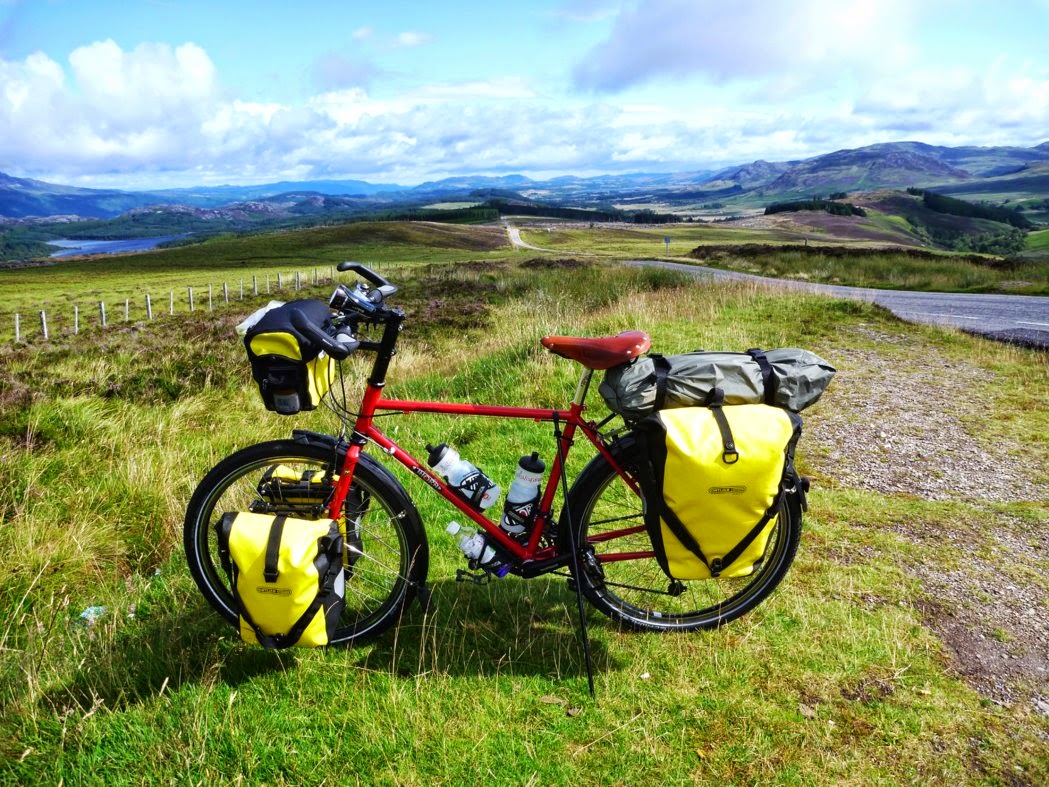 Jackie's bike's pictured, coincidentally, during her own End to End ride this August.

I'll be camping, primarily cos I'm tight-fisted but also, I like camping with a bike; it gives a feeling of independence and there's no need to plan accommodation so no deadline for how far you travel each day.

For the route, I've bought this book. 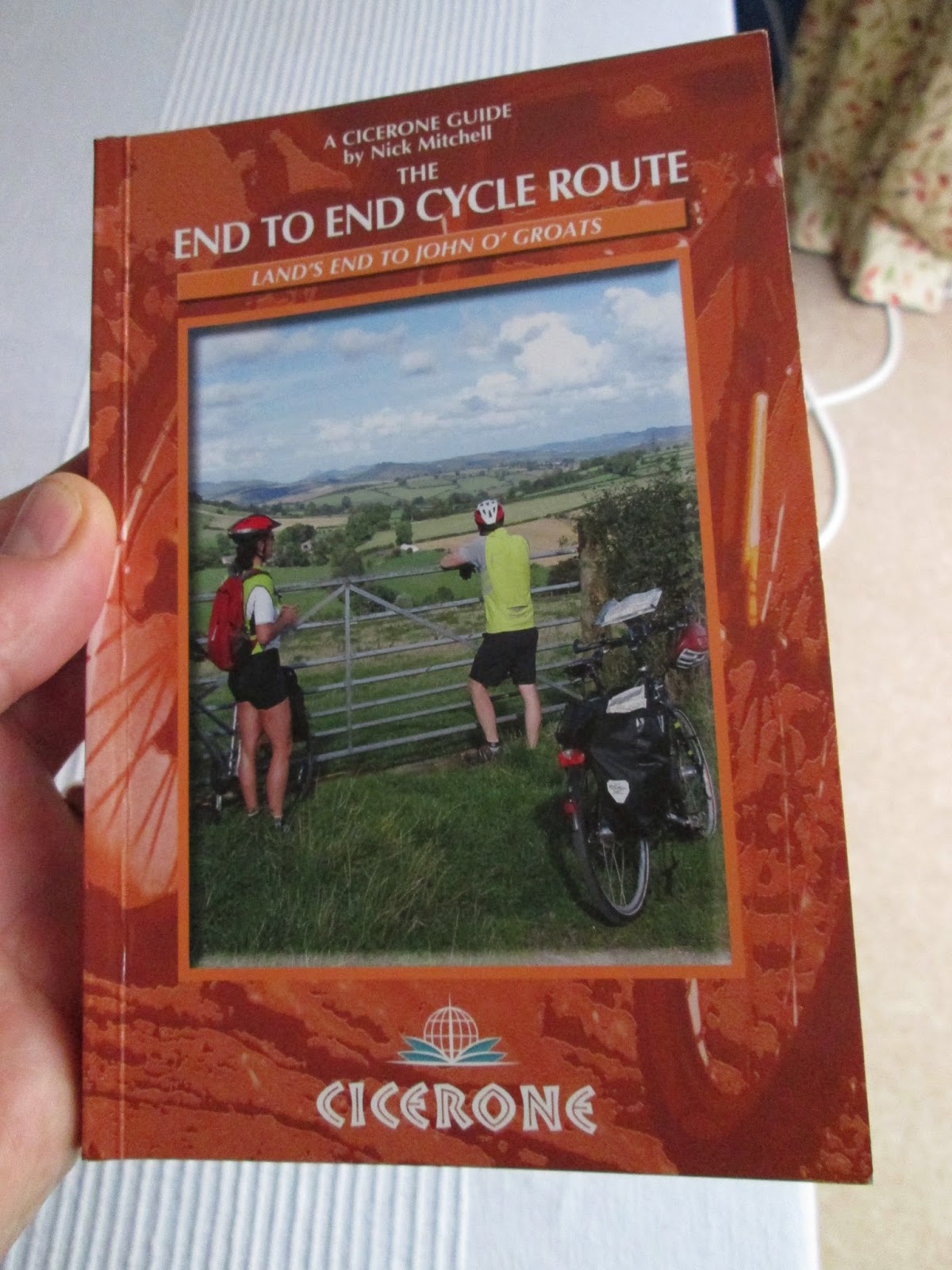 This'll give me a starting point for a route. There is no fixed route but the one chosen by Nick Mitchell claims to use quiet roads and cycleways as much as possible, so looks appealing, and if I do use his route it means I can get by with my satnav and this book, since it contains all necessary maps and directions. The distance is around 1000 miles; haven't yet found the exact mileage in the book.

The date's on our year planner, starting at the beginning of May 2015 and allowing the whole month. I'm hoping this'll mean reasonable weather BEFORE the Scottish midges arrive. Nick Mitchell says 14 days but that's not taking into account the 20kg or so of luggage I'll be carrying for camping and ... what's the rush? I want to enjoy the journey. I'll know how long it took when I get to John o'Groats.

While waiting for my new bike I've been shopping. The bike will have a dynamo front hub so I bought a very swanky, dynamo powered headlight from Germany, 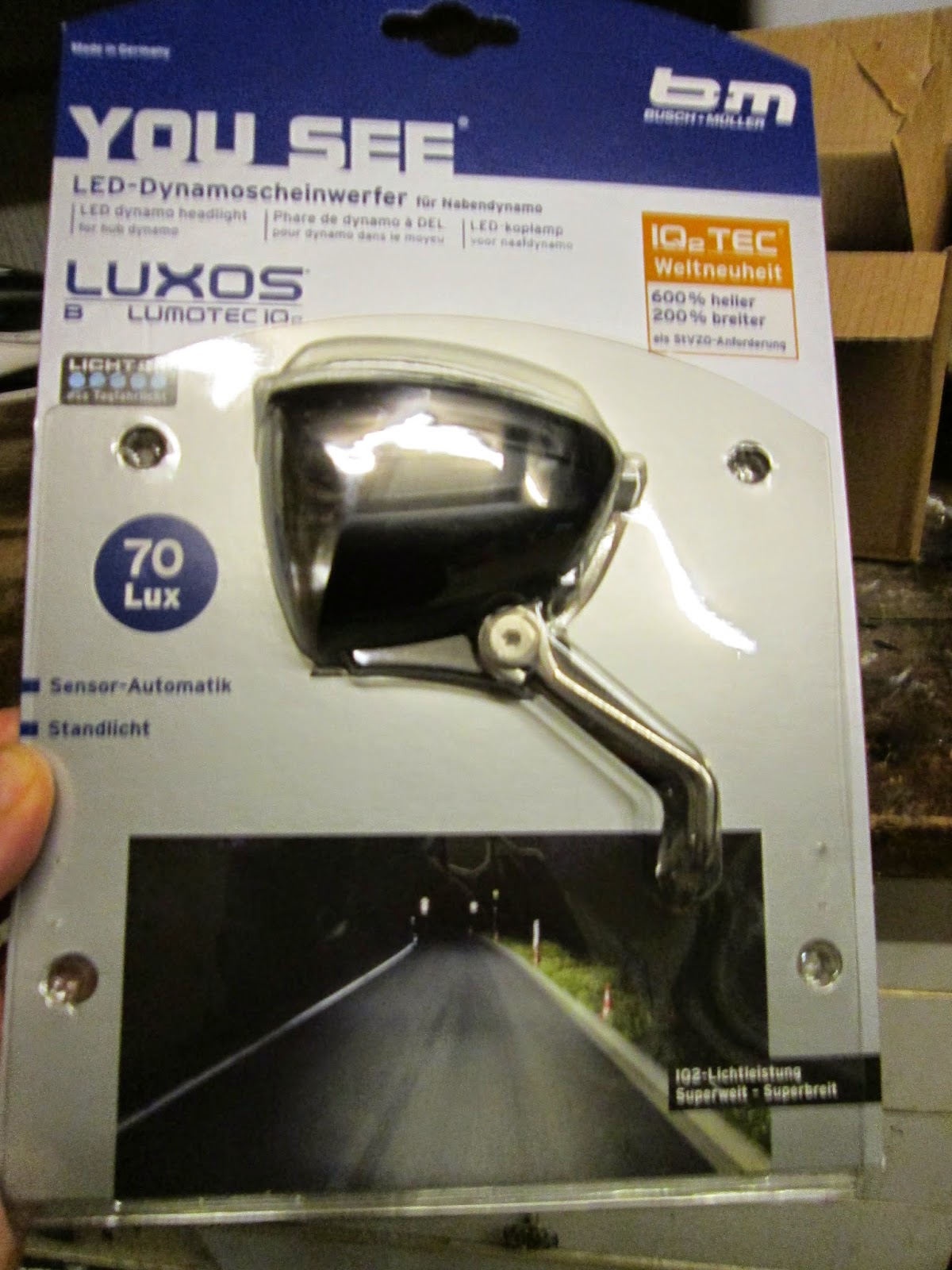 and a clever little gadget to provide power from the dynamo to top up the charge on my phone, satnav and Powergen cache battery (I hope). 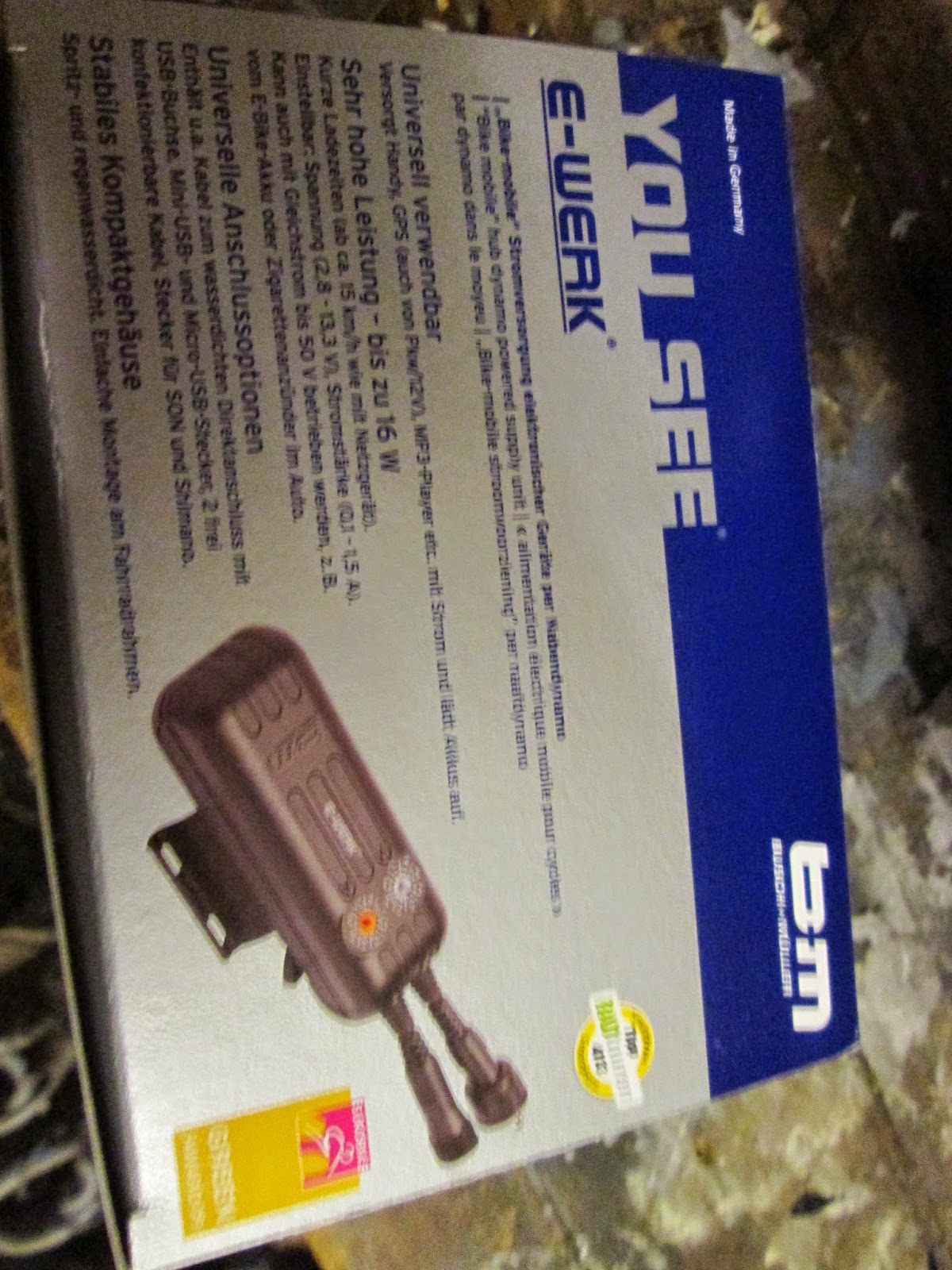 I turned this photo round by the way but the blogspot software's not co-operating ... sorry.

I've also got one o' these Click Stands from the US of A. Here it's folded, 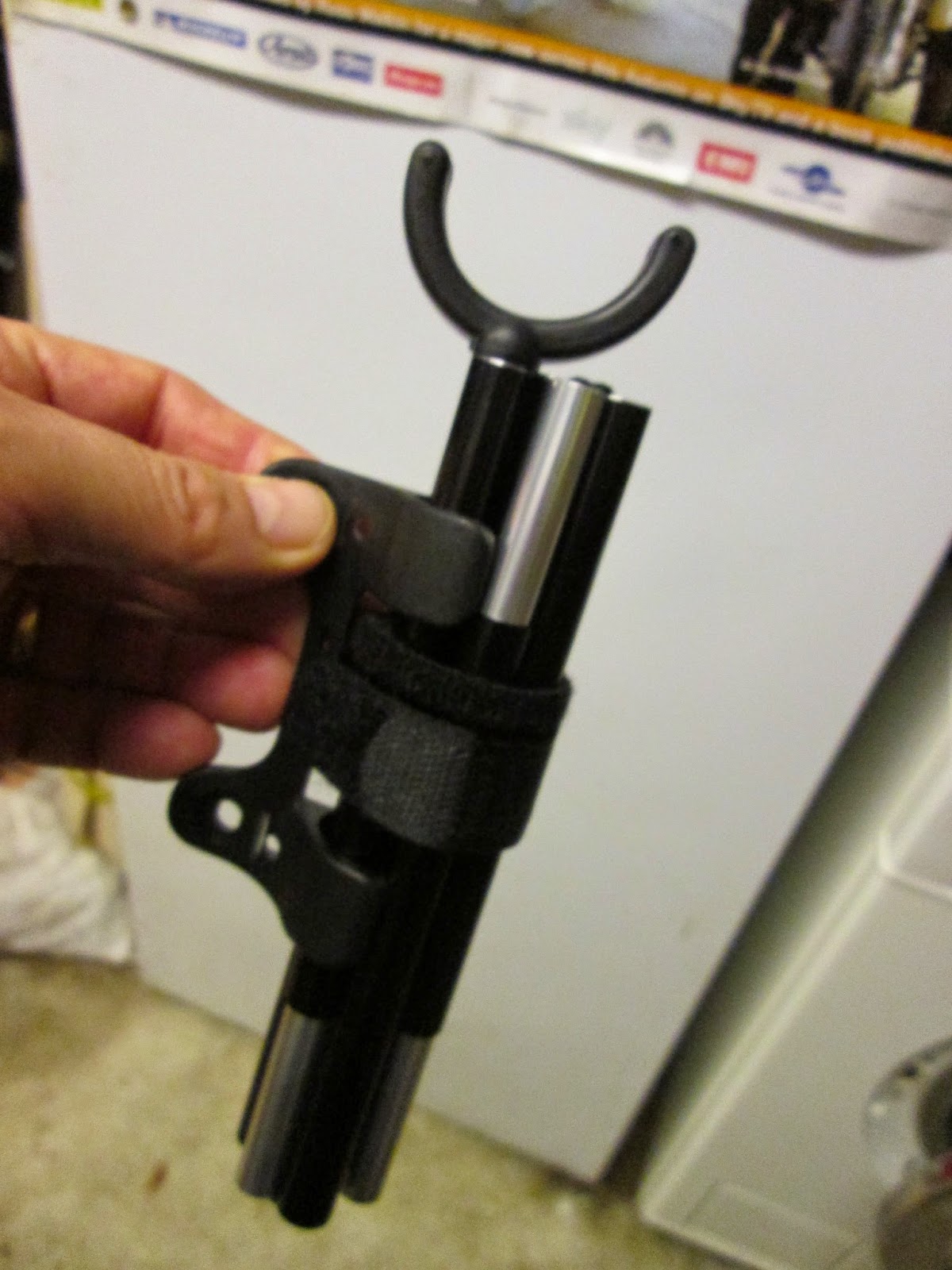 and here it's assembled and supporting my Cube road bike. 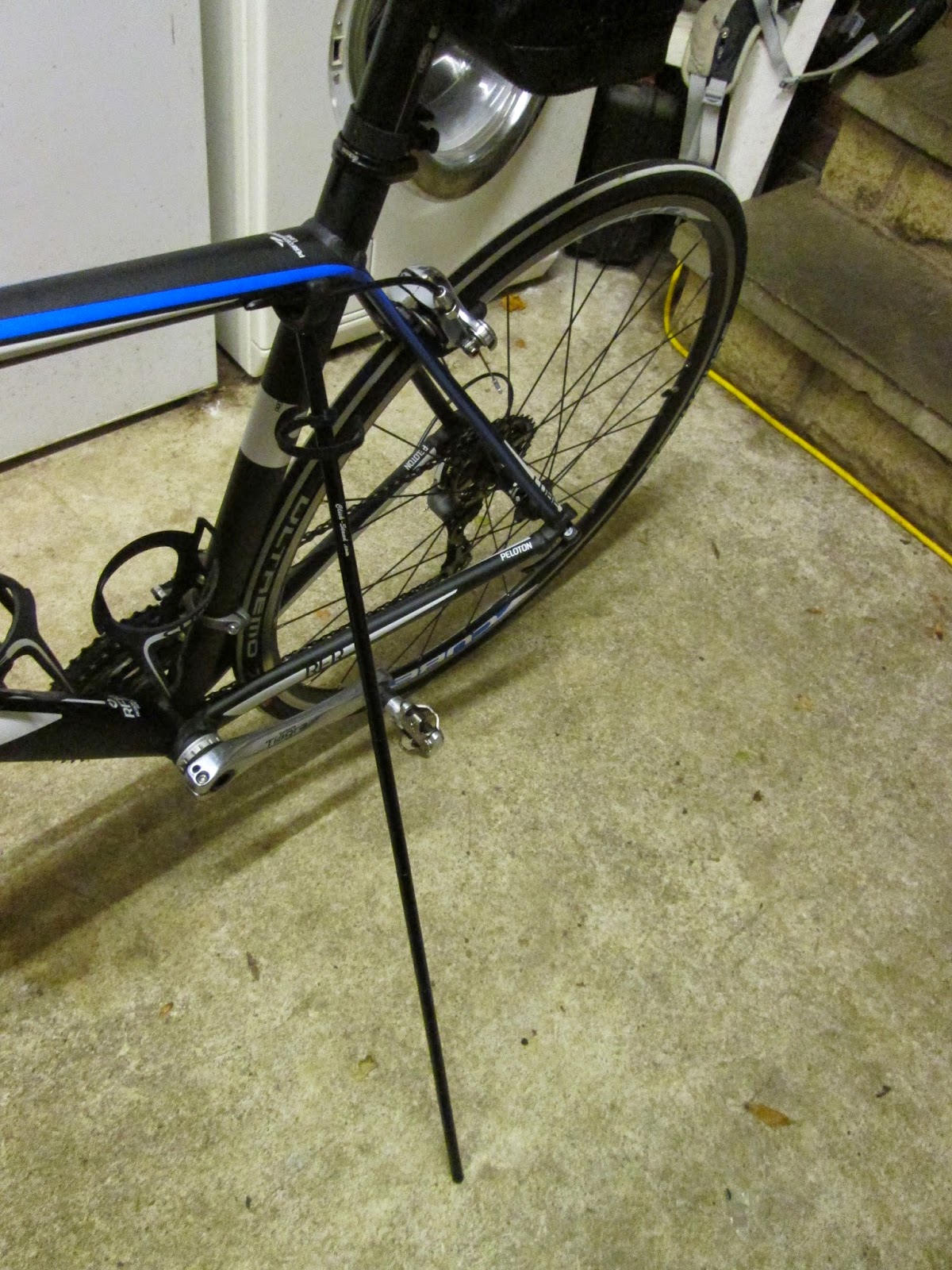 The route won't take me past home. I could alter it but I'm disinclined to stay at home along the way cos I think it'd alter the feel and flow of the journey.

I'm gonna journey to Lands End on my own, possibly by rail but, given the reported difficulties of booking a bike space on a train, my preference at the moment is one-way car hire. I know Enterprise have a branch in Penzance and understand they'll drop End to Enders at Lands End. It's a sad fact that hiring a car for one person is almost as cheap as the train journey; so much for green credentials eh? Incidentally, "End to End" is a frequently used phrase, as is "LEJOG". I prefer End to End; LEJOG sounds too French; I keep wanting to say Le JOG (as in French) not Lee JOG.

Chrissie plans to meet me with the motorhome (and the dogs) at John o' Groats, which'll be great and, hopefully, we can spend some time wandering and walking through the north west of Scotland once my journey's over.

Recent thoughts have turned to meals. On my cycling tours to date I've used freeze dried backpacking meals but they're expensive and not practical for a 3-4 week journey so I'm currently focusing on cooking simple meals with one pan and stove. Pasta, with a sauce chucked in when the pasta's cooked is straightforward but what else? Eggs? Will they survive in a pannier? Squeezy honey on bread sounds a good idea for breakfast, as does muesli, and I could enrich pasta meals with chorizo or the like, since it doesn't need cooking. Wonder if I can toast bread on my tiny stove? Any suggestions/ideas would be gratefully received.

I reckon that's it for now but I'll keep you up to date one here as planning progresses ... and when the gorgeous new bicycle arrives.