We're pitched in the van at Galliber Farm, near Long Marton, not far from Appleby in Westmorland where Islay was born. Dale's arrived just after us and Gordon's tent is already pitched. He's gone to t'pub for dinner. It's dark. Around 6:30pm. James and Mike are due around 10.

Our plan is, tomorrow, to walk up to Greg's Hut, a bothy close to the summit of Cross Fell along the old corpse road from Kirkland to Garrigill. Another in a continuing theme of Ghost Camps. Blame Chrissie...

By 10 we're all assembled in the van, sipping beverages.

Come morning we have a lazy start. 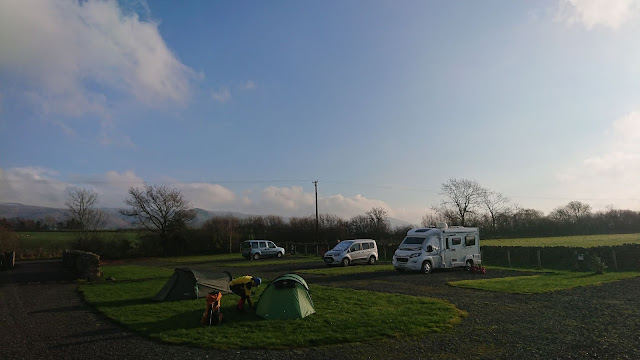 By 11am we're away, on a plod along the road towards Kirkland, where the bridleway up t'ill begins. 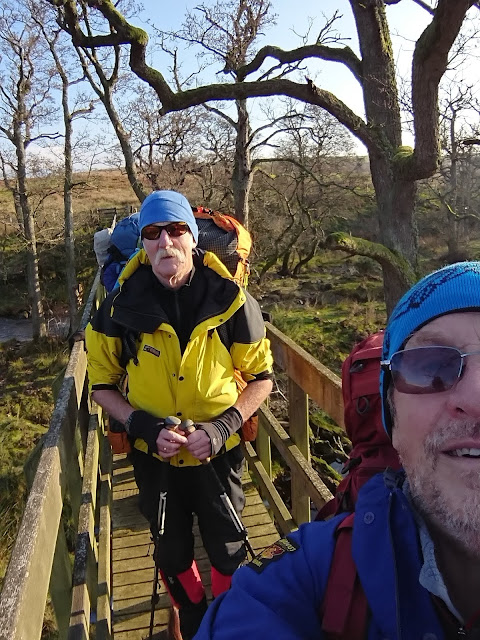 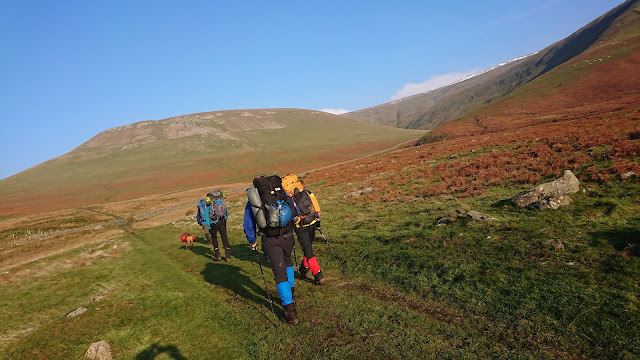 The sun is shining. We're each carrying 2kg of coal and plenty of insulation. We know there's bin snow on t'tops.We're hoping to socialise in the warmth of the hut before retiring to tents.

The track steepens. The sun disappears as we cross into the snow line. 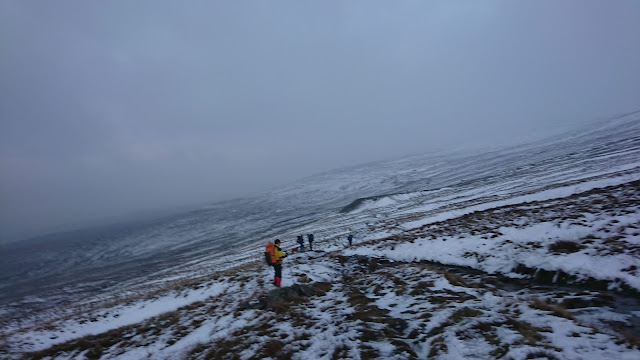 I'm suffering with the weight but chivvied along by the kindness and consideration of my friends. With hindsight, I may not have been the only one struggling but I'm the one who vocalises it. Never could keep my gob shut.

In time, the hut appears as a welcome sight in the gloom. 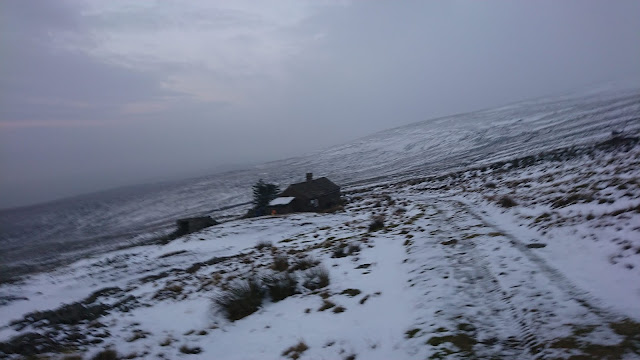 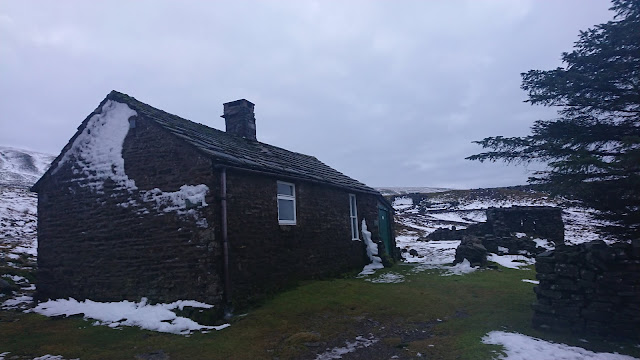 As soon as we're inside, James sets to work on the stove and the fire begins to crackle. 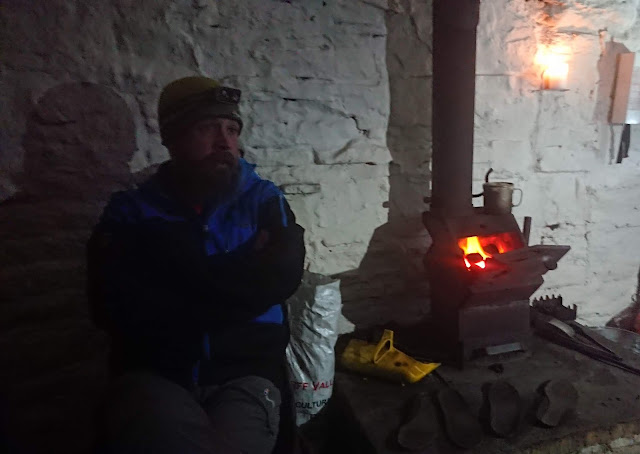 No-one can work up any enthusiasm for tent erection. The ground around is not the best anyway. Instead, we organise our kit, lay out mats and sleeping bags on the sleeping platform and begin making brews.

First out of our sacs are the dogs' Woof Bags. As soon as they see them on the end of the platform they're in and snuggled down. It's been a tough walk up for them both, carrying their panniers.

In contrast to the final slog to the hut, the atmosphere is cosy and convivial and we spend the evening laughing, eating and supping whisky...and some vodka we found left on a shelf.

Plenty of spirits see us through the evening... 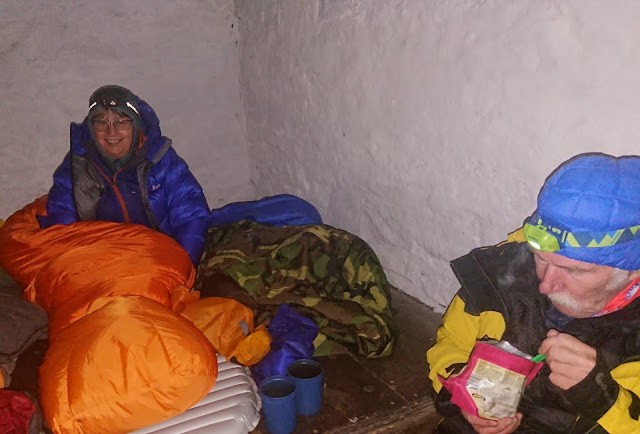 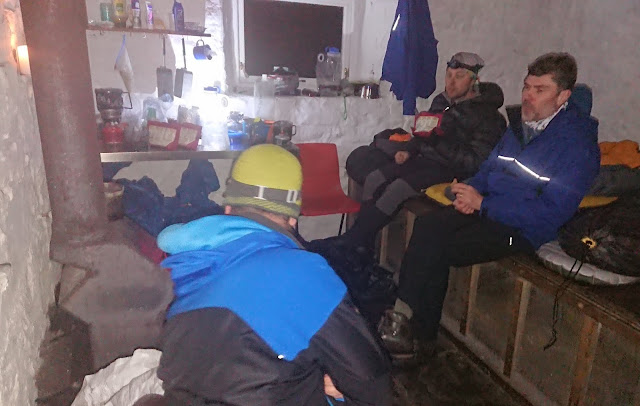 Part way through the evening we hear someone at the door. It's a young bikepacker, Sam, en route from Peebles to Penrith. We welcome him in, make sure there's space for him to sleep too and he's soon attempting to dry very wet shoes by the stove.

It's a truly memorable evening, spent in great company. Strangely it's the first night I've spent in a bothy. I frequently camp near them but prefer my tent. I've always said if I was ever in a group I'd consider sleeping in one...and here we are. It's a first too for Pebbles and Islay and we're proud of how settled they are in their beds. They bark when Sam enters, but only briefly. They're soon snuggled down again.

The night is not so cold. We all seem to sleep quite well, given the inevitable toilet excursions through the night. Pebbles' snoring is the source of much hilarity (we're well used to it) but it seems she has a rival in one member of our group.

Morning is dank and gloomy again. 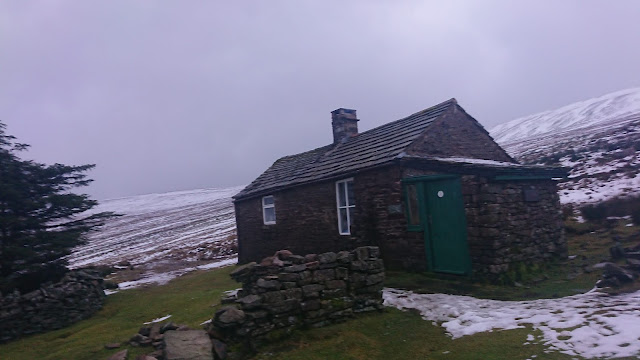 We breakfast around a freshly lit stove before packing.

James, Mike and Gordon want to head up to the summit of Cross Fell and descend by a different route. With the dogs we're happy to avoid more snow so head down by our ascent route. Dale joins us. 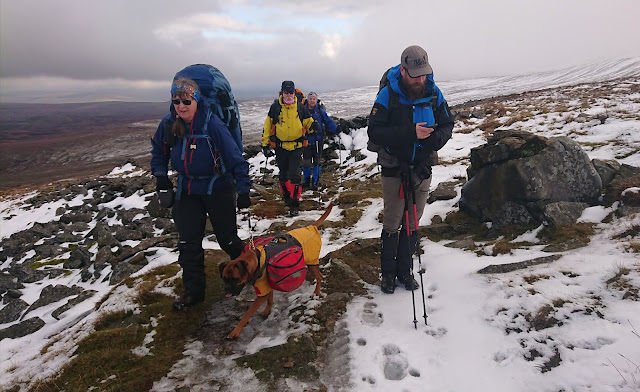 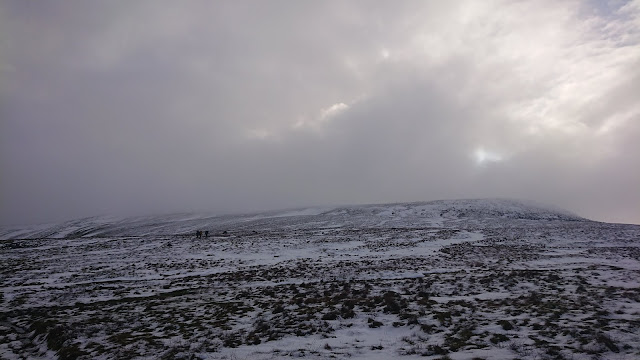 As we stop for lunch, Islay poses proudly with her panniers. 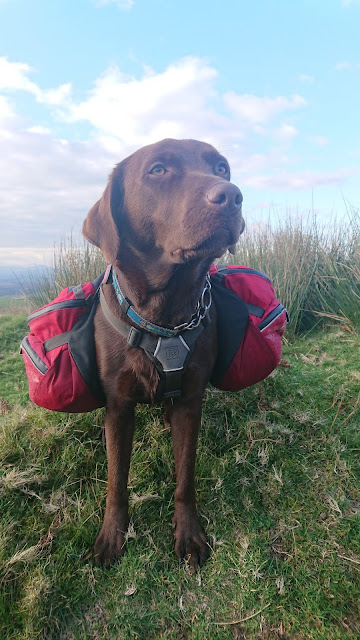 And after a long trudge along the road we're back at the site shortly before the rest of our group.

The evening's spent consuming chilli, beer and cake, interspersed with daft attempts at humour. A damn fine end to a short trip.

Friends are worth more than gold... 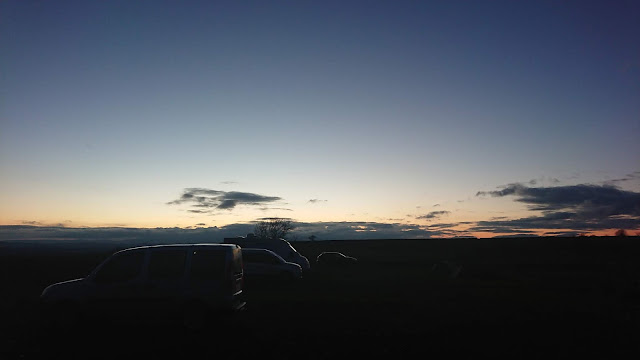