All I did was send my pal Chris a text to say we were back from France, We're cycling the Way of the Roses in a coupla weeks and I just needed to catch up with 'im.

"Off to the Lakes on a lightweight backpack tomorrow. Leaving about 4, after work. Come if you like," ... the unexpected response. 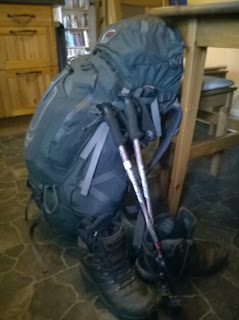 Chris arrives about 4.15 and we're off, up the M6 bound for Keswick. Dump the car and about 8:30 we're away, down the western edge of Derwent Water. We camp towards the south of the Lake, away from the path, close to the water's edge and near a conveniently placed bench. Soon sat on the bench, preparing a late dinner, we're puttin' the world to rights and staring at a faint green glow in the horizon's dip twixt Skiddaw an' Bencathra; the aurora borealis. Very faint mind, not worthy of a pic. Just like the hint Chrissie an' I got in Northumberland earlier this year.

Up early, our bench serves up a gourmet breakfast of blueberry porridge and coffee. Chris messes about, in a manly, backcountry way, with twigs and his lightweight meths an' whatever titanium cooking device while I watch in admiration, sipping my coffee ... which'd been ready hours ago.

It's a beautiful morning. An unlikely October in the Lakes. 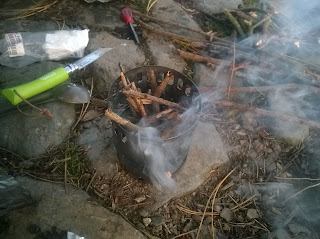 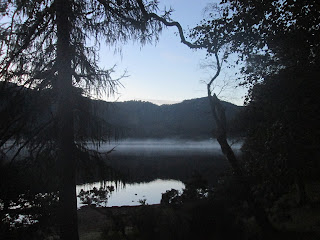 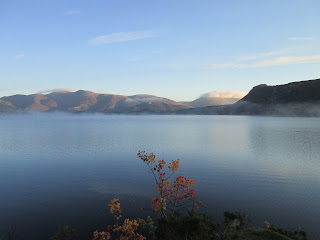 Soon packed up we're off. God knows where. I'm leaving it up to Chris; just tagging along, and he's even more indecisive than me. But it's a fine morning and a diverse range of subjects challenge our combined intellects. Who cares where we're going?

The cafe Chris is threatening me with in Seatoller is shut, so we sit, by the roadside, fueling up on trail mix and biscuits then away up to Styhead Tarn. Lunch along the way is taken by a pool of crystal clear water, prob'ly 20 feet deep; but a dip's for another day. 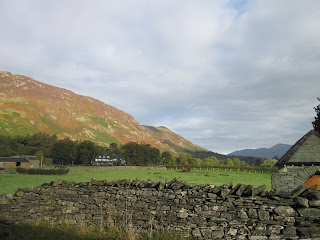 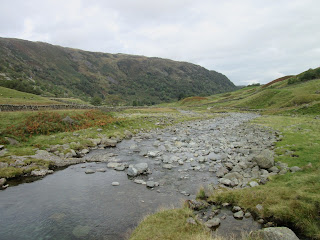 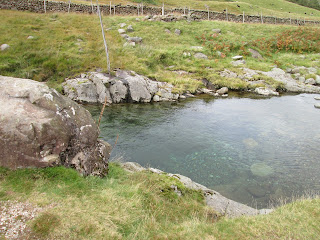 Reaching the head of pass we decide (sort of) on Angle Tarn as our next target; onward and upward. 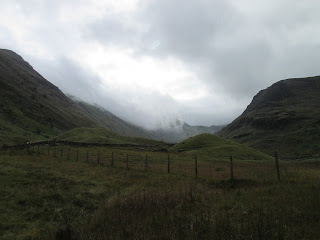 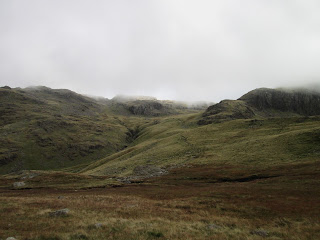 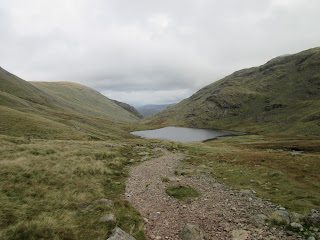 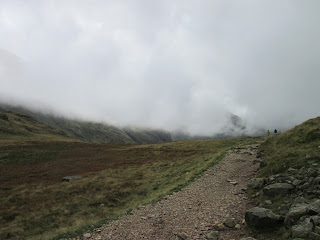 Above the tarn we take a longer break. My ankles feel the climbing. We ruminate on where to go from here but I'm tiring so, in deference to the old man of the group, Chris agrees to a descent into Langdale. 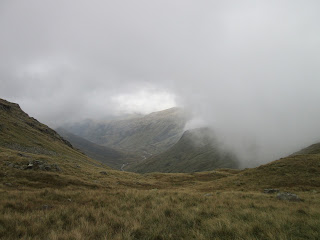 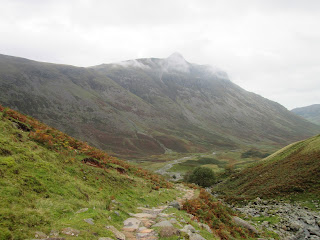 Arriving in the head of the valley shortly after 5pm and clocking a perfect wild camp before the first (or last) intake wall, we head for the comforts of the Old Dungeon Ghyll. I've not been here for years an' years but it's not changed ... apart from the prices. We down a coupla pints, contemplate buying dinner but, eventually decide against it and trudge back to our wild camp. The beer's cured my aching ankles ... astounding. 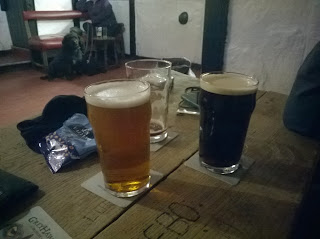 Dark now, we sit, preparing dinner on the footprint Chris brought with his bivvy bag as I mutter about the pointlessness, in my humble but considered opinion, of footprints. We "argue" in a good-natured way, stopping short of fisticuffs, before retiring; Chris to his breathable, nylon coffin, me to the comfort of the Enan, which is welcoming, despite Arctic Vole damage (see Chrissie's blog).

Like the first night, it's eerily calm and dry ... not the slightest hint of a breeze. Unusually for me, I sleep well, the beer, mileage and hills working their magic. But we're still both up early and Chris, amazingly, still allows me to sit on his (pointless) footprint. I munch "expedition breakfast" pretending to be an adventurer and sip filtered coffee while Chris stretches his meagre rations. He's hard is Chris. 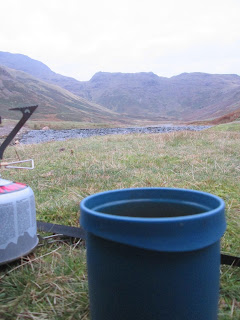 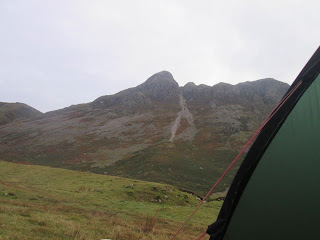 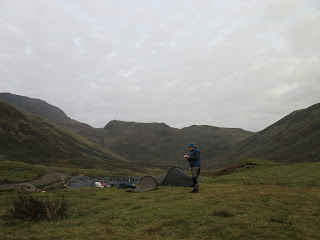 Packed up and off around 9am we shoot off down the valley to the gruelling ascent to Stickle Tarn (I'll jump, quickly past the sweat toil and effort I expended, hauling myself and sack up there). We snack at the top and I entertain Chris with the tale of a New Years Day attack on Jack's Rake with a dear friend, many moons ago, following a mad, overnight drive from Yorkshire, itself following a boozy night out! If you strain your eyes with the pics you'll find Chris, in blue, leaping ahead of me like some mountain goat. 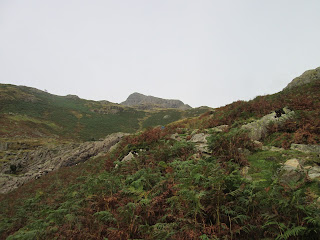 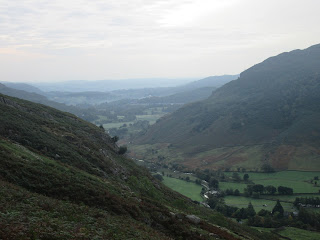 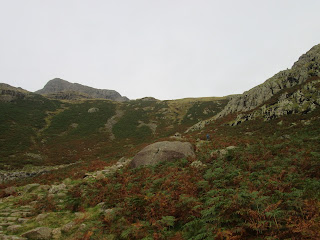 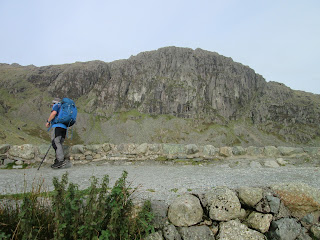 From here we turn our sights on a descent to Grasmere via Easdale Tarn. We become "temporarily misplaced" as some inconsiderate swine has gone before us and erased all traces of the path, clearly shown on our maps, from the ground. Undaunted, we plough on. 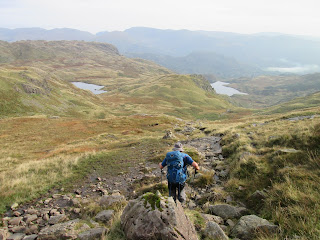 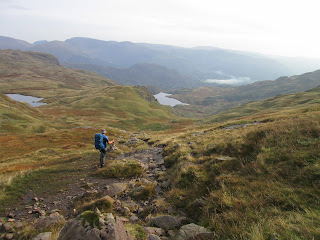 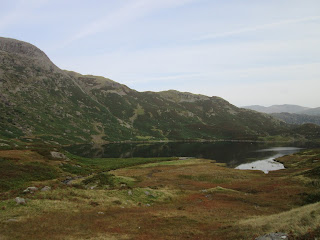 And we're done. Down in Grasmere we board a bus, for the SEVEN POUNDS AND SEVENTY PENCE ride to Keswick. Am I really so out of touch with prices these days? We wander through Keswick, pausing for cake and coffee, feeling like rufty, tufty adventurers, back to the car, the M6 and home.

Next up, The Way of the Roses, a cycle camping adventure across England, from Morecambe to Bridlington. (Yorkshire WILL win, by the way.)