A cycle tour right across England's green and pleasant land

It was my friend Chris's idea, but he was good (or daft) enough to invite me along. The Way of the Roses; a 170 mile coast to coast cycle route from Morecambe to Bridlington (in God's own county), camping along the way. This was August, but the trip was proposed for the end of October. In the meantime Chrissie and I an' the hounds were off to Brittany for a month or so (life's hard).

By the time the date arrived, neither myself nor Chris had actually been on a bike for weeks but, never mind. So, with bicycles on the back of the Scooby, we were off to Morecambe. 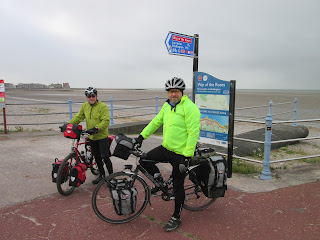 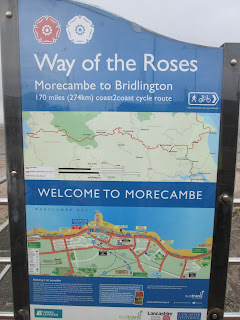 Chrissie waved us off and a nearby Morrisons provided necessary supplies and a cash machine, as well as these comical birds. 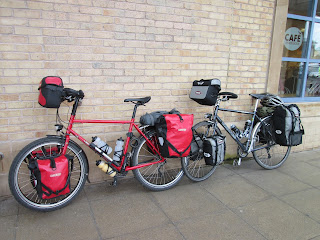 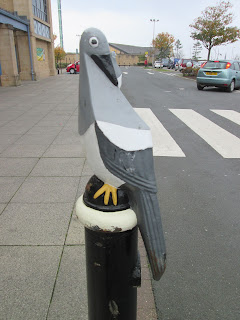 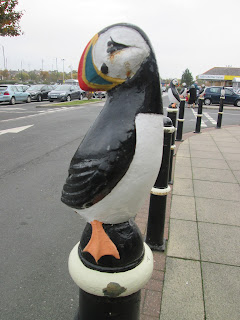 We left the resort around 11am, aiming to cycle some 40 miles. The route along the Lune valley and around the northern edge of the Forest of Bowland made for easy riding. The weather was fine and, grabbing a quick, takeaway coffee from a store in Wray we enjoyed the quiet, undulating roads. 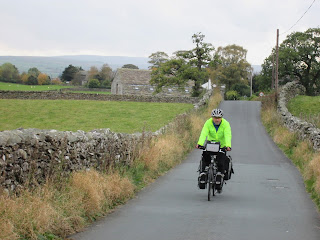 The route takes in Settle, but since there was no convenient campsite we, instead, took backroads up towards Malham Tarn and a planned wild camp. We missed the "hardest climb of the entire route" and substituted our own, equally difficult ascent, both resorting to pushing the heavily laden bikes.

Arriving on the moor near the tarn in darkness, we took water from a stream and pushed on into the gloom to find a pitch for our tiny tents. It was a calm night, the forecast rain arriving as we awoke, forcing us to breakfast in our shelters, before packing quickly in the drizzly murk. 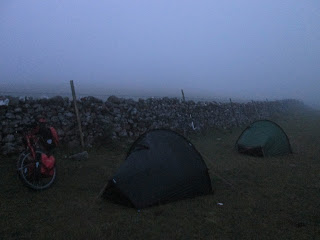 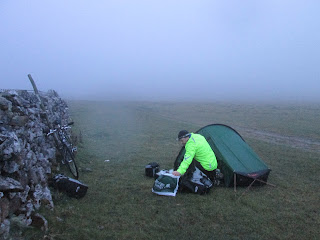 Dropping quickly into Malham we jettisoned rubbish in a handy bin ... 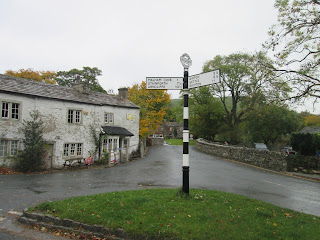 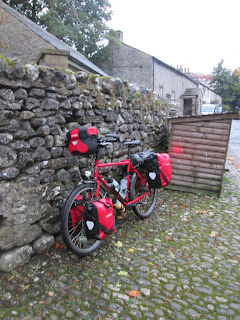 ... before heading off to regain the official route at Airton, where I delighted Chris with tales of early Rohan outdoor kit as we passed the Old School House where the fledgling company was based in the 1980s. 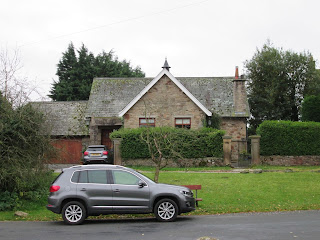 It's indicative of the somewhat hilly nature of the rest of the route that day, that I took no photos as we climbed first over the moors to the highest point of the tour (1325' Keld Houses) then rattled down the, three mile long, notorious descent of Greenhow Hill into Pateley Bridge. We lunched at the cafe in the cattle market, opting for the namby-pamby, vegetarian-option quiche as farmers on the next table tucked into Desperate Dan sized portions of cow pie.

A tough, twisting, turning ascent past Brimham rocks eventually led us to the cycle route through the Fountains Abbey estate. 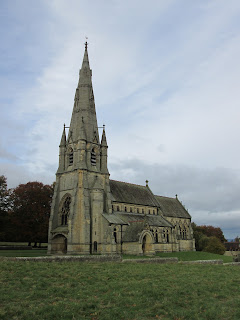 From there we bimbled easily into Ripon; our next overnight stop, another 40 miles into the journey.

On the first day Chris had lost patience with his new, Aldi bike computer (it's fair to say I'm a big fan of Aldi cycling kit) and resolved to replace it as soon as we found a bike shop. With that in mind, Chris led me on a delightful tour of Ripon, searching diligently for the bike shop referred to on our Sustrans map. It was such fun ... And on finding the shop, with a wide selection of computers, Chris decided not to buy one after all. Never mind ... I now have an intimate knowledge of Ripon's shopping district.

We finally arrived at our campsite on the outskirts of the town, now in sunshine. Tents up, coffee was soon on the way in our little haven amongst the caravans of the Caravan Club's Teesdale District Association, who were so welcoming that not one of 'em spoke to us ... clearly correctly having identified us as riff-raff. 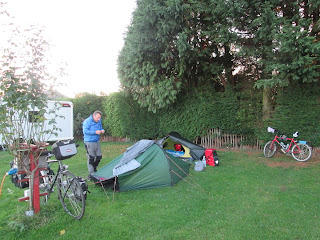 Eschewing the delights of the, somewhat grotty, showers, we marched off, filthy, to wine and dine (well, beer and dine actually) in the Unicorn Inn in Ripon. And, suitably fed and watered (beered actually) we enjoyed a quiet night, emerging to a cool but sunny morning.

We planned to cycle 50 miles on the third day; a good distance for me, on a laden touring bike, but it was to be fairly flat. We passed stone megaliths outside Boroughbridge ... 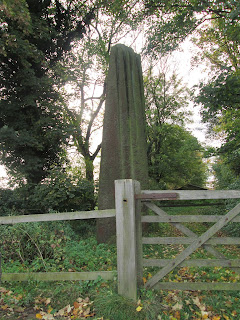 ... and tucked into a scrumptious second breakfast (of the full English variety) at the cafe by the lock at Linton on Ouse. Deeelicious! 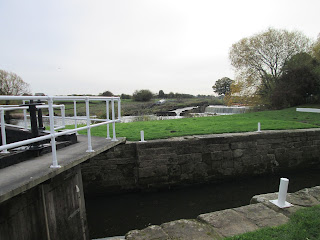 Leaving the cafe, it wasn't too long before we were scooting along the riverside cycleway into York, surely one of the most bicycle-friendly cities in England, where we struggled to make progress through the shambling hordes of tourists. We did find time though for Chris to enjoy a medievel loo experience in the stone-built splendour of Bootham Gate, for the princely sum of FORTY PENCE! Needless to say, being born and bred in Yorkshire, I held on 'til we reached a Morrisons again ... where I peed for nowt!

We paused for piccies by the magnificent minster ... 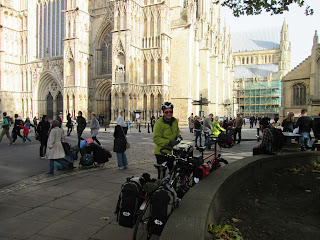 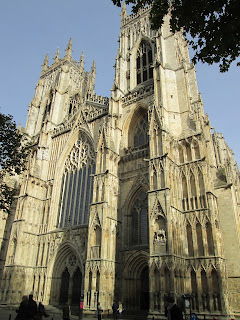 ... then wended our way through the suburbs, out into open countryside again. Particularly pleasant was a short section of off-roady stuff on the way to Stamford Bridge, where we lingered over coffee and cake in a cafe, contemplating the Norman conquest, battles and the like. 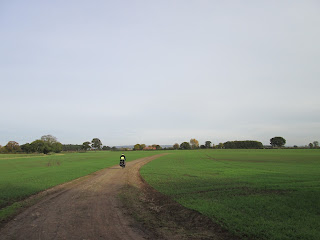 The final ten miles to Pocklington and out to our campsite for the night were tougher than expected, both of us feeling the strain on tiring knees. The final climb of the day saw me cussing and grumbling such that Chris thought me about to explode, especially when we failed to find the only campsite for miles around. Thankfully I'd noted their phone number, and a quick call resolved the matter and we were soon pitched in a superb spot on the lawn outside the impressive farmhouse. "Call it a fiver ..." the response when I offered payment. 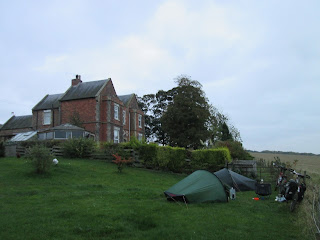 It was a cool evening again and we each lingered in our tents, cooking, snoozing, listening the radio and pondering life, the universe and everything.

Our final day dawned; forty miles left. Setting off uphill my left knee decided it didn't like cycling any more. But I chivvied it along and Chris quietly endured my grumbling as we attacked the, penultimate climb of our journey along a beautiful, dry valley. The top of the hill came quickly though and silly banter took my mind off the knee. By the time I next thought about it, the pain had all but gone.

We stopped for coffee and bacon butties in Hutton Cranswick, then made for Driffield. 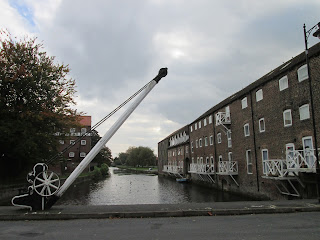 The end was now, metaphorically if not literally, in sight. We lunched in the old doorway of the church in Burton Agnes before tackling a short climb and the final nine miles into Bridlington. 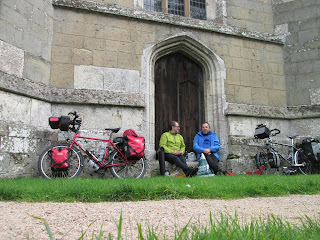 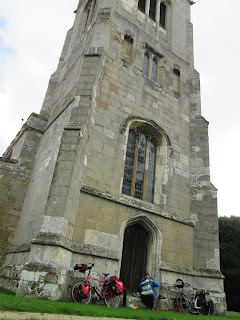 After a seemingly endless ride through suburbs, we eventually hit the coast in glorious sunshine. Riding along the promenade we found the sign marking the end (or beginning) of the route and took the inevitable snaps of each other. 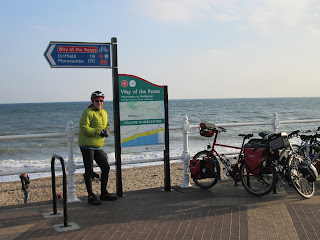 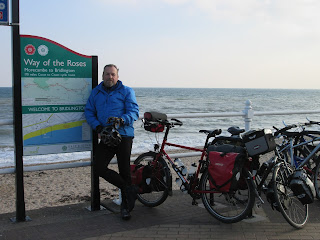 And that was that!

We gobbled coffee and cake ... again ... in a handy caff, quietly awaiting the arrival of Chrissie and the Scooby for our ride back home, pausing only for excellent fish'n'chips along the way. Big thanks to Chrissie for taking two days out of her busy retirement schedule to ferry us to the start and back from Brid.

It'd been a great ride, along some really enjoyably quiet roads, through pleasing countryside, showing the best of northern England's autumn loveliness.. Peace, quiet and good company; what more could you ask for.

Thanks Chris. Here's to the next time.