24 hours on Kinder; a backpack plus disjointed thoughts and ramblings

I need to try the new tent, our third this year! Plus a proper test of new boots AND a new stove.

Chrissie drops us in Hope (that's Hope in Derbyshire not hope as in "... springs eternal") and we amble off up the road towards Edale, striking right after Townhead Bridge and on up the course of the Roman road to Hope Cross. It's looking seriously gloomy. Tilly's sporting her Ruffwear panniers. 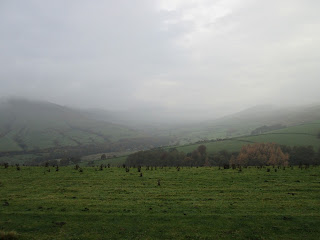 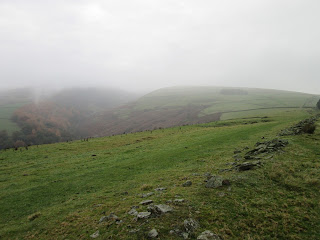 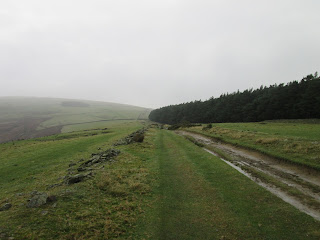 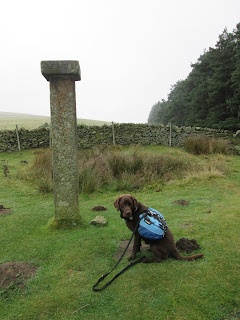 I love my dog. Some of you will know, earlier this year I thought her walking days were over but here she is, three drugs a day but living life to the full again. The vet and her orthopedic surgeon say, "keep exercising her," so we do. She only has light, bulky stuff in her bags; warm coat for sleeping, bowl, towels, but she just loves it when I strap the panniers on. We're off on another adventure!

So we're away up over Crookstone Hill ... 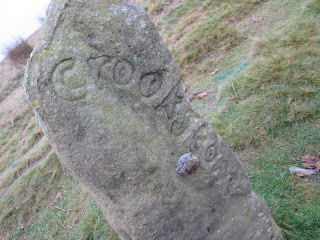 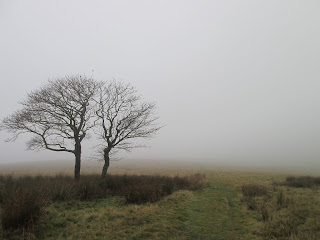 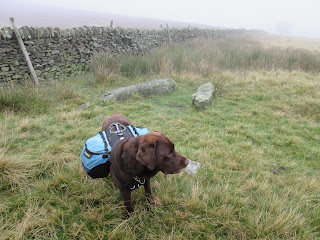 ... then up and up onto the far eastern edge path around Kinder's plateau; gloomy today but filled with atmosphere ... and murk.

We turn south west, following the edge path. Never been too familiar with this bit of Kinder so occasional glances at the Satmap help. Frustrated with specs which mist up if I leave them on, but can't see the screen without. Damn! Constantly retrieving them from pocket, wiping dry with hankie, only to be forced to return them as they cover with condensation again. 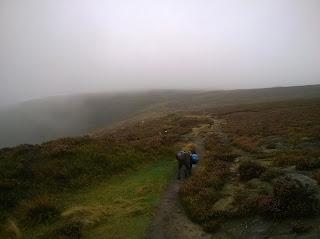 In the mist I notice the ground falling away to my right. Can't be right ... can it? Satmap reveals we're heading down the spur of Ringing Roger. Easy to cut across the moor and back onto the, proper, edge path.

Now approaching the top of Grindsbrook the mist clears a little and there's a semblance of a view. 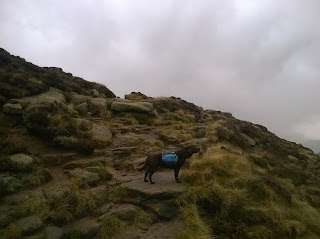 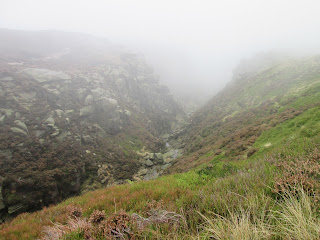 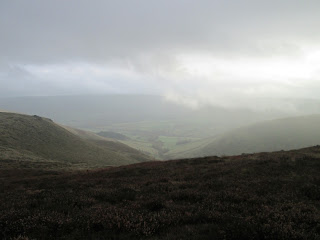 We cross Grindsbrook and pause for a snack. Tilly studiously guards my sac. 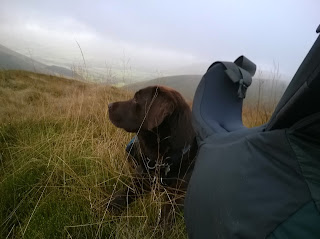 Reaching the ford across Crowden Brook we turn north, following the original route of the Pennine Way across the "featureless" plateau. In reality it's far from featureless but it's not the easiest of places to navigate. Recent reseeding by the wilderness police might be good environmentally but it's harder to follow the path now, thick grass blocking the way and masking old lines. The mini dams have made once-dry areas into, sometimes impenetrable, bogs. Tilly almost gets stuck a couple of times and I'm forced to make massive detours to follow a right-of-way. 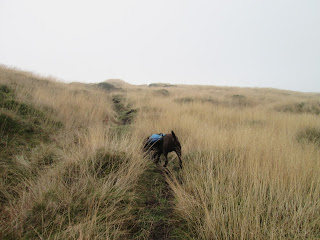 As we move on, my precious lab decides she's not done enough exercise, having walked over 9 miles at this point, and collects a weight training aid. 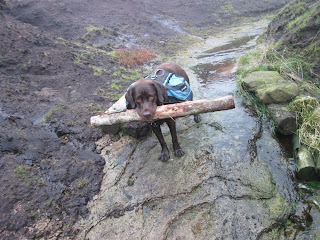 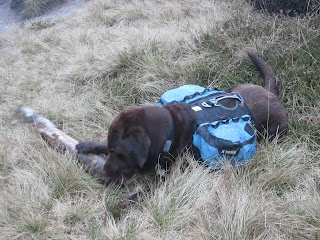 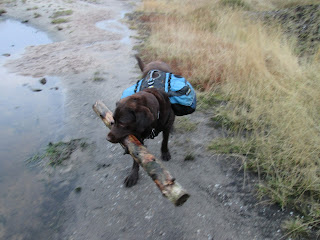 She's never been much of a one for small sticks.

We're heading for Kinder Gates, a feature very familiar from mountain rescue days, often being used as a RV point on searches across the plateau. I've been here many times in darkness ... in the foulest of weather. 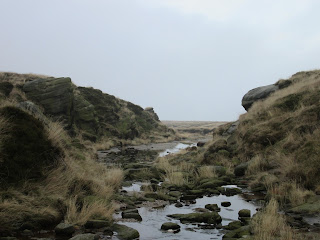 Today, it's 4.15pm and I stop to filter water from the shallow river before climbing up onto the moor again to find a likely place to camp. Pitching the tent, sorting mine and Tilly's sleeping mats, drying a wet, muddy labrador, we're inside ... cosy from the elements ... and it's dark. Headtorch out, brew on.

It was a gloomy evening, hence I took no photos of our latest new shelter. For completeness, here's one I took when we put it up on the front lawn a week or so back, fresh from delivery. 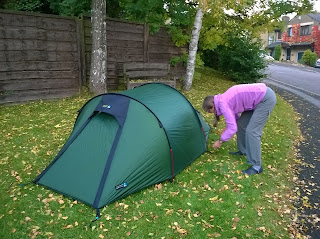 It's a Terra Nova, Polar Lite 2, Micro. Weighs around 1.9 - 2 kg (we've already added better pegs (MSR Groundhogs). It's two person, or, for us, one person plus dog, and will replace our much-loved Terra Nova Voyager. The Voyager is around the same weight but only 3 season, whereas the Polar Lite's a full, four season tent, designed for use in all weathers, including snow. It's also an outer-pitching first tent, which the Voyager isn't, so more practical for bad weather. It complements our other tents; a solo, 1.1 kg Hilleberg Enan and a three person 3.5 kg Terra Nova Polar Lite 3 (which we bought specifically for both of us plus two dogs). The Polar Lite 3 gives us a tent load of 1.75 ish kg each since we'd never use it solo, giving us a good selection of tents for all uses.

Back to the Polar Lite 2 Micro; we're planning on taking this to Sweden next summer, for a planned week in the arctic, following the first week of the Kungsleden (the King's Trail). Chrissie used it with Tilly last weekend, see here, so this is my turn. We're leaving the hounds with my daughter, Abi, in a couple of weeks and off up to the Howgills to try it together, just the two of us.

Being a classic tunnel tent, it's not self supporting, so, in my humble opinion, a degree of experience is required to erect it properly. Following Chrissie's jaunt we've already taken the silly, single guy off the front, which led to so much difficulty entering and exiting, especially with a 30 kg choccy lab, and replaced it with two guys, following the lines of the zips on each side of the door.

It's a little low for sitting up but my head touching the inner doesn't result in contact with the outer. The porch proved plenty big enough to cook in and me and Tills had plenty of room inside to stretch out. Once pitched nice and taut it presents a low, streamlined shape which should shrug off wind, rain and snow. It rained overnight and I managed to pack up inside the tent then remove the inner, which was totally dry and store that in a separate silnylon bag before dropping the flysheet. First impressions are good.

Next up, our new Jetboil Minimo. We've used MSR Pocket Rockets for years but technology's moved on and I was attracted to the idea of a more fuel-efficient stove. Our friend James has used one of these for a while now, so we took the plunge a week or so ago. This is the latest incarnation of the Jetboil series and boasts good simmering and a shallower, more user-friendly pan.

Again, for some inexplicable reason, I took no photos of the thing in use, so you'll have to make do with these "library" pics from home. I loved the design of the thing, even before using it. It packs up neatly, with cartridge support stored inside the lid and the burner assembly in a soft bag inside the pan. The handles fold out for use and are plastic covered metal, unlike the floppy fabric ones on earlier Jetboils. 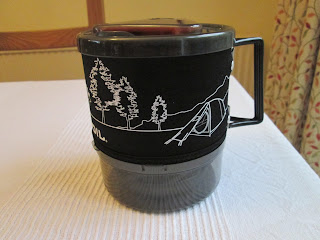 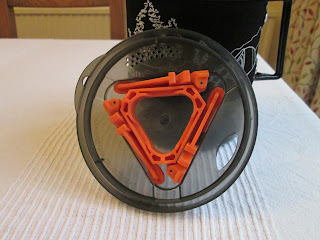 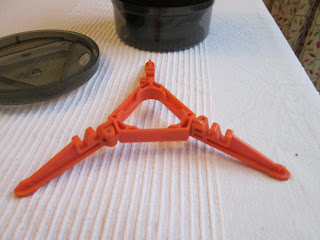 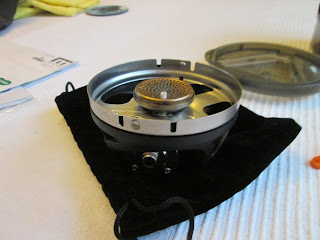 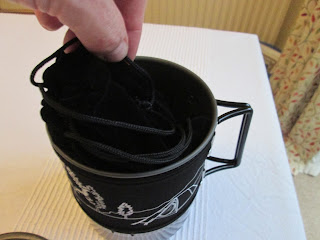 It's not only a thing of beauty, it works well. I cooked my own recipe pasta meal from scratch, allowing the pasta to cook in the insulated, lidded pot after boiling, without any extra heat, and it produced boiling water for coffee and a porridge breakfast fast and with aplomb. Excellent!

Next on the review front, my Altberg Tethera boots have been comfy, watertight and secure, straight from the box. Not impressed with the orange Superfeet footbeds though; they're giving me aching soles and balls (of feet, silly). Gonna swap them, probably for Sidas 3 Feet High footbeds.

Finally, Chrissie bought me some Sea to Summit Feathertop gaiters for my birthday. We've had some trouble finding gaiters recently that are a. high enough and b. have elastic right around the bottom to aid water repellence. These have both and are proving comfy and water resistant so far.

So, back to our small adventure.

We awake to rain. Packed up efficently inside our shelter we set off down the river. Tilly is reinvigorated after her night's sleep and is off, splashing through the water like a pup ... she'll be seven soon.

Today's walk, back home to Hayfield is a different experience to yesterday. I'm on all-too-familiar territory now. The western side of Kinder formed part of my patch when I was first a team member and latterly team leader of Kinder Mountain Rescue Team. I not only know the terrain intimately, every turn reveals another memory of a callout. I don't need to look at a map, never mind the Satmap ... not here.

Tilly and I blaze confidently through the mist and drizzle. Past the Downfall, across Red Brook then to here: 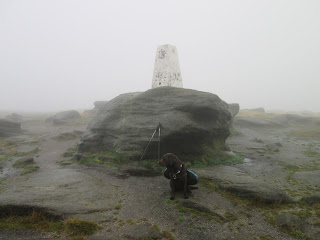 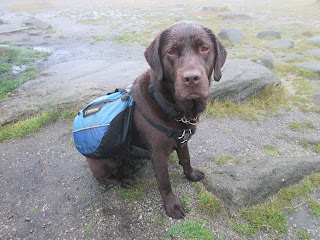 The trig point at Kinder Low looks eerie in the gloom. Tilly looks pensive but she's never happier than out in the hills, camping or wandering; a true mountain dog.

We turn from the trig and march north, down the spine of Kinderlow End. On one very misty night I brought a small hill party up here to aid two middle aged couples who were lost. They'd mistakenly turned towards Kinderlow End instead of the route via Swine's Back to Edale Cross. Reaching the descent off the end they were alarmed at its angle and panicked. This morning I can see why. Standing at the top of the stony staircase it appears to descend away into an abyss, there being only a few metres visibility. It might spook me, if I didn't know it so well. That night, me and another team member took the arms of the two ladies and coaxed them down into the darkness. Our surefootedness and reassurance seemed to work and the four were soon in the warmth of a waiting Land Rover.

I have many memories of mountain rescue but left that world over eight years ago. Petty internal politics finished it for me, and Chrissie. For the final seven years I was team leader and Chrissie one of my two deputy leaders. Our lives were governed by MR work. I was angry when I left but it's in the past. I don't regret my time with MR but I don't miss it. I feel I did my bit; over 27 years. Freed of constraints, we now lead more relaxed fulfilling lives. Time moves on.

Tilly hops down the steep descent like a mountain goat, leading me to a gate near the bottom. 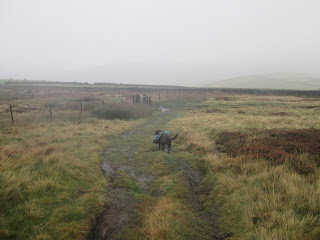 Visibilty is improved down here.

We gaze back at Kinderlow End; the top fading into the weather. 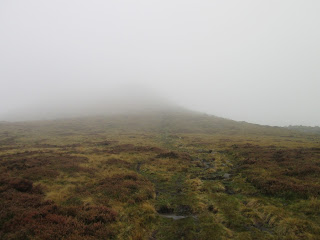 Then, we're off, down the track and back along the lanes to our home, in the village. Another night out, another couple of days of fun with my dog.