I was recently approached by Olight to see if I'd consider reviewing one of their products. I agreed, having first checked out some of their stuff on the internet. I was offered a small selection of their products and went with the H2R Nova since it seemed best suited to my needs as a hillwalker and backpacker and, thereby, of most interest to readers of this blog.

The H2R is a small handheld torch which comes with a headband, allowing its use as a headtorch.

Opening the package I first checked the weight of the torch. For backpacking I currently use a Black Diamond Spot headtorch; a now superseded model, which weighs 91g. The H2R weighs 102g on its own but 172g including the headband. 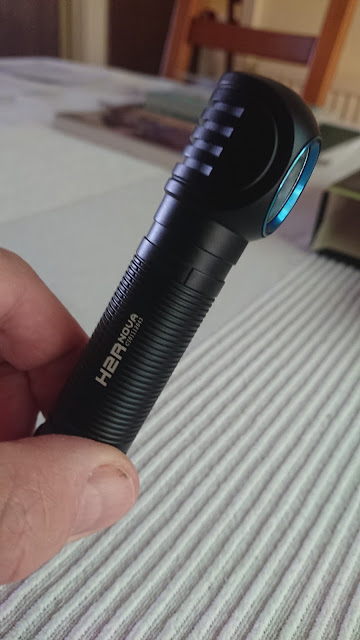 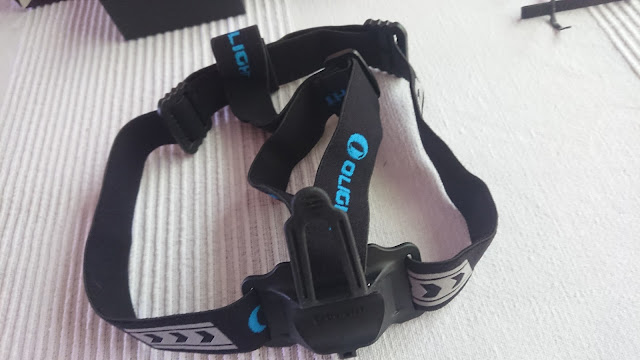 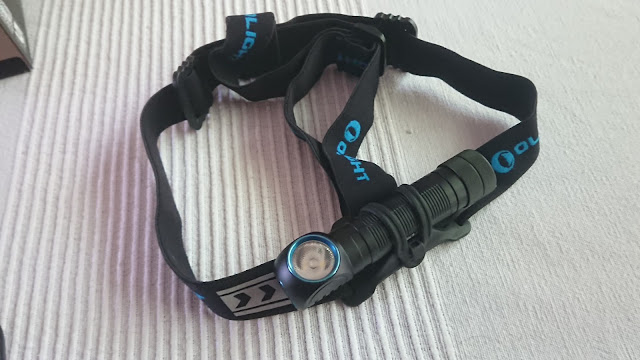 I confess to feeling a little sceptical given the weight and cost (it's widely available for around £70). However, further examination revealed it far exceeds the performance of the Spot. This may be an unfair comparison as will be seen, it felt valid though since the Spot is the torch I have most recent experience with.

On first look it's clear that the H2R is a well engineered piece of kit. It looks and feels high quality, having a machined metal body.

The model I'm reviewing is the Cool White version. it's also available as Neutral White which is slightly less powerful.

You can read the detailed spec of the H2R here on Olight's website. I'll try to give an overview of features and usage.

The torch is powered by a rechargeable battery and comes with a neat, USB charging lead with a magnetic connection to the torch. Spare batteries are available. 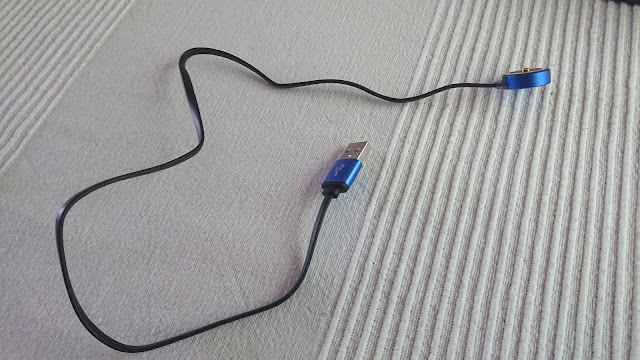 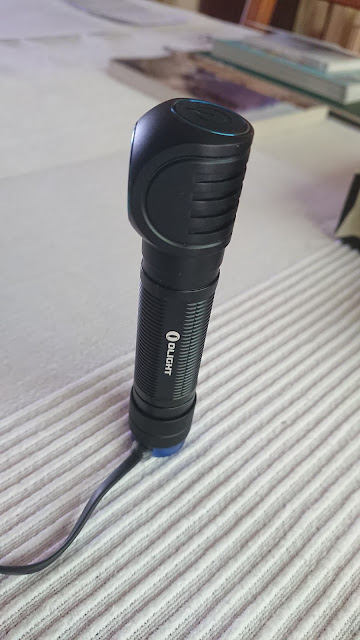 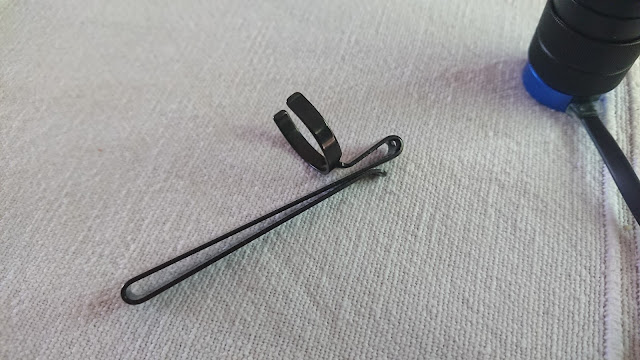 There are 5 light output settings ranging from Moon, giving out just 1 lumen, for use in darkness where only minimal light is needed, to Turbo which gives a staggering 2300 lumens. Don't point it at your eyes in this mode! Turbo can be enabled quickly by tapping the switch twice. Between Moon and Turbo are three default brightness settings which are easily accessed when you turn the light on. By the way, my Spot has a maximum output of 200 lumens.

An interesting feature is the SOS mode. Tapping the switch 3 times has the torch emitting 3 short, 3 long then 3 short flashes (morse code for SOS) until you turn it off. Clever. Hope I never need to use it.

Since being sent the torch I've taken it on two short motorhome trips and an overnight camp.

The torch proved more than capable on van trips for late night, pre-slumber wanders with the pups. One evening, Chrissie wore a Petzl Myo XP we had in the van and we found the least powerful of the three standard settings on the Olight gave more light than the most powerful on the Petzl.

On my overnight camp I was able to read easily on my Kindle app on my phone with the Olight on its Moon mode for background light. I took Islay out in the darkness, again using the lowest standard setting, ie not the Moon mode, and it was great.

After three modest uses the torch was fully recharged at home in less than an hour.

I've come to the conclusion that I'd be more than happy to walk off a hill in darkness with this lamp and will most likely use it for one and two night backpacking trips. Longer than this I'd prefer a battery lamp where I can easily replace the batteries. You could of course buy a spare battery pack for the Olight for around £18 and I may well consider doing this.

In summary, I didn't pay for this lamp but was given it by Olight for review. I'd never have considered buying one, primarily because I'd never heard of Olight. Having had time to try it I think it's a very high quality lamp with excellent performance and I'd definitely consider buying one next time I'm in the market. And if weight's an issue, take a look at their H1R Nova, which is substantially lighter yet still appears to have a very usable output.

Addendum: I subsequently had an accident with this torch, meaning I would not recommend it. It has the potential to cause serious damage and injury. Read more here