My beloved motorcycle (MBM) is a BMW R1200GS Adventure. Here's a pic: 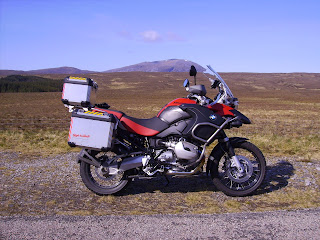 It was born in Germany in 2008 and came to live with me, fresh from the factory, on the 3rd of September that year. I'd not long bin retired and this was my retirement pressie to myself.

It was supplied by Rainbow Motorcycles of Rotherham (highly recommended) and is in magma red.

I specified all the bells and whistles. The dynamic package included ABS, automatic stability control and tyre pressure control. The premium package included extra lights, white indicators, chrome exhaust, on board computer, electronic suspension adjustment, pannier fastenings for aluminium cases, heated grips and enduro transmission (with a lower 1st gear). I also had an alarm, panniers and topcase and a front fender extender added by the dealer. The dealer also fitted my Garmin Zumo satellite navigator and my Autocom comms unit.

As I said, all the bells and whistles. In fact the only factory option I didn't have was enduro tyres, since, at that time, I had no plans to drive off tarmac in the immediate future. That was to change as you'll read later.

For those non-bikers out there, the 1200GS Adventure is the archetypal adventure motorbike, designed for real world travelling being equally at home cruising at high speeds on an autobahn as it is on a rough track through mountainous terrain. BMW created this type of bike back in the 80s with the first of their, now famous, GS range. GS stands for Geland Strasse, being German for, roughly, field and street.

I love my bike! 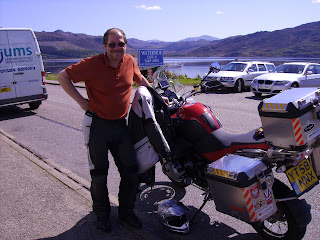 Update: In August 2016, after 8 years of ownership, I let the bike go. As we got more into motorhoming, backpacking and cycling I was using the bike less and less. As a consequence, and very importantly, my skill level was dropping off. I no longer felt as confident or safe. And I just wasn't using the thing. Sad, but, life goes on.