Howling in the Howgills or, will I ever trust our Hilleberg Enan again?

'Seemed like a good plan; a wild camp in every month of the year. I've managed it so far since October 2015 and now it's January 2016. My pal Chris was up for it so, leaving Chrissie puppy sitting, we're bashing up the M6 to Sedbergh on the eastern fringe of Cumbria. It's overcast but dry. We park the Scooby on the edge of a residential estate in the town and head off, with rucsacs, to a cafe.

Smatt's Duo cafe is just what we need. Coffee and a bacon butty set me up for the morning and, noting for the future that the cafe was "very dog friendly" we march off to the hills.

For those not in-the-know the Howgills are that enticing lump of hills you see, on your right, as you approach the (excellent) Westmorland Services on the M6. I've bin here before, but not for a long time.

Heading out of town on the narrow road towards the village of Tebay we soon find a footpath off to the right, up to the fells. We locate the bridleway heading NE past the little top of Winder and begin the steady, plodding ascent towards our first target of the Calf; at 676m, the highest point in these hills.

We're chattering, gossiping, puttin' the world to rights and it's not too long before we find ourselves on the little saddle of Rowantree Grains, chewing on a pork pie and supping welcome water. We've a fine view across the Lune valley and can pick out our return route for tomorrow over Bram Rigg. 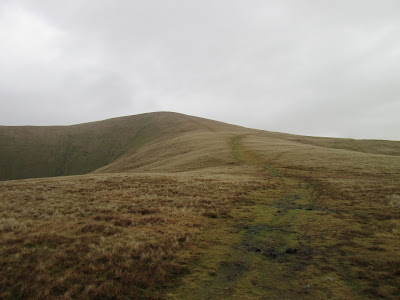 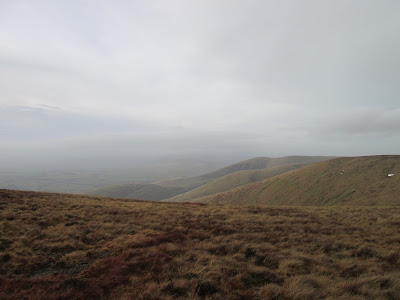 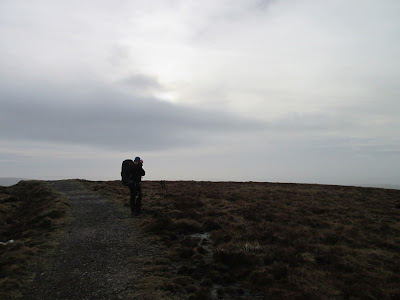 We crack on, acknowledging three guys with ridiculous military rucsacs that look like they contain enough each for a family of four; p'raps the family are actually IN the 'sacs? 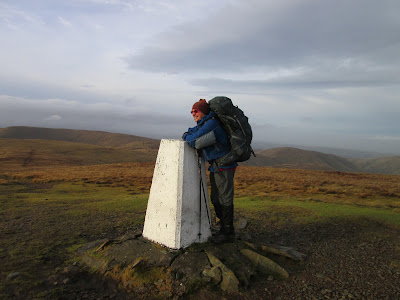 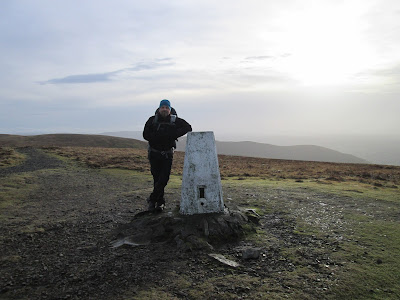 ... we turn right(ish) to drop into the head of Bowderdale, a beautiful valley with the meandering Bowderdale Beck twisting and turning (meandering, actually Geoff) its way towards the infant River Lune. 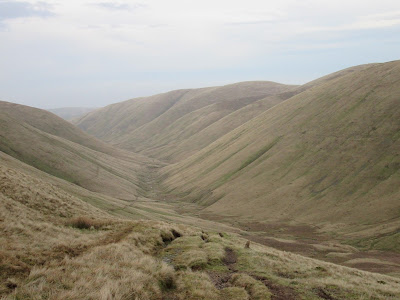 We wander down the side, wondering at the "intelligence" of whoever thought it a sound idea to ride a motorbike up here, making an awful mess of the path. Chris and I have both ridden off-road motorbikes but just can't see any logic in thrashing up here on one.

We aim to get as far down the valley as we can before camping somewhere on the flat ground near the river. The forecast for tonight and tomorrow is rain, rain and more rain so we don't want our return route to be any longer than necessary.

Eventually, we find a likely spot. The tents are up quick but I'm still filtering water when the rain hits, gentle at first. We're soon both hunkered down in our shelters, doors zipped up, contemplating, brewing, building a home for the night. There's no conversation between us; the wind's too noisy.

It's the first time I've erected our Hilleberg Enan in serious wind. No matter how hard I try, I can't get sufficient tension on the fabric on the windward end of the single pole tent. Chris has an Akto (on which the lighter Enan is based) and has the same problem. The Enan's a three season tent but it's warm, predictedly no cooler than 8 or 9C overnight, hence my choice for this trip instead of our heavier, four season shelter.

Nursing a coffee, I watch drips appear, grow and drop from the tunnel sleeve, landing on my, just dried, Paramo jacket and make a note to check the sealing there when I return home.

I cook inside, with just a slight opening from the top of the door to allow the escape of nasty gases from my Jetboil stove. "Look What We've Found" chilli, pitta bread, rice pudding, cheese and oatcakes make a fine repast before I lie, listening to the radio, sipping whisky from my flask. All this, to the accompaniment of crashing and banging of wind against silnylon as the tiny tent resists attack after attack from the elements.

Waking in the early hours I feel damp on the outside of my cosy down bag; putting it down to condensation.

Rising around 7am I find the bag's surface seriously wet. I'm warm and dry inside still, but the tent inner is seriously soaked around its middle and it becomes clear that the pole tunnel seam has been letting in water. The foot of the inner, and my bag, along with the head end, including all my clothes there, are totally dry. There's a puddle on the floor in the middle of the inner and the pockets, containing my phone, camera and Kindle are both wet, being at a point near the lower end of the pole sleeve. Thankfully nothing's damaged, but I'm disappointed. It's the first Hilleberg tent we've bought and, at £600 (far and away the most expensive tent we've ever bought) I expect better. Previously, we've only used Terra Nova tents and both manufacturers claim their tents shouldn't need seams sealing but Terra Nova suggest doing so if you want guaranteed waterproofing, whereas Hilleberg do not. Given I've yet to stuff the damp bag into its compression sac I'm thankful I don't plan on a second night. It'd be a different issue with such a failure on a multi-day trip.

Resolving to address the issue with Hilleberg, I breakfast on "Geoff's secret recipe muesli porage", lashings of coffee and choccy biccys. Chris calls to me, asking when I might be ready for off. We agree on 40 minutes. The wind's still howling. The rain's still lashing.

Packing inside our tents, we emerge within minutes of each other and take each tent down two-handed but I still suffer a slightly bent pole. It's proving to be an eventful trip.

As the rain eases for a moment I take these quick pics of our pitch and you can see the problem with the wind on the Enan; and yes, I do know how to pitch a tent properly. Chris's Akto looks marginally better due to the twin poles and, hence extra guy lines at the end. 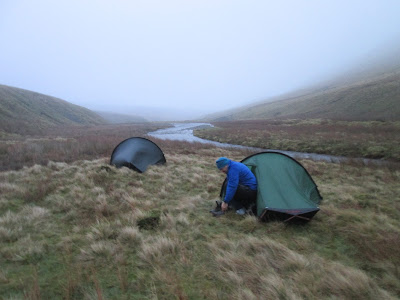 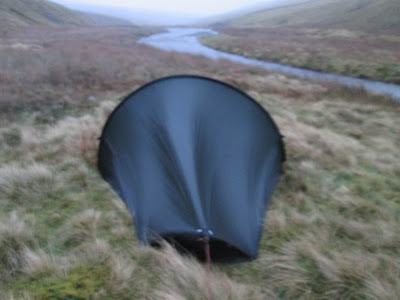 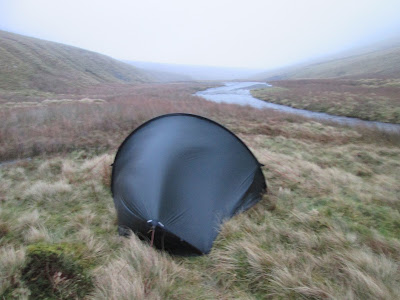 Now, we're off. The wind is funneling down the valley and I can't face heading straight into the teeth of it so we agree to tackle our intended route over West Fell, back to the Calf.

To say it's a tough walk would be a gross understatement. It's many years since I've experienced such a hard walk in the hills, evoking memories of rescue callouts when nobody but a rescue team would've been out on Kinder. It really is bloody awful. We plod uphill. First into the wind then, as we ascend, the wind becomes south westerly, constantly challenging us to stay on our feet. Sometimes it's blowing my trekking poles so much I give up on them, the benefit I'm gaining outweighed by the fight to place the poles.

I'm wearing my Paramo Aspira smock and Berghaus Paclite overtrousers over my Rohan Striders. As I walk I can feel damp around my most personal, private bits. Gradually this changes to wet across my thighs. I remember this happening before, exactly 26 years ago on a January walk over Dow Crag. Then too it was rain and a howling gale. I had been wearing Mountain Equipment Goretex over Rohan salopettes and was wet, right down to my undies.

Frankly, I just want to sit down and cry for my mummy. But we need to get back. I dig deep, wondering if Chris is suffering like me. We pause. He looks at me and says, "I'm having a bit of a crash", or something similar. Relieved, I tell him I'm right on my limit. We do our best to grin and push on. Meeting our outbound route at a saddle we pause and fuel up. There's a slight lull in the wind here. Then we press on, pass the summit of the Calf and agree to retrace steps from yesterday instead of a longer planned return route. Spirits are raised as we begin to descend. Always a telling point, we begin to chat again and, as we approach Sedbergh, we're laughing, talking of how long that walk will live in memory. How it'll become a tale to tell.

In Sedbergh, first stop is Smatt's Duo cafe again and we warm ourselves with coffee and butties, chips for Chris, sausage for me. A free, filter coffee refill lifts my tight-fisted spirits still further and we're off back to the car. I strip off my Aspira top to find my shirt virtually dry, moist only with sweat. My trousers and undies are wet through. I replace them with spares and merino long johns; not the best of looks but at least I'm warm and dry. An interesting comparison though, between the performance of a Paramo top as against Goretex overtrousers in identical conditions. I've long known that atmospheric conditions can affect the performance of Goretex, but had never made such a direct comparison with Paramo. There ya go eh? Make of it what you will.

While writing this I received a reply to an email to Hilleberg this morning. My message detailed the problem just as I have above. Here's their response:

Enan is made in a very thin fabric.

We will have to look at the tent to decide if the seam is a warranty issue.
Just contact your retailer to make a claim.

It is obvious that the seams in your tent doesent keep out the rain after the heavy winds.
It could be repairable with some seam sil and if you like I could send you a tube?

Slightly strange answer, but, suffice to say, I've just emailed Taunton Leisure to send it back to them in accordance with Hilleberg's, sort-of, advice. I'll let you know how we get on.

On a further note re the Enan. We've noticed there are attachments for two extra guys on the triangular ends. Chrissie emailed them this morning and they say you can add extra guys. In addition, their website says you should ALWAYS use ALL guying points EVERY TIME you pitch the tent. But they don't supply guy lines or pegs to do that. Of course, that means they can quote super, super light weights doesn't it (as do most other tent manufacturers)? Me ... a cynic? Surely not.