Chrissie had no teaching on Friday so after a quick turnround - Tilly and I only got back from our few days over in the East Riding on Thursday - we were off on a journey up to Malham and the Dales again. We had a quick Macdonalds lunch, fuelled up with Shell V Power diesel and hit the motorway. By 4 oclock we were set up, under a brooding moorland sky, in this beautiful location close to Malham Tarn. 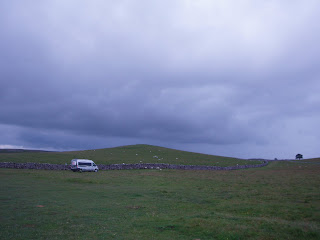 The scenery in these parts is typified by this pic showing the white limestone drystone walls. 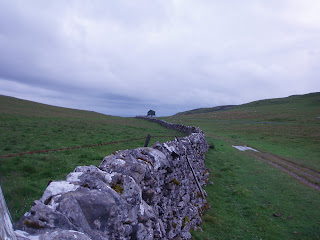 While the atmosphere in the van was typified by this scene of a hangdog lab doing her best Snoopy inpression. "When do I get a flippin' walk?" 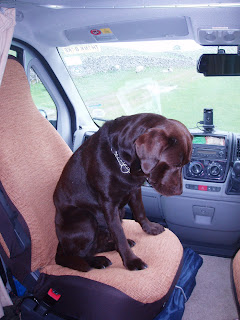 In the morning, C&D set off over Fountains Fell for one of the legs on the Pennine Way they'd been forced to miss earlier in the Spring. Tilly and I washed up from breakfast then wound a lazy route over single track roads to Horton-in-Ribblesdale. On arrival, we found more cars than I've ever seen in the village. Turned out there was a charity walk on. I'm never sure about the validity of these events. Why, as a society, can't we support charities without the need for hundreds of people descending on one small honeypot in the countryside? I'm probably wrong but there have to be better ways. Anyoldhow, we eventually found a parking space up a quiet, dead end road on the outskirts of the village. After packing a quick lunch we made for the summit of Pen Y Ghent, hoping to meet up with C&D. The route was much too busy for my liking but, nevertheless, we made the top in good time and settled down for a rest to await the travellers. Once we'd met up we reversed our route back down to Horton, pausing for a look back at the imposing hill. 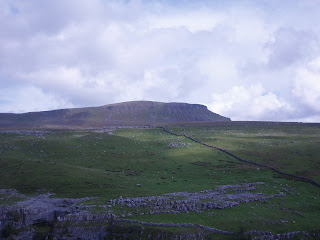 We had a good view of this waterfall, which crashed into the pool below before meandering a short way down the valley only to disappear into one of the many subterrainean chambers which form part of the extensive cave system in this area of the Dales. 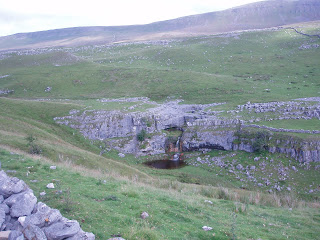 Before returning to the van, I discovered what happens when you stare like a fool at the front of your camera to watch the lens cover close as you hit the power button ... but you press the shutter release instead. 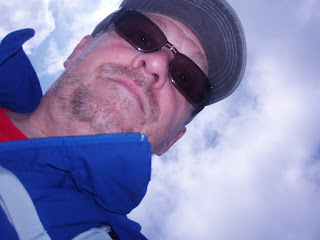 What a berk!
We passed a quiet evening and night on the aforementioned lane in Horton. Next morning Chrissie woke with a bad migraine, so her planned route to Hawes was off. Thirteen miles with a headache's no fun. Instead, we took the dogs for a short walk up the track near Helwith Bridge then meandered slowly back home.
This was likely to be our last van outing before the Pyrenees in just a couple of weeks.
Posted by Geoff Crowther at 20:58